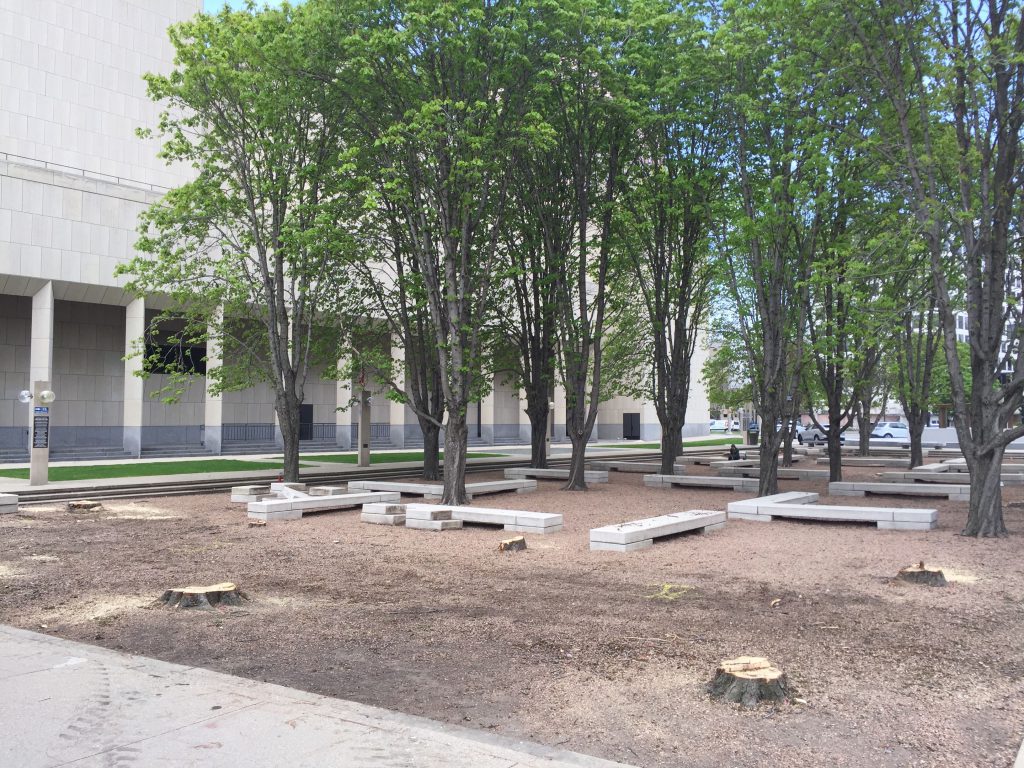 Many of the horse chestnut trees have been cut down. Photo by Dave Reid.

On Mother’s Day eve, over half of the 32 just-budding horse chestnut trees at the Marcus Center for the Performing Arts were felled, leaving an eyesore in the heart of downtown Milwaukee. The calculated devastation also smacked Milwaukee’s venerable Socialist heritage. The chainsaw ballet was abetted by the dismantling of representative democracy regarding public assets in Milwaukee County.

County Executive Chris Abele now has authority to decide the fate of all county property not specifically zoned parkland, sometimes for generations if not forever–without any public process. In a July 8, 2015, memo, then Milwaukee County corporation counsel Paul Bargren spelled out powers granted Abele: “the executive could lease, sell or convey any non-park county property regardless of Board policy and without Board approval.” He added: “The new provision gives the Executive the ability to ‘construct, purchase, acquire, lease, develop, improve, extend, equip, operate and maintain all county buildings, structures and facilities.’”

In 2016, Steve Hiniker, then executive director of 1000 Friends of Wisconsin, called Abele’s powers an “absurd corruption of the democratic process…It’s a horrible, horrible precedent to grant this much power over public land to one person.”

Abele wrested these powers—ones not granted other Wisconsin county executives–by getting language quietly tucked into the 2015 state budget bill (Act 55). Republican State Sen. Dale Kooyenga of Brookfield, then an Assembly member, introduced the provisions; some were initially even more extreme. Kooyenga is one of many local, county and state elected officials bankrolled by Abele through personal campaign contributions and political action committees (PACs) he controls. The list of politicians beholden to Abele keeps growing.

The Demise of an Urban Natural Cathedral

With Abele’s blessing, Marcus Center CEO Paul Mathews ordered the haphazard hacking of the grove designed by internationally renowned landscape architect Dan Kiley, Mathews repeatedly had said the trees were of no use to the nonprofit corporation managing the public facility. A chainsaw crew quickly disfigured the elegant natural cathedral gracing one of Downtown’s busiest corners. Marcus Center executives intend to install a lawn there for events, including private rentals. The Marcus Center’s website lists 12 existing interior and exterior venues within the complex that serve as rental spaces “for groups of 25 – 2300.”

Taxpayers support the Marcus Center’s capital and operating budget. Nonetheless, neither the Abele administration nor the Marcus Center conducted any transparent public process before proposing or executing the controversial landscape demolition. When the County Board allocated $10 million for Marcus Center in 2016, including millions for “plaza improvements,” no mention was made about demolishing the grove.

This now-maimed Marcus Center oasis is just one of the many Milwaukee County public assets subject to encroachment, takeover, and even sell-off as private exploitation trumps public process and taxpayers’ rights. Abele’s unparalleled powers allow him to execute deals lacking public accountability. In this case, Abele endorsed and permitted demolition without ever publicly saying or writing anything about the issue. In April, Abele privately regaled me and others about his appreciation of Dan Kiley, whom he met, and his intention to write a letter supporting historic designation. He then stonewalled repeated requests for confirmation of his remarks.

Valuing the commons—all that we share collectively—has been fundamental to greater Milwaukee’s development. Pragmatic “Sewer Socialism” began as a force in the 1890s. Socialist mayors governed Milwaukee from 1910-12 and again from 1916-1940 and 1948-1960. Emil Seidel, Milwaukee’s first Socialist mayor, wrote:  “We wanted our workers to have pure air; we wanted them to have sunshine…we wanted a chance for every human being to be strong and live a life of happiness. And, we wanted everything that was necessary to give them that: playgrounds, parks, lakes, beaches, clean creeks and rivers…”

Public assets meant to serve all are crucial to quality of life. Public spaces are the grounds where American democracy became rooted and can be expressed. They also drive economic vitality.

Nonetheless, what could be dubbed the “Abele Doctrine” has led to ever-increasing “dumping” and diminishing of the commons in Milwaukee County. This doctrine relies on deals and plans often shrouded in secrecy. Abele’s attempt to sell O’Donnell Park, planned in the dark for two years, was defeated by the County Board in 2014. Subsequent deals involving memoranda of agreement, leases and other contracts leave the public out of the loop and with little or no available recourse about decisions harming the public’s interests.

To be clear, I am not referring to philanthropic support of public assets, including friends groups and conservancy agreements supporting responsible stewardship of a public facility. Arrangements created to protect and preserve assets to benefit the public are sometimes called “public-service partnerships” rather than the vague “public-private partnerships.” The latter catch-all term can include exploitative deals that sell the public’s interests down the river.

Milwaukee County residents face threats of ever-greater allowance of private interests unaccountably controlling public facilities. Some deals limit or eliminate public access, including by requiring payment for use. Some devalue or destroy the cultural or historical value of legacy spaces, as happened with the Kiley Grove. Community events can be ejected from public facilities, such as the 2018 proposed eviction of the popular Winter Farmers Market from the Mitchell Park Domes Annex. Abele also tried to hire a private vendor to charge residents up to $3.50 per hour to park vehicles in county parks. Other proposals have included appropriating much of Milwaukee’s only other downtown riverfront green space for a private beer garden in Pere Marquette Park.

Essentially, there is no end to private deals Abele can execute outside of public scrutiny for any public asset lacking parkland zoning, including agricultural and open-space lands, the county airport and zoo.

Like frogs getting used to living in water gradually heated to the boiling point, some Milwaukee County residents have become inured to government in which taxpayers no longer have any say about what happens to their assets. Robbing citizens of a voice about what they hold in common now often merely elicits a shrug.

As public assets acquired and stewarded for eons are handed over to unaccountable entities, sometimes for up to 99 years, Milwaukee County residents still have options beyond acquiescence.

Many concerned design professionals, donors and others, reached out to Marcus Center executives and their architect Jim Shields to propose alternatives or compromises. No one has reported Marcus Center representatives inviting any individuals to explore such creative options in search of building community consensus for a productive solution.

Marcus Center officials’ scorched-earth stance, condoned by Abele, has indeed left scorched earth in a former place of urban beauty and respite. The Cultural Landscape Foundation, which supported local efforts to save Milwaukee’s Kiley Grove, called its demise a “loss for landscape architecture, a disgrace for Milwaukee.” 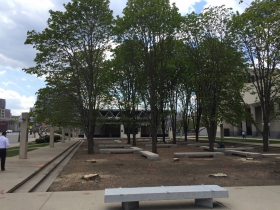 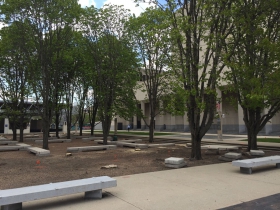 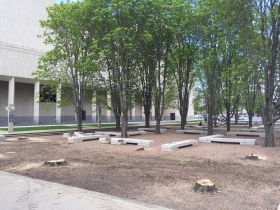 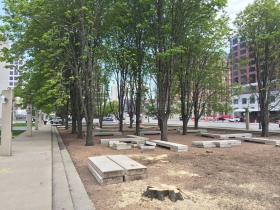 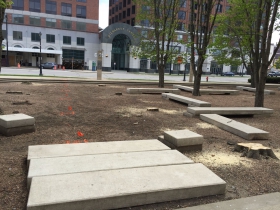 3 thoughts on “Op Ed: Requiem for the Commons”