The Surprising Strength of Obamacare

Health exchanges working better than ever, particularly for Trump supporters.

The Affordable Care Act (ACA) or Obamacare, as it was dubbed, faced problems not long ago. Between 2014 and 2016, the individual health insurance market underwent a financial crisis. Most of the insurance companies that signed up for the ACA exchanges lost money, having underestimated the medical needs of their subscribers. As a result, many insurers announced they were leaving the market.

In southeast Wisconsin, the exodus included the dominant health care insurers, such as United Healthcare, Humana, and the descendants of the Blue Cross/Blue Shield plans. It was widely feared that much of the United States would be left without a single insurance company offering individual plans on the exchanges.

Early this month, a report from the Kaiser Family Foundation suggests the situation has completely reversed. The graph below plots Kaiser’s estimates of the monthly average gross margin (of profit) per member between 2011 and 2018. The exchanges (as well as the Medicaid expansion) took effect in 2013. The monthly averages for the nation are shown in green and those for Wisconsin in yellow. 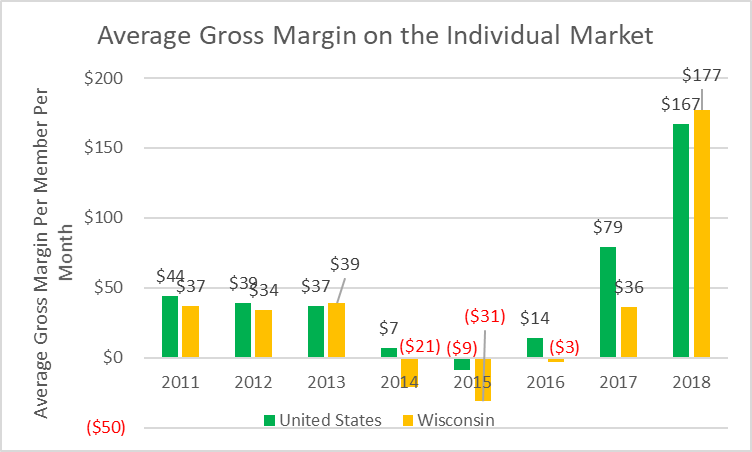 Having over-learned the lesson of 2015, the insurers are now faced with excess profits. By law, they are required to spend at least 80 percent of their revenues on benefits. When the “Medical loss ratio” drops below that number, they are required to return the difference to their subscribers. According to Kaiser, insurers are expecting the rebates to total about $800 million.

Currently the exchange (Healthcare.org) for the Milwaukee area offers 46 plans from four organizations– Common Ground, Molina, Network health plan, and Childrens health plan. The latter three groups are also available for people qualifying for Badgercare Plus, Wisconsin’s Medicaid. Given the high current returns, it seems unlikely that any of the current participants will want to leave. In fact, the market seems poised to see the entry (or re-entry) of others.

However, any company or non-profit contemplating entering this market must take into consideration its uncertainty. That’s been caused by a lawsuit, recently endorsed by the Trump administration, which attempts to convince the courts to declare that the ACA is unconstitutional, eliminating the penalty for not having insurance (the “individual mandate”) starting this year, and the continued hostility from Republican officials.

Why those officials think taking away people’s health insurance is good politics is a continuing mystery. It has been widely noted that the anti-ACA leadership comes from politicians whose constituents are particularly vulnerable if the program went away.

Consider the case of rural hospitals that are struggling to survive. The next chart, based on a recent study by the US Government Accountability Office, compares the percentage of rural hospitals in each of nation’s four regions (shown in yellow) to their percentage of the hospital closures between 2013 and 2017 (in green). The South, with 38 percent of the nation’s hospitals, has 77 percent of the closures, far ahead of the nation (the Midwest is second, with 11 percent of all closures). 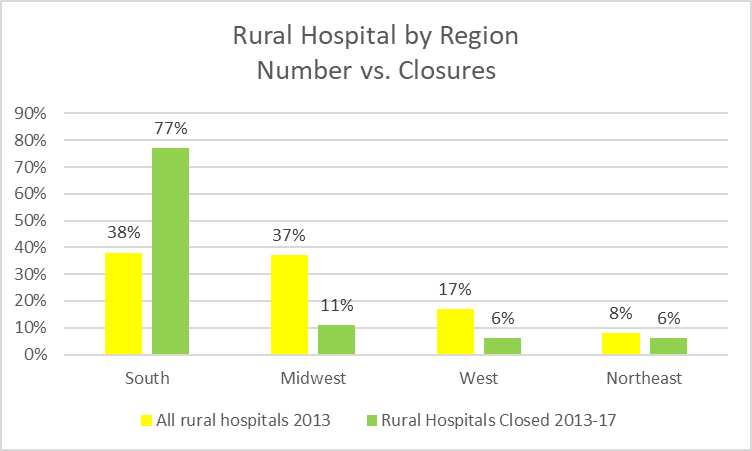 The ACA, particularly by expanding Medicaid and subsidizing health insurance for low-income consumers on its exchanges, expands the number of people who can pay for hospital services, helping the hospitals’ financial condition. This is supported by the evidence cited by the GAO. As the graph below shows, states that chose not to expand Medicaid, in green, contained about half the rural hospitals, but 83 percent of the closures. 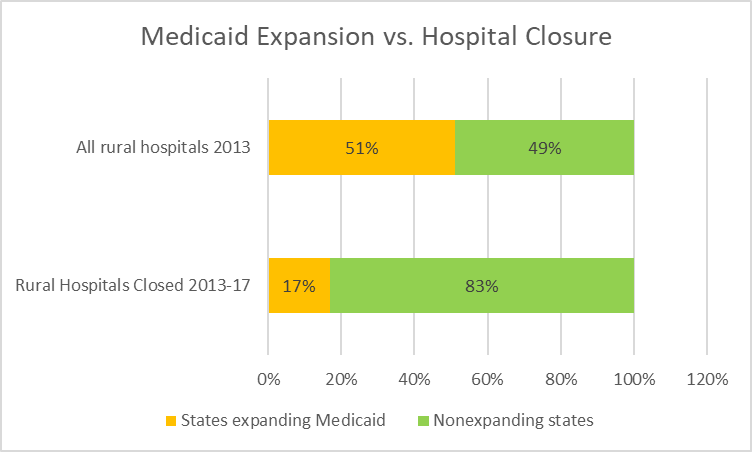 By backing a flimsy, state-initiated lawsuit to throw out the entirety of the Affordable Care Act, President Trump has made himself and Republican candidates in 2020 vulnerable to attacks that they want to take health insurance away from millions of people.

The authors argue that there are several steps that could be taken to further reduce the number of people without insurance under current law. Most uninsured people, they argue, apart from undocumented immigrants and low-income residents of states that did not expand Medicaid, qualify for insurance today. (For their trouble, the authors were denounced by the right for compromising with Obamacare, and the left, for not pushing a single payer model.)

The “flimsy lawsuit” is called “Texas v. US” or “Texas v. Azar” for the current US Secretary of Health. It was brought by several Republican states under the leadership of Texas and, formerly, Wisconsin and aims to have the courts declare unconstitutional the whole ACA. Why this is considered good politics, let alone good governance, is unclear.

The argument behind the suit goes like this: The Trump tax act set the individual mandate in the ACA to zero. The US Supreme Court had earlier upheld the mandate because it operated like a tax. But a tax of zero is no longer a tax, making the mandate unconstitutional. However, the mandate is crucial for the ban on rejecting people with pre-existing conditions or charging them more. Thus, this ban must fall. And because the parts of the ACA were designed to work together, the whole ACA must fall as well. So goes the argument.

This logic, flimsy as it is, was accepted by a federal judge in Fort Worth. The Trump Department of Justice, defying the norm that it defend US law, recently flipped, agreeing that the entire ACA should be invalidated.

This argument is full of holes and gets flimsier with time. First, the notion that an individual mandate accompanied by a zero tax is more of a burden than one with a tax of several hundred dollars defies common sense. Second, the exchange, the only part of the ACA coverage that is vulnerable to getting rid of the mandate, has proven more durable than either its supporters or critics believed, as demonstrated by the excessive gross margins. Most people buying insurance on the exchange get subsidies that protect them from a higher-cost risk pool. Finally, the ACA has a huge number of provisions that stand on their own, even if the protections for pre-existing conditions went away.

Thus, it becomes increasingly difficult to argue that the exchange is likely go into a death spiral, where healthy people are driven out by steadily rising premiums. Instead, the likely effect of the Trump sabotage is an increased number of uninsured people and more costly premiums, particularly for people who don’t qualify for the subsidies.

Recently, the Washington Post published an account of the heart-rending decision to close a rural hospital in Osage County, Oklahoma. In 2016, Trump won every county in Oklahoma. In Osage County his margin was better than 2-1. Yet this is exactly the part of the country most helped by the ACA.

3 thoughts on “Data Wonk: The Surprising Strength of Obamacare”