City Will Borrow for Police Settlement

Milwaukee has borrowed many millions to pay off police legal settlements in last decade.

By Gretchen Schuldt, Wisconsin Justice Initiative - May 14th, 2019 12:11 pm
Get a daily rundown of the top stories on Urban Milwaukee

The City of Milwaukee, just five months into the year, already is in the borrowing mode to pay off court settlements related to police conduct, a financing strategy that increases costs for taxpayers.

Interest alone could add a million dollars or more to the total price tag over the life of the bonds, depending on their longevity and interest rates.

Ideally, state and local governments use bonds to pay for large capital projects that are expected to last a long time, like roads, bridges, and schools. Borrowing for these types of projects allows governments to spread the costs over decades to ensure that future beneficiaries of the projects share in the costs.

Borrowing for police-related settlements, however, is on the increase not only in Milwaukee, but across the country.

Here, Yaccarino said: “It is a challenge to continue to budget core city services with no growth in revenues and have no ability to set up a funding mechanism for court settlements that eliminates borrowing without impacting those core services.”

The city traditionally has relied on a $5 million contingent fund to pay settlements that exceeded the amount budgeted for them, he said.

This year, though, snow and ice removal costs are running $4.3 million over budget, melting away much of the contingent fund, Yaccarino noted.

The city’s uncomfortable position is not unique to 2019. Budget figures show it is now common for the city to pay out more in damages and claims than the total $5 million budgeted in the contingent fund. 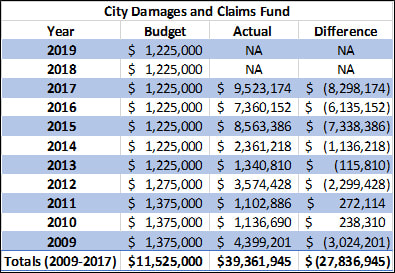 Last year, the city borrowed $6.2 million to cover damages and claims like the police-related lawsuits it needs to borrow for now, according to city bonding documents.

“Cases normally take a long time to settle or take to court,” Yaccarino said in an email. “If the case is taken to court, I would assume we would win the case and not fund a settlement. Determining when the City takes a case to court can take a considerable amount of time as well. Occasionally a breakthrough happens and the parties settle just before we go to trial.”

The city also wants to be vague about what it expects to pay out in settlements because it does not want to let courtroom opponents know what it anticipates spending, Yaccarino said.

Still, the city has for several years put less money in its Damages and Claims fund than it needed to pay out. There is $1,225,000 budgeted in the account; that amount has not changed since 2013, when it was reduced by $50,000, according to city budget documents.

The 2013 amount was would be worth $1,359,416 in today’s dollars, according to the U.S. Bureau of Labor Statistics’ inflation calculator, meaning the annual amount put aside for settlements has gradually dropped in value.

One thought on “Court Watch: City Will Borrow for Police Settlement”