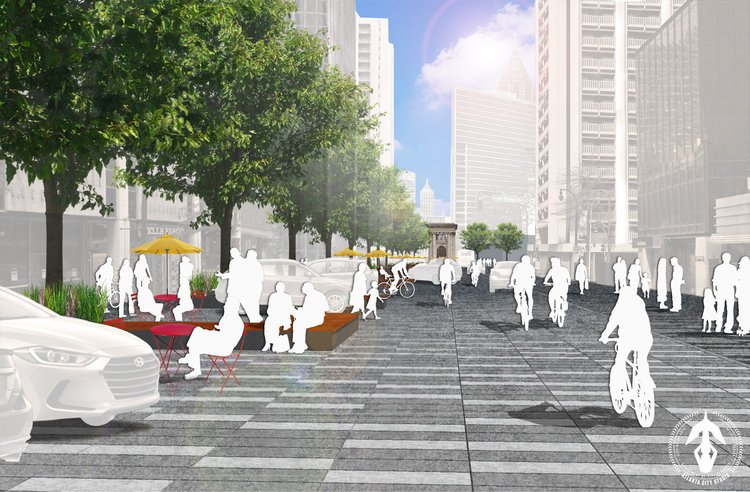 A rendering of a redesigned Peachtree Street in Atlanta, GA. Rendering by Atlanta City Studio.

The Importance of Shade: Sam Bloch tells the story of shade in Los Angeles, which comes as a universal yet understated privilege in wealthier parts of the city. Bus shelters, for example, have mainly been installed in wealthier areas; shade-less bus stops marked by posts dot low-income neighborhoods instead. This inequity is amplified as heatwaves become more commonplace in the city. Low-income neighborhoods have responded by building their own makeshift shade shelters in yards and planting trees to adequately shield from the sun. Bloch also mentions Downtown’s Pershing Square, where shade was intentionally minimized in the park’s design to clear out “deviates and criminals.” Street trees and shady urban design should not be considered privileges. (Sam Bloch | Places Journal)

BRT’s Great Success in Mexico City: Bus Rapid Transit, known locally as Metrobús, has become a city staple, now moving 1.5 million riders daily. BRT first opened in the city along Avenida de los Insurgentes in 2005, and the system has since grown to seven lines. The system is especially convenient for the city’s working class residents, as a one-way fare costs only six pesos, or about thirty cents. Mexico City decided to build the system 20 years ago, citing congestion and severe air pollution. Metrobús utilizes low-emission buses that each have a capacity of 240 riders. Relative to the city’s metro system, building BRT costs 20 times less to similarly decrease pollution and serve as an alternative to driving. (Zeninjor Enwemeka | WBUR)

Atlanta Considers a Woonerf: For a two-mile stretch of Peachtree Street in downtown, Atlanta is proposing a Dutch “woonerf” or “shared space. The design would remove physical barriers between sidewalks and streets, most notably curbs, and give pedestrians freedom to roam. Drivers would still be allowed to travel through, but must do so slowly while constantly negotiating right-of-way with pedestrians. It may sound counter-intuitive, but great successful woonerf designs in Europe have demonstrated that reducing separation between drivers and pedestrians actually improves safety. The plan is still in the early stages, but the city is preparing to launch a feasibility study to create its “Time Square of the South.” (Angie Schmitt | Streetsblog USA)

A Geocode Is not an Address: In Puerto Rico, an outdated and dysfunctional addressing system hampers Hurricane Maria relief efforts in that thousands of FEMA aid applications cannont be processed because properties can’t be located. The lack of 911-compliant addresses also “makes it difficult for emergency responders to locate homes and businesses.” Part of the dilemma lies in historical Spanish naming conventions that cannot be properly inputted to databases in English. Updating Puerto Rico’s addressing system has been estimated to cost $200 million. Geocodes, unique codes that correspond to geographic coordinates, have been proposed as a cheaper alternative. Chris Mellon argues, however, that geocodes are not enough, as they erase a place’s identity and history. They serve an administrative purpose, but cannot provide a location in a cultural landscape as addresses do in both time and space. (Chris Mellon | Wired)

I think that the availability of an on-demand car has made it easier for people to travel to areas of the city that they would not ordinarily have gone to if they had to go by subway or by taxi. So that these people who visit out of the way neighborhoods-usually where low-income people live-they are agents of gentrification.

–Sharon Zukin in ArchDaily discussing her belief that cars have accellerated gentrification.

This week on the podcast, Alexander Stahle talks about putting together a street design guide for Sweden.