By Laurel White, Wisconsin Public Radio - May 3rd, 2019 10:50 am
Get a daily rundown of the top stories on Urban Milwaukee 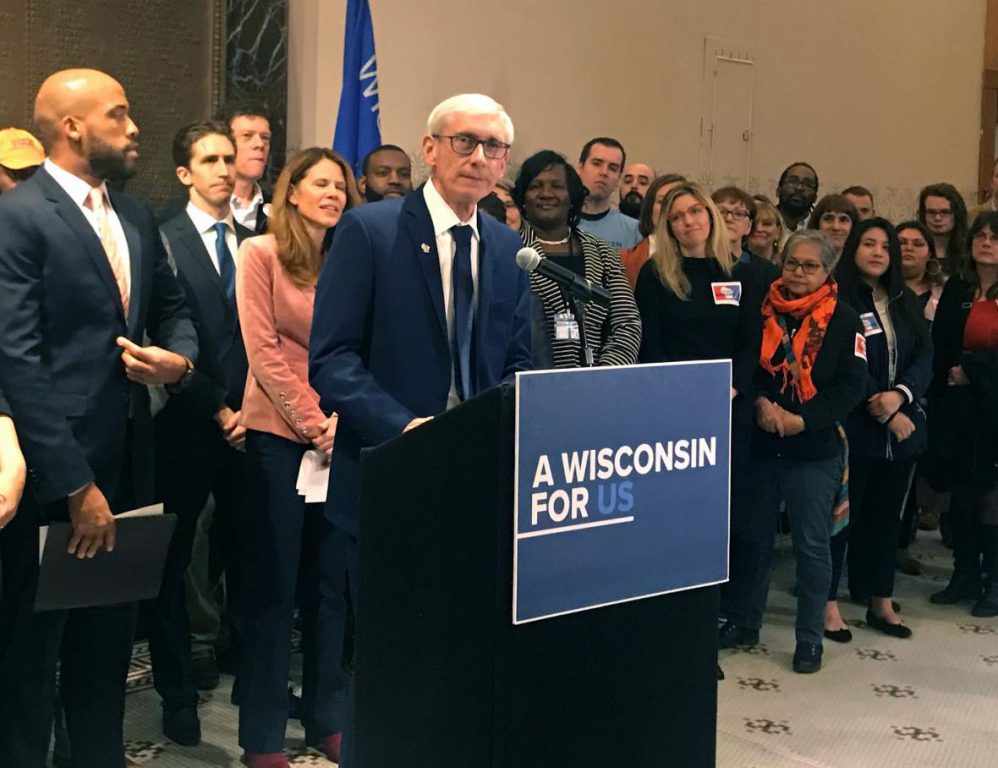 Gov. Tony Evers said Thursday he will “fight like hell” for an expansion of Medicaid in Wisconsin, despite new statements from Republican leaders that they intend to strip the plan from the state budget.

On Wednesday afternoon, the Republican chairs of the state budget committee released a statement saying they will remove all “non-fiscal” items from the governor’s budget proposal, including the Medicaid expansion.

The expansion is particularly important to the Evers’ two-year spending plan, as his administration has estimated the expansion would free up $320 million in state funding over two years, allowing the state to invest in other things.

State Department of Health Services Secretary-designee Andrea Palm has called the expansion the “anchor” of her department’s budget.

Wisconsin’s Medicaid program, BadgerCare Plus, covers people who earn up to 100 percent of the federal poverty level, or about $12,500 per year.

By taking the full Medicaid expansion, that coverage would effectively be expanded to people who earn up to 138 percent of the federal poverty level, or about $17,200 per year.

According to the Kaiser Family Foundation, Wisconsin is one of 14 states that hasn’t taken the additional federal money.

Former Gov. Scott Walker first rejected the federal Medicaid expansion in 2014, a move that has cost state government more than $1 billion, according to the Legislature’s budget office.

Walker argued expanding Medicaid could come with unexpected costs for the state down the road and would increase insurance costs in the private market.

Republicans lawmakers, who maintain strong control of the Legislature despite losing the governor’s office, have continued that argument. They have voiced concerns about the governor’s plans to expand Medicaid for several months, including sharp criticism after Evers’ first State of the State address in January.

Assembly Speaker Robin Vos, R-Rochester, said Thursday at a press conference in Milwaukee that he continues to oppose the Medicaid expansion.

“Under his plan, we will actually see the potential of over $500 million increased costs in the private sector,” Vos said.

Vos also said he believes those who would be covered under the expansion can already get health insurance through the Affordable Care Act. But added that he is willing to work to make sure individuals who haven’t taken advantage of that are able to do so.

“But we are never going to do it in a way that undermines private sector health insurance, drives up their cost, all while putting the taxpayers of Wisconsin at greater risk, should something change in Washington, D.C.,” he said.

Other proposals from Evers slated for deletion from the budget include legalization of medical marijuana, creation of a nonpartisan redistricting commission to oversee drawing of legislative district maps, a cap in statewide voucher school enrollment and limits on a tax credit program for manufacturers.

GOP leaders have said they expect the governor to pursue some of those proposals as legislation separate from the budget.

Democratic state lawmakers were very vocal on Thursday in their opposition to the planned Republican action.

“Republicans politicians are, once again, not listening to the people of this state,” said Rep. Chris Taylor, D-Madison.

Democrats pointed to strong public support for a number of the issues in the governor’s budget, including the Medicaid expansion.