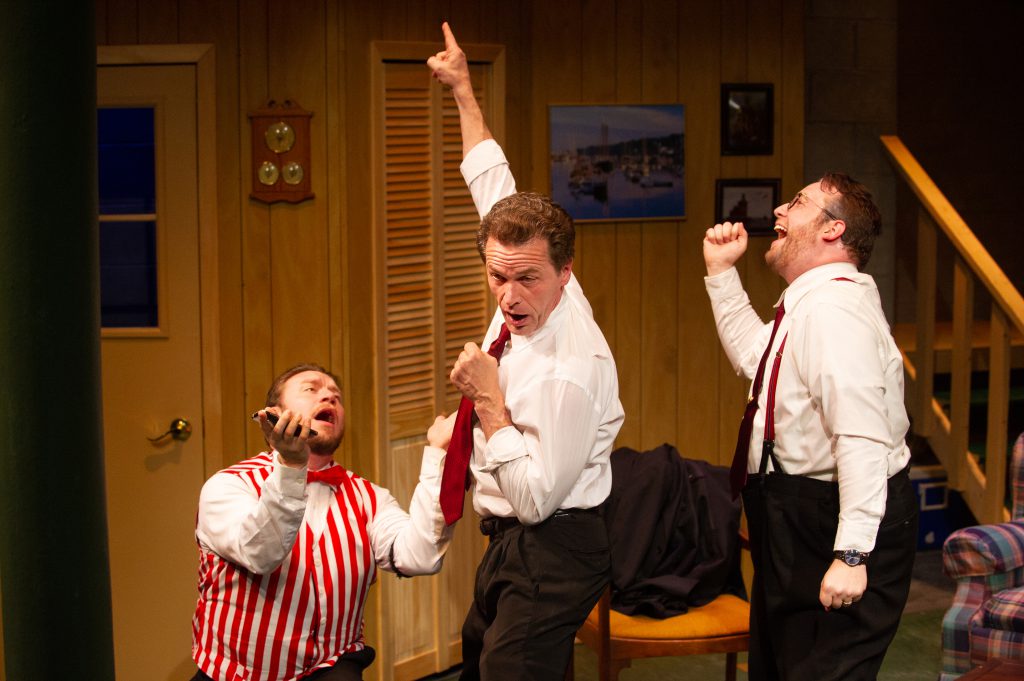 The Fabulous Lipitones is the last season production ever for In Tandem Theatre at the 10th Street Theater, though founders Chris and Jane Flieller are hanging on to the In Tandem name for whatever future opportunities emerge. Those who admire their contribution to Milwaukee’s culture only have this show (running until May 19) as a sure opportunity to say thanks.

In a frank note inserted into the program, without the tears that many of their thousands of patrons might expect, the Fliellers itemize their success with some 88 productions in 21 years. I’ve seen many of those and In Tandem could always be counted on for professionalism on a shoestring and a spirit of fun and caring – and sometimes greatness — within a variety of high drama, low comedy and revivable musicals.

Its last show is more down to earth. The company is going out with that fun and professionalism though The Fabulous Lipitones is more mischievous than convincing farce and is overplayed by its cast of four. It’s enjoyable but unmemorable, unlike some other Flieller productions that stick in the brain for years.

These are some decent actors who have been polished in the barbershop demands and may learn over the run that, though this isn’t the greatest material they’ve ever had, it deserves respect more than false pushing.

The farce begins cleverly with a big musical laugh at a funeral. The plot is centered on the death in mid high B-flat of the lead singer in a barbershop quartet and how the search for a replacement brings the remaining three social misfits to a deeper understanding of people and music.

The three actors become four and boy, can they sing barbershop. Any audience should relish those harmonies and like the play’s simplistic desire to make social points with the music. The finale, manufactured and unjustified as it may be, deliciously mixes and mocks the musical jokes in the show — Tom Jones, sea chanteys and Punjabi rhythms, all in barbershop choreography.

There is an obvious but well intentioned moral message. It’s about how life as well as harmonics requires treating each other decently and welcoming the gifts of the outsider. But the thrust of the play is mainly buried in sitcom wisecracks about a mama’s boy, muscle envy,  sex, inflated ego –- all stuff that makes the American middle class sound silly and look silly on TV.

Director Jane Flieller and choreographer Adam Estes are responsible for the smooth singing and coordinated hand gestures, but when emotional interaction is needed, they are relying too heavily on the basic gifts – and in some cases bad habits — the actors bring with them.

As Howard the tenor, Nathan Marinan relies on sincere persona and good voice, a simple approach that works best in his quiet moments. I have seen Steve Koehler get inside a role better in other shows, when his physical presence is matched by character insight. That’s missing here, but as the quartet’s bass Phil, he is a marvel at making a low baritone stun us with the bottom notes.

Rick Pendzich (Wally) is always a solid baritone and has better instincts as an actor than being displayed of late. Farce seems to bring out that little extra mugging.

The new member of the quarter, Bob, is also a new face for In Tandem, Ethan Brittingham, and a welcome one. The show’s comedy depends on Bob’s differences from the other three, and Brittingham captures those differences in look and movement. He is convincing when the play isn’t relying on event gimmicks to carry the story along.

Playwrights John Markus and Mark St. Germain are deeply experienced hands in TV and stage credentials enjoying a regional premiere with this offering. They’ve created what might be accepted as light froth if the cast didn’t punch the dialogue with metronomic predictability.  While the dialogue is too obvious in its jokes, it deserves gentler treatment than it gets here. 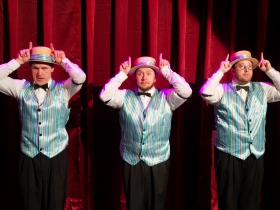 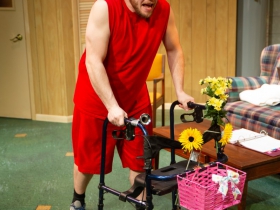 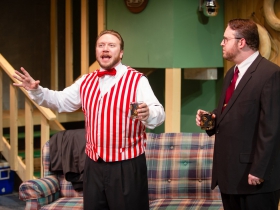