By Elizabeth Dohms-Harter, Wisconsin Public Radio - Apr 20th, 2019 01:16 pm
Get a daily rundown of the top stories on Urban Milwaukee 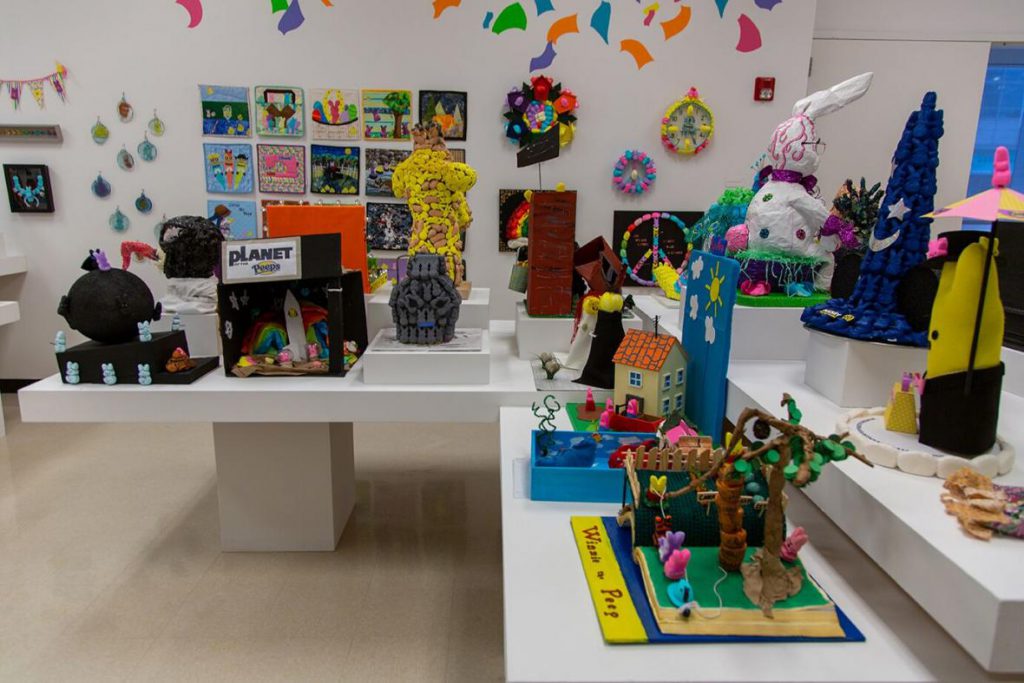 The PEEPS exhibit this year is the largest in a decade-long span. Photo courtesy of the Racine Art Museum.

There are PEEPS on a pirate ship and PEEPS on slippers. Some PEEPS gather at a diner and others tube down the river. Some are melted and crafted into sculptures.

But whatever they turn into, these PEEPS have earned an audience at the Racine Art Museum’s 10th Annual International PEEPS Art Exhibition.

The exhibit showcases works that fully embrace the quirky and goofy quality of these marshmallow treat some love and others love to hate. The exhibit, which opened Thursday and runs through April 28, embodies the creativity of more than 230 artists in 165 entries, culminating in the largest PEEPS show held in its decade-long span.

“There’s not a lot of very public celebrating going on in conjunction with the Easter season, and so this gets quite a bit of attention, considering it’s taking place in a relatively small community,” said Bruce Pepich, the executive director of curator of collections at the museum.

Lisa Englander came up with the idea in hopes of ramping up museum visitors during Easter. Englander, who manages guest relations and retail operations for the museum, thought she’d get about five submissions.

“She invited people to make a diorama or something that depicted PEEPS creatures or used PEEPS candy in its creation,” Pepich said.

Well outpacing her estimates, Englander received more than 30. Now that the exhibit has grown, Pepich said awards are granted to participants in children’s, families or groups and adult divisions. Fewer than a third of the participants have formal art training. The rest of the artists have proven that they can be just as clever and good with their hands.

Some of the creations feature PEEPS in their most recognized form — puffy chicks or full-bodied bunnies.

But other artists were more interested in what those peeps are made of, literally.

In a PEEPS iteration of Vincent Van Gogh‘s “The Starry Night,” artists Aaron Costic and Anik Zuleta melted the candy, applied it with a knife or spatula and mixed it with different paint before coating the surface with a gel medium.

“You can’t figure out it was made with PEEPS at all, so you can see that people are really experimenting with the material,” Pepich said.

The museum sets limitations on how big the PEEPS artwork can be so that it’s possible to showcase all the submissions, Pepich said. The PEEPS exhibit is separate from the museum’s main galleries, all of which can be viewed with an admission ticket. No other food can be used in creating the artwork for the justifiable reason that it could attract insects.

About 30 percent of the artists will donate their pieces to the museum, which will then be sold to help raise funds to underwrite the show.