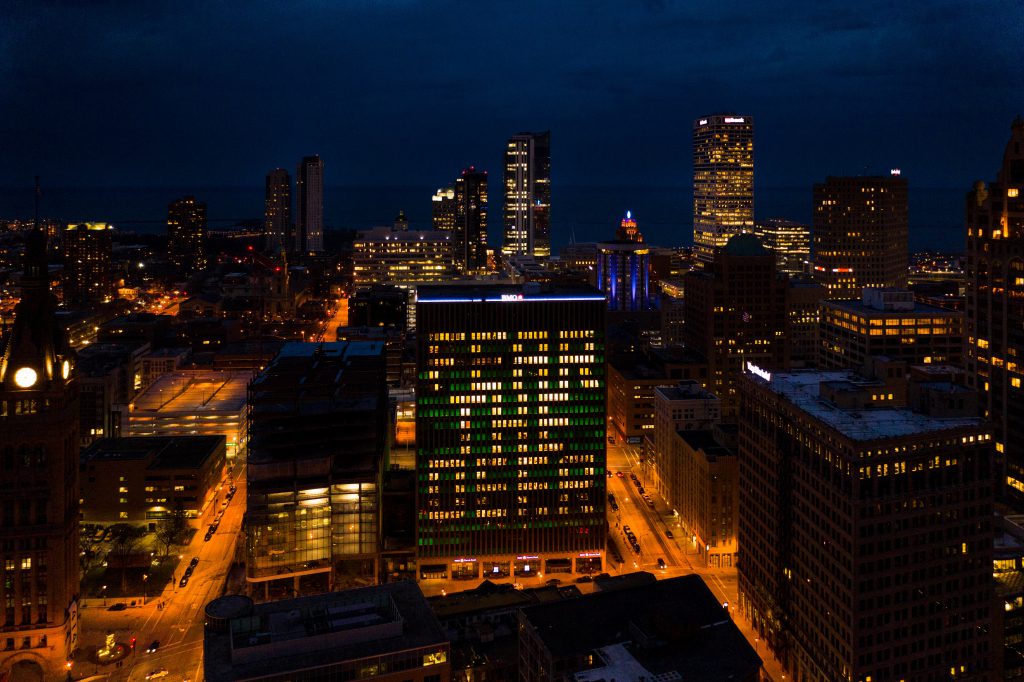 The windows of a downtown office building are all in on the Milwaukee Bucks playoff push.

BMO Harris Bank has lit 18 floors of its downtown office tower to spell out “Fear the Deer.”

And if towering window displays are your thing, make sure to take it all in. It could be the last time the tower at 770 N. Water St. is illuminated this way.

The bank has previously used the building’s facade to celebrate Summerfest and other marquee events. But BMO Harris Bank, which acquired M&I Bank in 2011, will relocate to a new, glass-clad tower in December.

The bank’s current tower will be lit up for Bucks first-round playoff series, which could end as early as next Monday.

The illuminated tower joins a green river, branded streetcar and activated plaza as branding the team is undertaking to build interest around the NBA playoffs. The team finished the regular season with the best record in the league.

Through a sponsorship arrangement, the bank is “the official bank” of the Bucks. And if you bank at BMO, make sure to bring your ID. Bucks star Giannis Antetokounmpo was unable to access his account despite having all kinds of memorabilia displaying his likeness.

Should you want anything else official from the Bucks, the team likely has it. The organization announced an official avocado last month.

Real estate development firm Irgens Partners, which acquired BMO’s existing tower and is building the new one next door, has yet to release plans for what it will do with the existing tower.

Built in 1968 for M&I Bank, the 20-story tower was designed by the architecture firm of Grassold, Johnson, Wagner and Ilsley. The’s building facade is defined by columns running the length of the structure.

Irgens has suggested the 332,905-square-foot building could be redeveloped into some combination of a hotel, “workforce” apartments or institutional office space. It was formerly the site of the St. Charles Hotel, and Irgens has released a conceptual rendering that contains signage for a hotel named after the site’s one-time occupant.