Early Music concert features the only culture on earth with this extraordinary musical style. 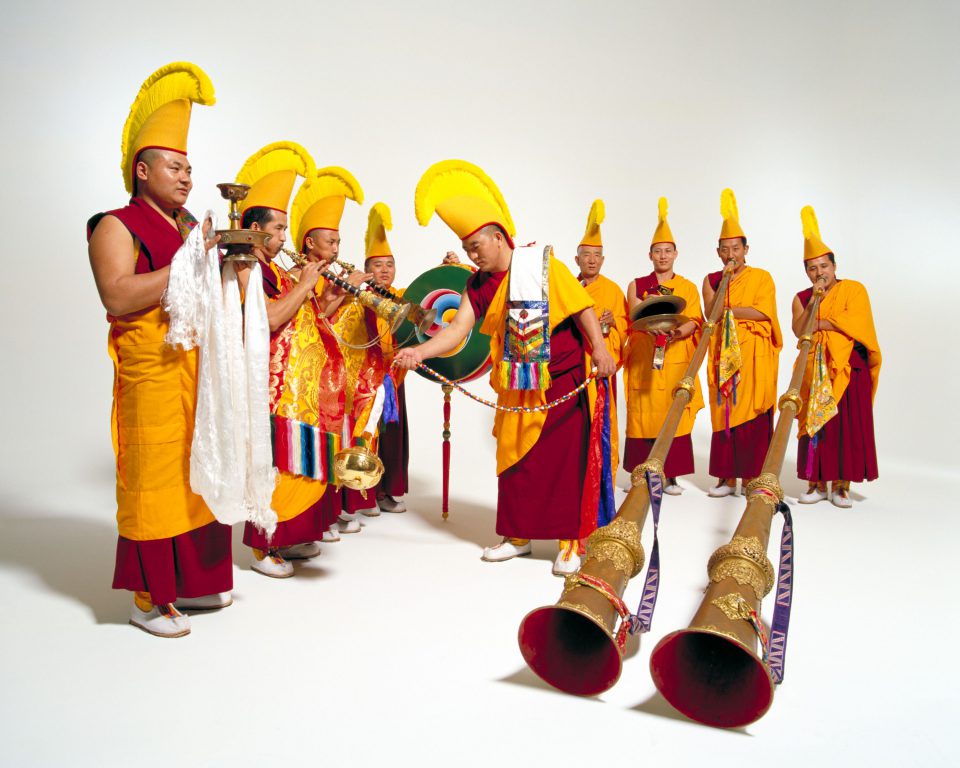 Early Music Now will host monks from the Tibetan Drepung Loseling Monastery this Saturday at the Tripoli Shrine Center. The monks will offer dance and chants from five to six centuries ago. But much of the music, instruments and other traditions go back millennia.

Tibetan Buddhism represents one important branch of the Buddhist faith. The Tibetan branch of Buddhism dates from the 7th century. In 1950, China annexed Tibet. In 1958, many clergy, including the Drepung Loseling Monastery, established exile locations in India.

Since 1988, the Drepung Loseling monastery has offered the cultural programs around North America. Complex motivations guide this outreach. The programs mix art, dance, music, religion, a bit of global politics and positive vibrations into a complete package. The Mystical Arts Tour also helps Tibetan Buddhists gain sympathy for their status – locked in exile from their homeland. But the outreach is subtle, rather than direct.

The visit to Milwaukee involves a week of activities. On Tuesday through Friday, the monks have been building (and destroying) an intricate sand mandala at the Milwaukee City Hall. Details of this event were published earlier this week.

The performance on Saturday, Mystical Arts of Tibet, mixes ceremony, dance, and chants. The program offers a selection of historic traditions that are a part of current practices. Student monks serve a year or two with the Mystical Arts Tour demonstrating their practices before returning to life at the monastery.

Chants begin with an Invocation of the Force of Goodness and include purposeful chants for Purifying the Environment, a Melody to Sever the Ego Syndrome and others. The closing work, Auspicious Song for World Healing, was written by the 14th (and current) Dalai Lama in 1959. 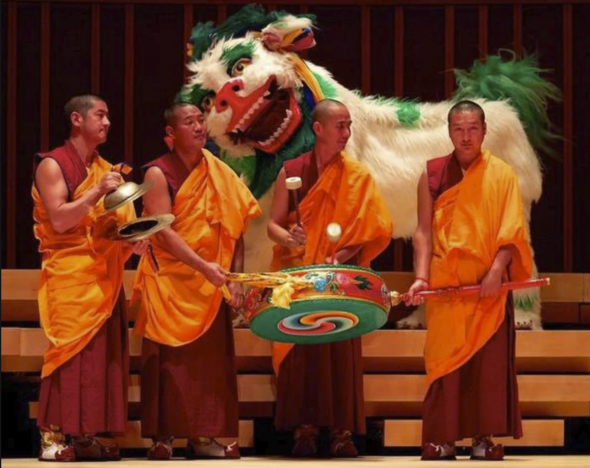 The program includes several theatrical costumed dances: The Snow Lion Dance, the Dance of the Skeleton Lords and others. Each also illustrates aspects of the faith.

Early Music Now concerts rarely reach back to before the 15th century. The legacy of Eastern traditions and instruments can be much older. The largest instrument, a dungchen (large Tibetan long Horn) telescopes to more than 8 feet. The sound has been described as “a long, deep, whirring, haunting wail that takes you out somewhere beyond the highest Himalaya peaks and at the same time back into your mother’s womb.” A gyaling (short horn) reed instrument fills the room with a continuous sound thanks to the technique of circular breathing. Treble sounds are supplied by a variety of percussion instruments.

The monks will also demonstrate a pedagogical practice of “inquiry” — students debating with one another as they explore further enlightenment. The audience will experience the choreography of this tradition, but not the text, which will be in Tibetan.

Skilled throat singers provide the most unique sound. The Drepung Loseling monks are particularly renowned for their multiphonic chanting known as zokkay (complete chord). Each of the main chantmasters simultaneously intones three notes. The overtones individually create a complete chord. The Tibetans are the only culture on earth that cultivates this extraordinary vocal ability.

The music and meditative practices have been adapted by many in the West who seek a secularized route to ‘mindfulness.’ The Drepung LoselingMonastery is collaborating with Atlanta’s Emory University in an Emory-Tibet Science Initiative to “build a bridge between two complementary systems of knowledge by educating future scientific collaborators who can contribute to new discoveries in the science of mind and body.”

To our ears, the chants inspire meditation, but the subtle distinctions make it difficult for the uninitiated to distinguish one chant from another. A spokesman will provide insight. The program offers those of us who are accustomed to the ambiance created by this meditative music to appreciate more about its origins and meaning. The universal character of this otherwise exotic tradition should be a captivating experience.

The Early Music Now performance on Saturday starts with a reception at 3:30 p.m., followed by a concert at 5:00 p.m. Tickets may be purchased online. The program will be offered at the Tripoli Shrine Center at 3000 W. Wisconsin Ave. Parking is available in the lot to the east of the building.