Prior to Saturday's concert, monks will build mandala this week at City Hall. 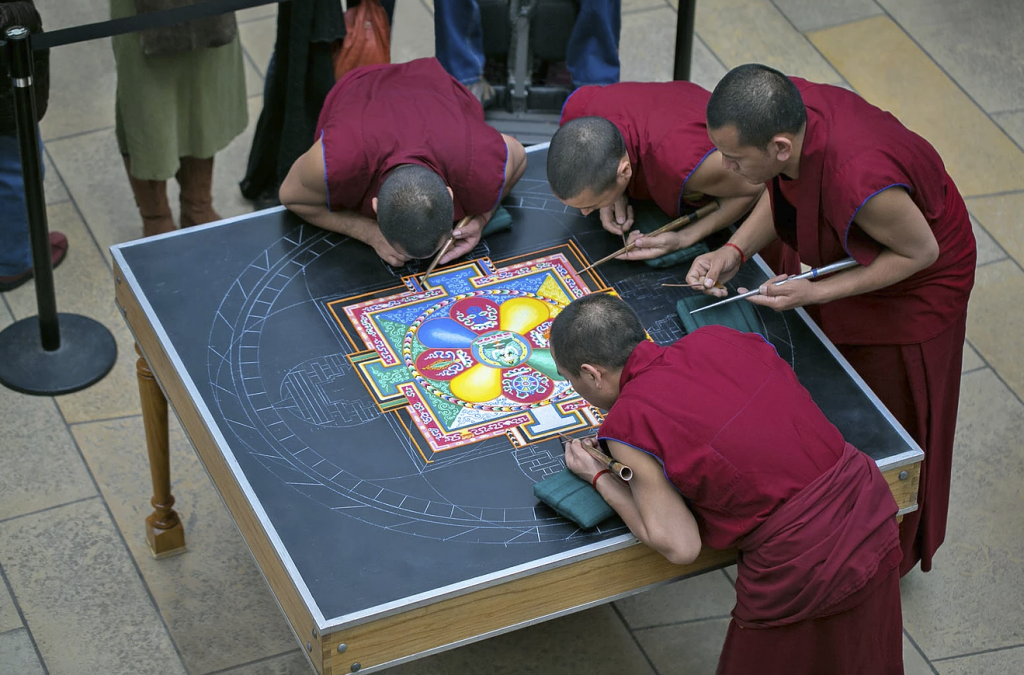 And now for something completely different.

Early Music Now will host monks from the Tibetan Drepung Loseling Monastery this Saturday at the Tripoli Shrine Center. The monks will offer dance and chants from 500 to 600 years ago, but much of the music, instruments and other traditions go back 2,500 years. The week begins with the ritual construction of a sand mandala.

Tibetan Buddhism represents one important branch of the Buddhist faith. In 1950, China annexed Tibet. In 1958, many clergy, including the Drepung Loseling Monastery, established exile locations in India. The Drepung Loseling Monastery was one of the largest, peaking at 10,000 monk students. The Dalai Lama, holy leader of Tibetan Buddhism, also established his headquarters in India. The diaspora that resulted increased the spread of Buddhist practice around the world, including in the United States.

The India -based monastery has affiliated with Emory University to create a North American center, The Emory-Tibet Partnership (ETP). The programs “explore the convergence of science and inner values in an effort to address humanity’s greatest problems on more than a material level.”

Since 1988, the Drepung Loseling monastery has offered the Mystical Arts of Tibet program around North America. Complex motivations guide this outreach. Endorsed by the Dalai Lama as a means of promoting world peace and healing through sacred performing art, the programs mix art, dance, music, faith, a bit of global politics and positive vibrations into a complete package.

The visit to Milwaukee involves a week of activities.

During the week, the monks will create a sand mandala in the rotunda of Milwaukee City Hall. The work begins with a ceremony on Tuesday, April 9 at 10:00 a.m. From then until Friday, the monks will work on creating the mandala. From 10:00 a.m. to 5:00 p.m. each day, the public can view the ceremonial construction (and ultimately deconstruction) of this intricate work of art.

Religious symbolism, cultural politics and art come together in the sand mandala A design will be chosen from one of many traditional designs. Each mandala design reflects a message. The construction and dismantling of this work is a potent symbol of the impermanence of things.

Yesse Phelgey, Administrative Director for the Mystical Arts of Tibet observes that “The building of the mandala is not just art. Through the ritual and the monks’ meditation, we receive the value of the blessings from Buddha’s teaching. … The work will be destroyed in a minute. Non-attachment is a very powerful lesson.” In an event at 5:00 p.m. on Friday, April 12, the sand will be ceremoniously swept away. Some will be shared with onlookers, the rest will be returned to the Milwaukee River. The river carries the blessings to the ocean — and then to every shore.

Spectacle aside, the creation of the mandala will be a unique event requiring precision and patience of the artists. See short and long excerpts that demonstrate the work better than a few words might.

To learn more about sand mandalas, see the group’s website.

The Early Music Now performance on Saturday starts with a reception at 3:30 p.m., then a concert at 5:00 p.m. The program will be offered at the Tripoli Shrine Center at 3000 W. Wisconsin Ave. Parking is available in the lot to the east of the building.

Watch for a second story later this week describing the Saturday concert in more detail.