It is my honor to help lead @TheNRRT as we counter the efforts of the far Left to try and gerrymander their way into permanent control of the Congress and state legislative bodies across the country.  Republicans win if we have fair maps!

My role is to counter Eric Holder’s efforts.  He, with he[sic] help of former President Obama, have raised some $200 million that they are using in court and on the campaign trail.  Their goal is to secure Nancy Pelosi’s control as Speaker for a decade or more.

Historically, the Left often pushed maps that divide communities of interest & dilute minority voting power as they gerrymander districts to gain more power.  The GOP must fight for fair maps. If we have fair maps along with quality candidates & engaged grassroots, we win!

A statement from Walker and the NRRT hits the same theme:

“Barack Obama and Eric Holder want to gerrymander Democrats into permanent control, so we are working to ensure that our side has the organization and resources to combat their efforts,” Walker said in a statement.

This looks very much like a case of “projection.” As defined by Wikipedia, projection occurs when “the human ego defends itself against unconscious impulses or qualities by denying their existence in themselves while attributing them to others.”

The Wisconsin gerrymander, which Walker signed into law, is one of the most aggressive gerrymanders ever, locking the Wisconsin legislature into Republican control for the past decade, even when Democrats win the majority. Barring some sort of extraordinary event, Democrats would need about 55 percent of the vote to win control of the state Assembly.

Like other gerrymanders this was accomplished by drawing district lines so that Democrats were concentrated in a small number of districts (called “packing”) which allowed many more districts with Republican majorities (“cracking”).

Like Walker, the NRRT is a strong defender of partisan gerrymanders–so long as the benefit goes to Republicans. This is illustrated by the amicus brief it submitted to the US Supreme Court defending the notorious partisan Republican gerrymander of the North Carolina congressional delegation.

In its brief, the NRRT asserts that “intentional cracking and packing does not cause a palpable injury at the level of the individual voter.” It goes on to assert that “cracking and packing, then, does not truly represent individual injury. Instead, it ultimately measures injury to a party that roughly coincides with the party’s failure to achieve statewide proportional representation.”

By bringing up proportional representation, the NRRT sets up a straw man that it can shoot down. Contrary to the NRRT, electoral fairness does not require proportionality, meaning that a party wins the same percentage of districts as its votes. Rather, fairness demands symmetry: under the present scheme, for instance, if Republicans win 54 percent of the statewide vote, they would stand to win 66 of the 99 Assembly districts. The Wisconsin redistricting plan would pass the symmetry test if reversing the vote would reverse the outcome: if Democrats winning 54 percent of the vote also led to 66 Assembly seats. But it wouldn’t. Democrats would be favored to win only 46 seats, less than half.

Interestingly, the NRRT was silent on the other gerrymander the Supreme Court considered the same day. Maryland Democrats had transformed a US House seat from majority Republican to majority Democrat. The Maryland Republican voters challenging that gerrymander got no aid from the NRRT.

The likely future role for the NRRT is defending pro-Republican gerrymanders before the courts and helping Republican governors and legislators gerrymander their legislatures and Congressional delegations following the 2020 census.

Is Eric Holder and his organization, the National Democratic Redistricting Committee, the mirror image of Walker and the NRRT, as Walker charges in his Tweets? When Walker claims that “Barack Obama and Eric Holder want to gerrymander Democrats into permanent control,” is Walker lying? The blunt truth is he is.

Rather than encouraging the establishment of even one Democratic gerrymander, Holder’s focus is on challenging Republican gerrymanders. The following map, taken from the NDRC’s website shows the states that Holder is targeting for 2019-2020. Each state has gerrymandered its Congressional delegation, its legislature, or both to favor Republicans. 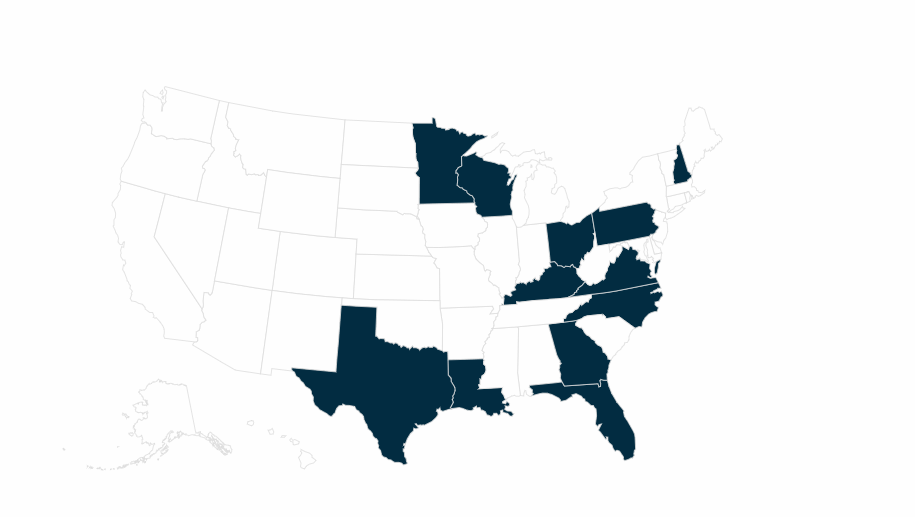 States that the National Democratic Redistricting Committee is targeting in 2019-2020,

Recently, New Jersey supplied a test of Walker’s claim that Holder was promoting Democratic gerrymanders. Its (Democratic) legislative leaders proposed to change the state constitution to enable Democrats to win 70 percent of legislative seats with just 57 percent of the statewide vote, according to one analysis of its impact. The proposal was dropped after wide-spread opposition, including from newly-elected Democratic Governor Phil Murphy and Holder.

And in Michigan, Holder’s group has pushed for non-partisan redistricting to prevent gerrymandering by either party.

Historically both Democrats and Republicans were prone to gerrymandering when they enjoyed a “trifecta,” controlling the governorship and both legislative chambers. The chart below shows estimates of the most gerrymandered state congressional delegations. As the chart shows, although both parties are guilty, recent gerrymanders are much more likely to reflect Republican control than Democratic. (Note that this chart doesn’t reflect recent action by the Pennsylvania supreme court to replace that state’s heavily gerrymandered congressional districts with a far more neutral plan.) 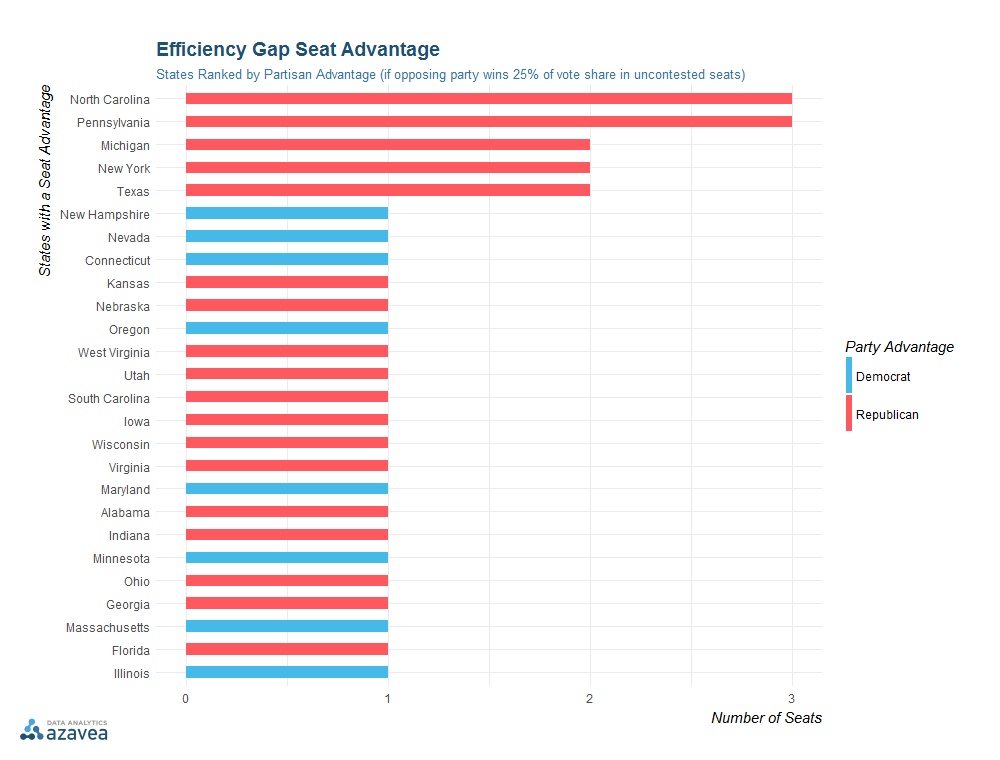 So, why did Walker lie about Holder’s strategy? One possibility, noted earlier, is psychological projection. He has closely allied with a master of projection, Donald Trump, well illustrated by this exchange from the 2016 presidential debates:

Trump: Look, Putin, from everything I see, has no respect for this person.

Clinton: Well, that’s because he’d rather have a puppet as president.

Another is that gerrymanders have gone out of fashion. The next graph shows voters’ response in January’s Marquette poll when asked whether they preferred redistricting to be done by the governor and legislature or by a nonpartisan commission. Even a strong majority of Republicans preferred the commission. 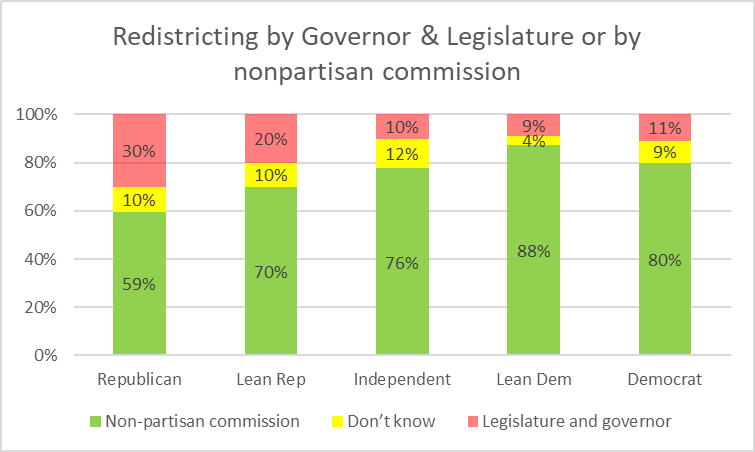 Redistricting by Governor & Legislature or by nonpartisan commission.

The recent controversies about gerrymandering have served to nationalize the issue. It is no longer tenable for a party to play it both ways: to decry gerrymanders that favor the other party while defending one’s own. The arguments against the Democratic gerrymander in Maryland are similar to those against the Republican gerrymanders in North Carolina and Wisconsin. This helps explain the NRRT’s silence about the Maryland gerrymander.

A recent Associated Press analysis concluded that gerrymandering allowed Republicans to win about 16 more U.S. House seats than would have been expected based on their average share of the vote in congressional districts across the country. If so, the Democrats’ margin in the US House would have almost doubled, from today’s 38 to 70.

Forced to choose, the Republican party has become the pro-gerrymandering party. This is not a comfortable place to be. Walker’s dissembling makes that clear.