The Rise of Brian Hagedorn

By Shawn Johnson, Wisconsin Public Radio - Mar 29th, 2019 10:28 am
Get a daily rundown of the top stories on Urban Milwaukee 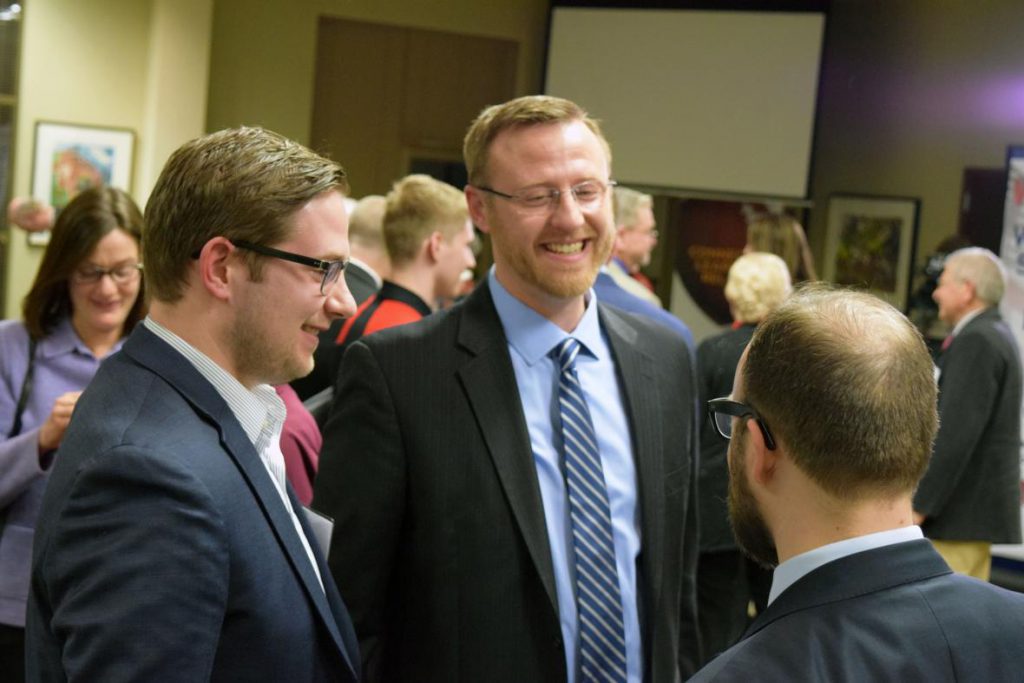 For about a decade, it seemed like Wisconsin conservatives couldn’t lose state supreme court races.

Their formula was well-established: Run candidates who are judges, rally a conservative coalition, and drive home messages that will turn out Republican voters in the officially non-partisan campaigns.

Wisconsin Court of Appeals Judge Brian Hagedorn, who is running for Wisconsin Supreme Court this year, checks some of those same boxes.

Hagedorn has been a judge for three years, and he talks about the law in a familiar way for conservatives.

“I believe my job as a judge is to say what the law is and not what the law should be,” Hagedorn said at a recent debate. “My job is to uphold the constitution as written.”

Hagedorn’s conservative credentials were established before he became a judge.

He clerked for former state Supreme Court Justice Michael Gableman, whose 2008 election established the conservative majority on the court that still exists today.

Republican Gov. Scott Walker also appointed Hagedorn to be his first chief legal counsel, a job he held for more than five years.

“I was a lawyer for the office of the governor, representing him for a legal capacity,” Hagedorn said. “I didn’t do politics, I did law. And I did law at a very high level for a long period of time.”

Hagedorn said he was involved in some of the most significant cases in state history. His tenure in the governor’s office saw major pillars of Walker’s agenda challenged and upheld in court, from Act 10 to voter ID.

Hagedorn also helped Walker shape Wisconsin’s judicial system. He oversaw all of the governor’s judicial picks, including Walker’s appointment of now-Justice Rebecca Bradley to the circuit court in 2012, and to the court of appeals in 2015.

According to Bradley, Hagedorn never asked her what she thought about specific laws or how she would decide specific cases.

“He and the governor were most interested in what my methodology would be in how I would decide cases,” Bradley said in an interview. “That impressed me very much.”

Hagedorn and fellow appeals court Judge Lisa Neubauer are both vying for the seat being vacated by retiring Justice Shirley Abrahamson, one of the court’s liberals.

A Hagedorn victory would expand the court’s conservative majority, but his judicial philosophy has been overshadowed in his 2019 campaign by his personal beliefs.

Hagedorn wrote blog posts in 2005 while a student at Northwestern Law School on a wide range of controversial issues, addressing one to an audience of “fellow Christians engaged in the culture wars with me.”

Hagedorn called Planned Parenthood a “wicked organization.” He criticized a court decision striking down a Texas anti-sodomy law, suggesting it could open the door to legalized bestiality. And he said that a candidate’s views on abortion were his “litmus test.”

Judge Neubauer, has seized on the writings, suggesting they show how Hagedorn will rule in cases before the court.

“The blog writings are extensive,” Neubauer said “They are not just about whether he likes green grass and nice sunsets. They are on key constitutional issues.”

Hagedorn said attacks on the school are an attack on his Christian faith.

“The policies they have are not aimed at people, they’re aimed at conduct,” Hagedorn said. “And they’re similar to what you’d find in Christian schools, Catholic schools, Lutheran schools, other schools of faith all around the state.”

Hagedorn said his religious views have never influenced his work on the bench and argues that Neubauer’s criticisms are more telling.

“The only time people raise those issues is because they think that’s what matters when you’re judging,” Hagedorn said. “Somebody who is running on personal and religious views is running because they have a bias. And that’s what we’re seeing out of Judge Neubauer.”

Not everyone sees it that way.

Former Supreme Court Justice Janine Geske said it’s unusual to have so much information about a judicial candidate’s views, especially when it comes to the intersection of religion and law.

“He and his campaign have been anchored by his writing of the blog,” Geske said. “I think people are very nervous about judges and justices who are going to overmix the issue of religious beliefs and judicial decisions.”

Splinters In The Conservative Coalition

Hagedorn and Neubauer avoided a primary because they were the only two candidates running for supreme court, but there were signs early on that some Republicans were uneasy about his campaign.

“There was a last-minute effort to find another candidate to get into that race at the end of December,” McCoshen said.  “I’m concerned about that race moving forward. Republicans are going to have to rally the troops in order to win that in April.”

Shortly after news of Hagedorn’s involvement with Augustine Academy and his blog became public, his conservative coalition began to splinter.

The Wisconsin Realtors Association, which has endorsed Bradley and other winning conservatives over the past decade, pulled their endorsement of Hagedorn in February. Other members of the business lobby – normally a major spender in Supreme Court races – have stayed out of his race.

Justice Rebecca Bradley, who has endorsed Hagedorn, said she can’t understand why someone would support her campaign in 2016 but not support Hagedorn.

“I really don’t understand it because if people pay close attention to what I said on the campaign trail and what Judge Hagedorn has said on the campaign trail, if they look at the kinds of decisions that I’ve written and the kind of decisions that Judge Hagedorn has written, they’re going to see that they’re going to get the same type of justice – somebody who follows the law, regardless of outcome,” Bradley said.

Bradley also came under scrutiny in her race for writing op-eds in college that criticized gay people, but she apologized for the comments and said her views had since changed.

Hagedorn has not apologized for anything he wrote in his blog, but Bradley said he doesn’t need to.

“I respect that Judge Hagedorn has strong personal, Christian religious beliefs,” Bradley said. “I don’t think he should apologize for anything.”

Hagedorn’s beliefs may have hurt his chances with some groups, but he got a financial boost this week from another.

The Republican State Leadership Coalition announced a major ad buy on his behalf, urging conservatives who support President Trump to vote for Hagedorn on Tuesday.