Spoiler alert: now is much better. John Sieger’s new album is a stunner. 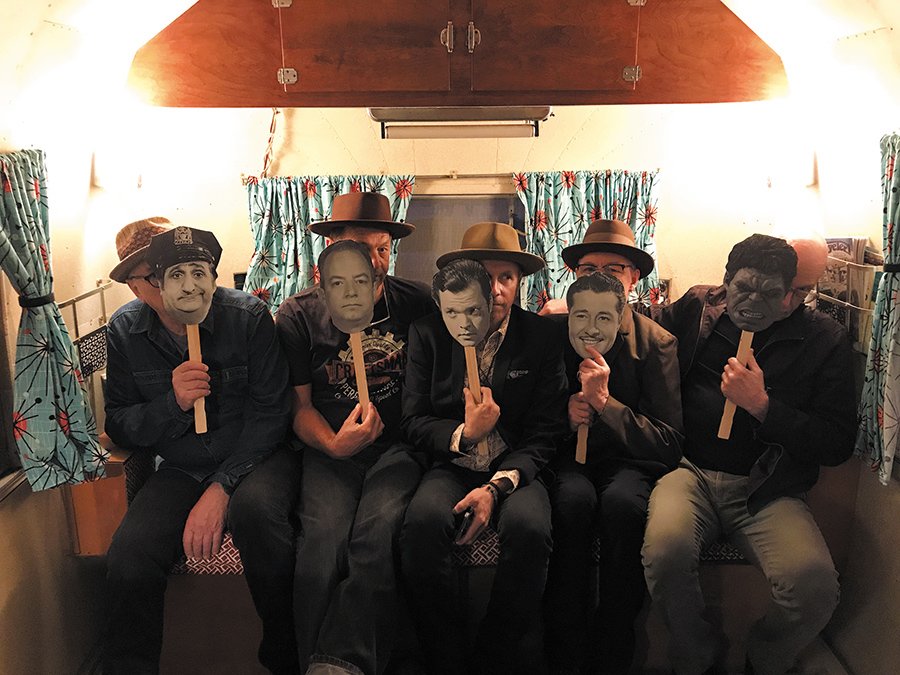 In the mid-eighties, singer-songwriter John Sieger’s part-time band outside the wildly popular R&B Cadets attracted major record label attention. Lured by a $175,000 advance from Warner Bros. Records, Sieger and most of his bandmates abandoned the Cadets (just before their first album had been released) for the big-time promise of Semi-Twang. Following recording dates in Los Angeles with influential producers and a plush jaunt to New York to shoot a first music video, Salty Tears was released in March, 1988.

In the bloodless parlance of the entertainment industry: Units did not move. A tour in support of an album not enough people were buying was dropped, and MTV – a kingmaker in those days – never played the music video for the title track.

Just like that, Semi-Twang was fully done. And I missed it all.

I grew up in Beloit, but had never been to Milwaukee until my wife and I moved here from Southern California in 1994. In 1988, when presumably all eyes were on the latest Milwaukee band on the cusp of the big time, I was in L.A. and years into a quest for a screenwriting career. This would ultimately mirror Semi-Twang’s trajectory somewhat for its dream-come-true beginning and its sputtering end.

Since the launch of Semi-Twang 2.0 in 2009 and the 2011 release of its second album Wages of Sin – a mere 23 years after the first – I have had the pleasure of seeing the band perform many times around town. But I had never heard Salty Tears, the disk that might have been.

Which provides me a unique opportunity to assess the full arc of the band’s musical legacy on the occasion of the release of its new album, Kenosha. What was it that allowed these once-young men a flirtation with the major leagues, and how have they – and their music – evolved?

To these 2019 ears — somewhat impaired by my 1970s Kiss albums — 1988’s Salty Tears sounds like a band and a record label not sure what they’re doing with the other. The marketplace of the day offered no guidance to either.

The Billboard charts in the first half of 1988 were dominated by George Michael, Tiffany and the Dirty Dancing soundtrack. The second half saw hard rock icons Van Halen, Def Leppard and Bon Jovi still flourishing. These were inauthentic times for a new band for whom authenticity may have been their only credential.

The so-called cowpunk movement, which in the mid-eighties had seen critical fawning and modest commercial success for countrified, MTV-disdaining indie bands like Rank and File, the Long Ryders, the Beat Farmers, and Jason & the Scorchers, may account for Warner Bros. signing Semi-Twang in 1986. But when their album was released just two years later, cowpunk was kaput.

Alt-country, which is generally thought to have become a thing with the release of the first Uncle Tupelo record in 1990, was yet to be. Semi-Twang suffered the bad timing of arriving in the void between the two pigeon-holing categories that might have sustained them.

Still, a strong disk of Americana might have broken through — John Mellencamp was at his pinnacle in 1988 — but Salty Tears falls short of that mark. The album sounds like a band — and a bandleader — who got their big break too soon.

Semi-Twang had only played its first gig in 1985 – an opening slot for Emmylou Harris in Madison (“Before we were really a band,” Sieger told the Chicago Tribune) provided by a local industry connection. Harris was impressed, she talked to her people at Warner Bros., and by summer 1986 a contract was signed. The band was sent pretty quickly into recording studios far from home in L.A.

Unlike many first albums, in which a new band explodes (and often peaks) with a debut set of songs that have been club-tested for years, the material on Salty Tears sounds… thin. Sieger’s songwriting has little of the sly humor and world-weariness that would come with age. The band — then as now comprised of John’s brother Mike (bass), Mike Hoffmann (guitars), Bob Schneider (drums) and Bob Jennings (keyboards and horns) – fails to prove itself as a unit with an identity in its own right.

Weakest is Sieger’s voice, which as a young man had not yet acquired much character. He had spent the six years prior to Semi-Twang in the R&B Cadets, the band he founded, as just one of three singers, the other two being the wildly charismatic Paul Cebar and Robin Pluer. Suddenly front and center as the sole voice singing all his own songs, Sieger ‘s voice is nondescript, even tentative. The record had three producers (never a good sign), and some did a better job than others using studio techniques to address the shortcomings in his vocals.

But as a complete piece of work, I think Salty Tears was just the sort of missed opportunity that you’d expect given the circumstances in which it came to be. (After I had arrived at my assessment of the album, a friend who would know told me that the Salty Tears demos were outstanding. While “It was the producer’s fault!” is the bitter declaration of all one-and-done bands, perhaps the world really did miss out on a stellar bunch of songs that were poorly-served by others.)

Regardless, 31 years later it’s on to Kenosha. Pack a bag; you’re going to want to spend some time there.

It doesn’t need saying that three decades of life experience – the good and the bad, the sweet notes and the botched chords – can bring an awful lot of hard-won richness to a man’s art. Sieger spent six years (1993-1999) in Nashville writing songs for a number of artists, but then came back to Milwaukee. He and his Twang mates have all kicked around Milwaukee for most of the time since their brush with fame and fortune so long ago, staying close to the music scene, playing alone or in various combinations in a wide range of bands and musical projects, and coming to deservedly be seen as wizened souls with tales and tunes stretching back to the roots of rock and roll.

The fact that the same five guys still come together to produce new music, purely for creative satisfaction now that they long ago aged out of another shot at the Star Making Machine, is a poignant tribute to the inescapable lure of being in a band. If there remains some wounded pride about their high-profile career collapse and the modest local stages they have been consigned to since, pride can be a magnificent motivator for artists determined to prove they’ve still got it.

And they sure do: Whatever the particular alchemy, Kenosha is career-best Semi-Twang. An alternately jaunty and winsome nod to John and Mike Sieger’s hometown (that’s them on the cover, sometime in the mid-sixties and already rocking), the album is rich and diverse and just damned fun in a way that probably has to be earned over a lifetime. “Things Are Going South” and “Yes I Will” rock with a swampy swagger, while the aching “Short Order Girl” and “Tall Tall Grass” are dense with atmosphere.

As a songwriter, one can assume that Sieger would not reject the assumption that Tom Petty and Johnny Cash are wired deeply into his DNA (“I Broke the First Commandment” might be dismissed as too-obvious mimicry of the Man in Black if the song weren’t so devastatingly true to Cash’s late-career laments for his sinner’s soul). Vocally, this new album brings to mind no one so much as Warren Zevon, particularly The Wind, sung in the frail, regretful and occasionally still spry voice of a man literally dying before the microphone. Yet Sieger’s voice captures the same rough, soul-weary honesty, a tribute to his stylistic talent.

The band – the whole damned five of them – are a joy. Self-produced by Semi-Twang along with Chris Hanson in his local studio, Kenosha has a warmth and organic richness that highlights each member’s strengths. The MVP has to be the venerable Bob Jennings, who arranged and played all the horn parts ranging from the layered, E Street-like soul of “My Mind is Weak” to the Tex Mex bounce of “Time Zone,” while also coloring the whole record with wonderful keyboard work.

And weaving all the tracks together into one cohesive work are entirely charming harmony vocals contributed by all five players. Sometimes with the lilting sound of the Jordanaires, but also with raucous, youthful shouts of “Hey!” to punctuate the anthemic title track, these are voices that not surprisingly layer one atop the other beautifully after entire adulthoods spent together on stages and in studios. In recent interviews, Sieger has acknowledged that he has not always been an easy bandleader to hang with and is doing better by them. Maybe what we’re hearing in those harmonies is a genuine comradery that has not always been there.

In a fair universe, artists would find audience acclaim and financial reward only after a lifetime of learning their craft, honoring and building upon the legacy of their influences, sometimes doing really bad work with all the best intentions, and simply outlasting all those who wanted the glory without putting in the time and hard work that all of this entails.

But it doesn’t work like that. So, instead, if all that hard work and marketplace indifference never succeeds in wearing you down, you still tune up, plug in, and play your best for the audience that will have you.

After 33 years, that’s what Semi-Twang does. And here in the 21st century, they are doing it very well.

The Kenosha album can be purchased through iTunes or you can get both digital versions or an actual physical copy of the album at CD Baby.

Writer Tom Matthews wrote the Costa-Gavras film Mad City, starring Dustin Hoffman and John Travolta and the novels Like We Care (2004) and Raising the Dad (2017), as well as award-award-winning feature stories for Milwaukee Magazine.