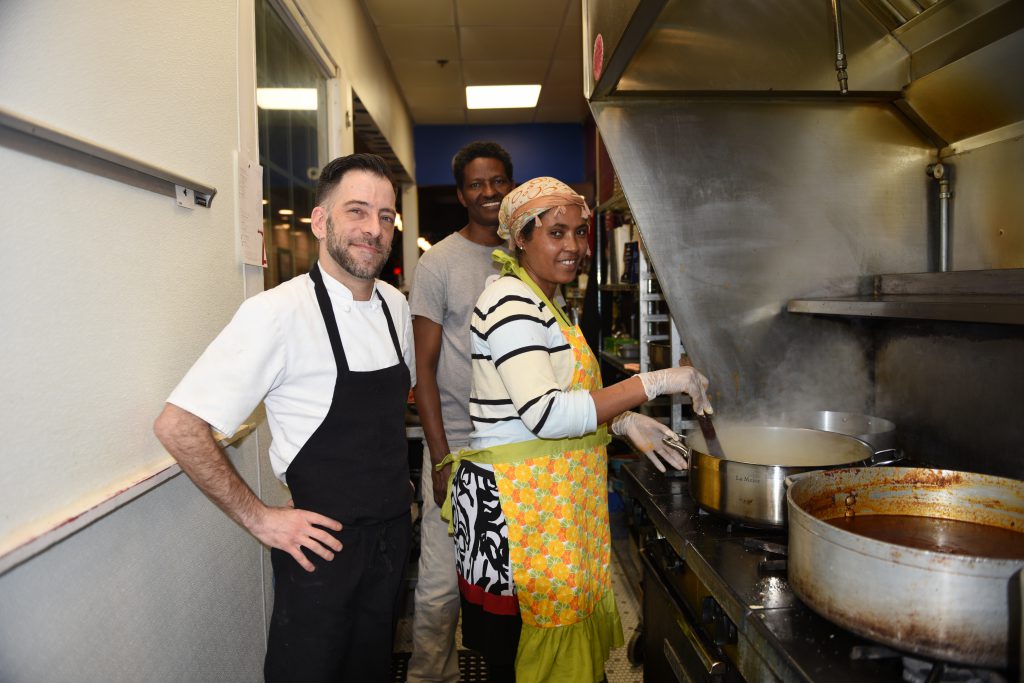 Greg Leon, the owner and chef of Amilinda, Abebech Jima, a refugee from Ethiopia prepare the meal. Photo by Sue Vliet/NNS.

Abebech Jima and her family came to Milwaukee from Ethiopia three years ago looking for a chance to start over.

Like many refugees seeking asylum, the family wanted to live somewhere safe and away from the life-threatening conflict tearing their country apart.

Eventually Jima and her husband, Zerihun Tadesse, connected with Kai Gardner-Mishlove, who would pick refugees up at the airport, show them their apartment and help them adjust to life in Milwaukee.

The newcomers would repay Gardner-Mishlove with food, a symbol of their gratitude. The meals she ate in their homes tasted better than any food she had ever eaten in a restaurant. So after experiencing many flavors, spices and dishes, Gardner-Mishlove realized that other people deserved to get a taste, too.

And Tables Across Borders was created.

“People don’t realize how diverse the refugee community is in Milwaukee,” she said. “Each culture has the soul food of that cuisine.”

Gardner-Mishlove eventually joined forces with Saehee Chang, whose mother was a refugee from North Korea and has connections in Milwaukee’s food network.

Together, they formulated a plan to hold six dinners with meals prepared by refugee chefs who identified as Ethiopian, Rohyinga, Congolese, Syrian, Karen and Serbian.

When word got out, all dinners, priced at $60 each, were sold out.

Tables Across Borders hopes to continue showcasing refugee chefs. In the future, it plans to partner with additional restaurants that wish to host a pop-up dinner.

Jima, who prepared the meal for the first Tables Across Borders event, said through food, people feel encouraged to share and forge connections.

“Food is the best way to communicate your idea or your problem,” she said.