The Ageless Power of John Fogerty

Still rocking at age 73, he had the crowd at the Riverside singing along 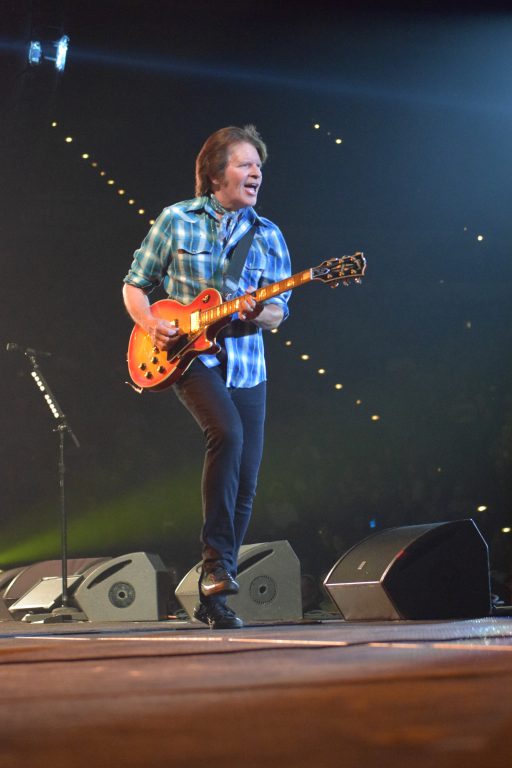 Last night’s John Fogerty performance before a packed house at the Riverside Theater started off with the high energy tune “Travelin’ Band” and never relented. At age 73, Fogerty’s voice and guitar playing commands your attention like a freight train rumbling (ever so musically) through your living room. Fogerty is touring in 2019 to celebrate 50 years in music and performed a waterfall of hits including “Green River”, “Run Through The Jungle”, “Heard It Through The Grapevine”, and “Born On The Bayou.” Using a large video screen to project images of Woodstock, the 60’s, his old band Creedence Clearwater Revival, a neon jungle and Fogerty home movies added visual stimulation that directly related to the storytelling aspects of his music.

In the middle of his set Fogerty took time to introduce his young, five-piece bandmates including son Shane Fogerty on co-lead and rhythm guitar. Each of the musicians including sax player, keyboardist, bassist, and drummer, took their turn to wow the audience with their musical virtuosity. Fogerty told stories about performing at Woodstock in 1969, opening for the Grateful Dead at 2:00 a.m., and the Rickenbacker guitar he used at Woodstock, lost for so long and found many years later by his wife Julie to reunite her guitar man and his long lost axe!

Fogerty seemed at ease and a man who has excised the demons of years in rock’n’roll and the epic legal battles of his former band CCR. Midway through the set Fogerty featured his swamp blues version of “Heard It Through The Grapevine”, the soulful “As Long As I Can See The Light”, the country-tinged “Have You Ever Seen The Rain” (written about the Woodstock experience), the nostalgic “Centerfield” (where he plays his famous Louisville Slugger guitar) and the groovin’ “Down On The Corner.”

Thereafter, it was take no prisoners as Fogerty kicked it up a notch with “Old Man Down The Road” where father and son traded licks on their matching black Les Paul guitars. Our hometown hero the late Les Paul (Fogerty has been a supporter of the Les Paul museum) must have been smiling down from the heavens, witness to the fact Fogerty taught his son a few things about squeezing the juice out of every note. “Fortunate Son” completed the set in just under two hours and the crowd was on its feet and dancing in the aisles. After a rousing standing ovation Fogerty finished the night with “Bad Moon Rising” and “Proud Mary,” two of his most notable songs with the crowd singing along word for word.

John Fogerty proved why he’s an American musical icon and Rock & Roll Hall Of Fame inductee. Like an old prizefighter he’s still swinging hard and looking to deliver a knockout punch, and he certainly did last night.