Why is MPS Shrinking?

Because it opposes the choices of many of its customers. 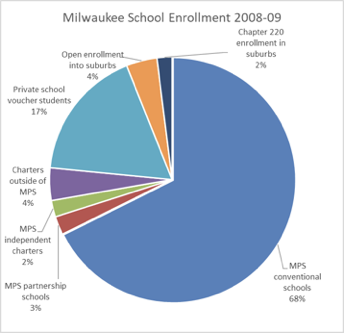 For more than a decade, enrollment has been shrinking in Milwaukee Public Schools. The pie chart below, using data from Marquette’s Alan Borsuk, shows the mix of students in Milwaukee schools during the 2008-09 school year.

Here is a list of the various K-12 education sectors in Milwaukee:

During the past decade, the pool of Milwaukee students has remained pretty flat (growing from 115,522 to 118,460). However, as the next pie chart shows, some sectors have grown while others–have shrunk. The big gainers have been independent charters, rising from 6 percent to 14 percent of the pie, and voucher schools, increasing from 17 percent to 24 percent. 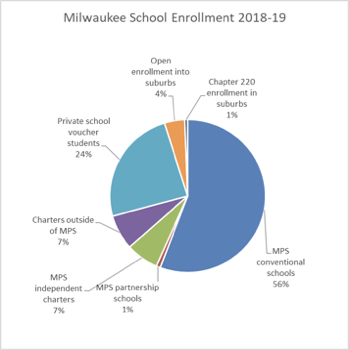 In pure numbers, the biggest enrollment decline has come in the MPS conventional schools. Although they still account for over half of Milwaukee enrollment, they lost about 12,000 students over the last decade, while the charter and choice segments each gained about 9,000 students.

The graph below shows both enrollment and the number of schools participating in the Milwaukee Parental Choice program since its start. 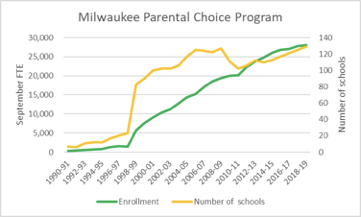 Shrinking enrollment at MPS creates nasty problems. For unions, it means fewer members and less revenue from dues. For the administration and school board, it creates a need to bring its facilities in line with a smaller enrollment. If doing so requires closing schools, one suddenly discovers that even the most unsuccessful school has its cadre of devoted supporters.

Closing schools brings its own set of problems. What should be done with the empty school building? The most obvious use is another school, most likely a charter school or a private school. Also, If teachers in a closed school have bumping rights, other schools may have to employ them, causing disruption each time a union school closes.

Organizations losing market share have a choice of two strategies. They can try to understand the reasons that customers are defecting. Or they can try to change public policy to outlaw or otherwise restrict their competitors. The trouble with the second strategy is that it puts the organization at odds with the interests of its customers.

Republican politicians love to talk about “job creators,” when referring to private sector employers. The advantage of this metaphor is that it disguises policies aimed at creating more economic inequality by, for instance, giving a tax break to Wisconsin manufacturers. Job creation polls far more positively as a goal than upward redistribution of income.

The danger of this language is that it encourages businesses to place the emphasis on their own welfare, rather than the true job creators, their customers. Bad things often happen to the organization that puts the organizational interest ahead of that of its customers.

Still, it is easy to come up with examples of acting against the interests of the customers. These include the successful effort by representatives of the financial industry to beat back the Obama-era fiduciary rule that would have required advisors to act in the best interest of their customers. Or Wells Fargo’s incentive system that pushed company employees to create accounts without customer authorization.

For the past two decades, there has been an influential faction, including the Milwaukee teachers’ union (MTEA) and some school board members, that blames MPS’s problems on the availability of charter schools and vouchers for private schools. According to the MTEA and its close ally the Working Families Party, the solution to declining MPS enrollment is to prevent parents from choosing to send their children to charter schools or private schools.

Thus, instead of asking how MPS can better serve its customers, the children and their parents living in Milwaukee, the emphasis is on recreating a monopoly by getting rid of the competition. Ironically, charter schools chartered by MPS are among the most successful, if the state’s school report cards are used as a measure. This is particularly true if one looks at schools with a high percentage of students in poverty.

Partly this reflects the MPS competitive advantage, its ability to offer its empty space to a charter school. However, growing hostility towards charters on the board has made charter school administrators begin to wonder if they should consider switching to another charter authorizer.

Consider what happened to Wendell Harris, the only incumbent running for reelection in April election for school board. Four years ago, Harris ran and won with the support of the MTEA. This year the union is opposing his re-election. His crime? After visiting Carmen and deciding it was a very good school, he voted in favor of its sharing space in Pulaski High School. Essentially, his crime was putting the interest of the students ahead of that of MPS.

The next table lists the candidates for school board in the upcoming election. I think it is safe to say that those in the left-hand column have convinced the MTEA and the Working Families Party that they won’t make Harris’ heresy of approving a charter school application just because it does a good job of educating students.

To put this in perspective, conventional MPS schools currently serve around 56 percent of the Milwaukee children whose education is publicly supported, while 39 percent are in independent charter schools or private schools through the choice program. In order to get the Working Families/MTEA endorsement, the candidates in the left-hand column are committed to trying to disrupt the education of 39 percent of Milwaukee’s students.

One thought on “Data Wonk: Why is MPS Shrinking?”