‘Buster Scruggs’ Is Not To Be Missed 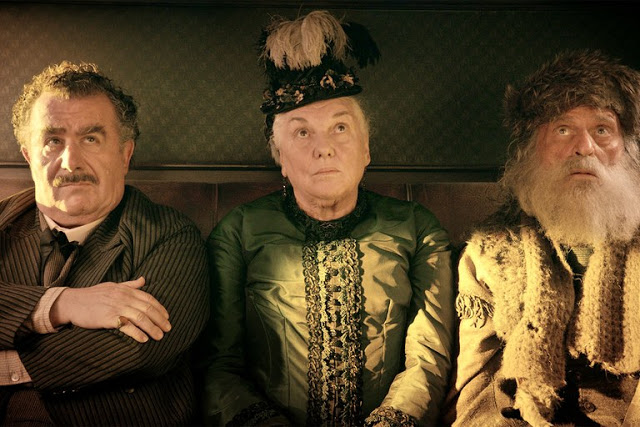 The brothers Joel and Ethan Coen often create stunning hard-to-categorize movies (where would you put Fargo and The Big Lebowski?). Sometimes they even stay within a genre, which they love to pretend to do, but provide the Coen twists (No Country for Old Men, True Grit). Sometimes they come a cropper (that for me was O Brother Where Art Thou? and Hail Caesar).

But often a Coen film is a gigantic uncategorizable pleasure. The brothers are, despite their growing fame, eccentric (or maybe that’s part of the fame). Some of their films escape reviewer notice and audience attention because they are so difficult to explain and so hard to build word of mouth around — until the film reaches cult status.

Such I think is The Ballad of Buster Scruggs, an exceptional film, both creepy and sad, that should be on most best of 2018 lists. Yet most people have not heard of it unless they are devoted to Netflix and the Coen brothers, sometimes regarded as a two-headed director.

Ballad collects in six different styles six Western tales that hint weirdly of many standard Western genres, from the singing cowboy to the wagon train romance to the lonely prospector to the medicine show to the stagecoach ride toward doom, each weirdly unfolding as either a surreal adventure or what we expect to resolve as a profoundly natural excursion. The cinematography by Bruno Delbonnel is extraordinary, warm, luxurious and dark when needed. Other production values are exemplary. The pacing and even the cutting are of a piece, but shift style and intention in each tale. Some are very short, some are extensive in either dialog or events.

This sort of omnibus film, a collection of stories connected as if from a book, was commonplace in the 1950s and ‘60s with O. Henry short stories and the like, but it has almost disappeared today, replaced by four to six episode TV shows. In the Coens’ hands, it is definitely a movie in breadth and it requires an impish knowledge of a range of movie westerns, once America’s most popular movie form. This encompasses not only the classic ones but the B movie ones that filled the bottom of the bill in the 1940s or dominated television in 1950s series, winding through the modern variations.

The Old West, this film reminds us, was a cinematic minefield — a playfield of the battle between good and evil, mortality and morality, desert and sky, of shadings in between with different directors bringing different energies and purposes. There are historic lessons from such classicists as John Ford and Anthony Mann and modernist tics from Sam Raimi – and a squad of clichés from all the horse operas of the past. Many are borrowed from but the Coens have overlayed the genre with cruel and sad laughter – a style of attack uniquely theirs.

There are many noted actors in the cast, most bathing in invisibility behind costumes, makeup or manners different than the ones they are known for. Others, such as Tyne Daly, are used for the power they give to conversations. Some of the more notable are Tom Waits (yes also a song legend), Liam Neeson, Harry Melling as a Shakespearean actor you will never forget and Zoe Kazan as a touching mail order bride on the trail.

The stories are such that a reviewer shouldn’t give away the endings, but each one lands a different kind of punch, some leaving us staring at the darkest side of life, others offering a comic outreach to heaven.

The only downside of watching this on Netflix (only place it is available) rather than in theaters is I wanted to see if others were racked by the same reactions, carried away in the same places I was. Sometimes that’s the price of solo viewing and sometimes it’s the joy of solitary freedom.

But I wonder if that is also a price the film is paying this awards season. It’s not even a favorite in the two Oscar categories where it got nominated for the Feb. 24 ceremony, for best song and the Coens for best adapted screenplay.