‘Bohemian Rhapsody’ Is a Sonic Spectacle 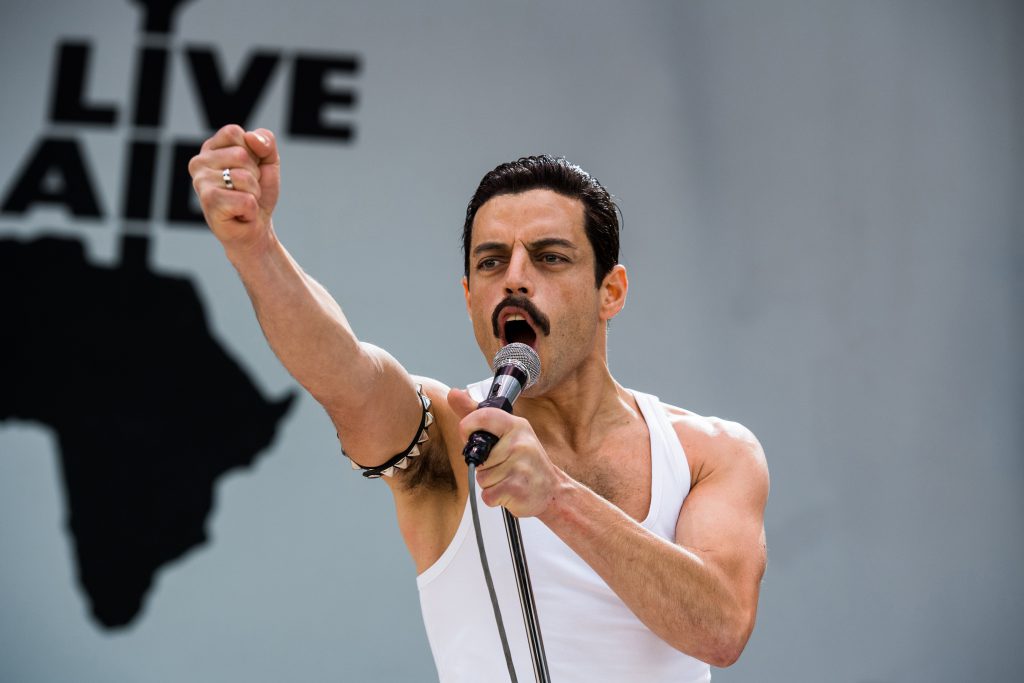 To students of rock ‘n’ roll, the title Bohemian Rhapsody immediately signaled a story about the 1980s greatest crowd-rousing rockers Queen and the incredible vocal ability of lead singer Freddie Mercury. To other moviegoers it probably sounded like a bio of some classical musician, maybe Brahms.

But not anymore, now that Bohemian Rhapsody has climbed not only the heights of the movie box office but also the awards ladder. This is also a movie where you want to catch the credits. The famous opening 20th Century Fox fanfare is played as if Queen had hijacked the studio orchestra and the closing credits give you the real Freddie Mercury in concert to compare how smartly the movie has matched the people and times.

It is also up for best movie in the Oscar race, a tribute to how professionally it has been handled and polished, even if exaggerating the historical connection between that Freddie performance at the Live Aid concert in 1985 and his AIDS related death six years later. But all movie bios of celebrities play with events and mainly Bohemian Rhapsody plays purposefully in emphasizing the private life and public persona of Freddie (birth name Farrokh Bulsara).

It carries viewers from long-haired in-your-face mocking club strut at the start of his career to the flamboyant, mustached master of virile stage antics at mammoth auditoriums, even as his private life became more bisexual and dangerous.

Rami Malek gives the performance of the year, seamlessly adopting Freddie’s movements and excesses without condescension or comment, exploring his impulsive private demons and flights from responsibility.

A certain zealous adulation is involved in any such biopic. Here it paints Queen as the greatest rock band of all times. Well, certainly they had the most fantastic lead singer and the movie will bring a needed re-evaluation of just how high in the annals of rock Queen should be placed. Its anthems seeking crowd participation, its long lyrical phrasings have endured over time, but so has some pedestrian output as the band itself cheerfully admits and the movie even jokes about.

The movie can’t resist making a major romantic subplot about the wonderful girl that Mercury’s flings with men cost him. The film’s Mary, played with vivid knowing looks by Lucy Boynton, was often called by Mercury his best friend and even wife. Her direct warmth is countered by Allen Leech’s portrayal of an attractive slimeball, Paul, the manager who helps lead Mercury into moral ruin (again a bit of playing with historical events).

The film has attractive expert cinematic elements under director Bryan Singer, famous for the X-men franchise but, more notoriously, for accusations of sexual misconduct that he vehemently denies.  Nevertheless, that offscreen controversy has influenced attitudes about the movie and its awards likelihood.

But the technical expertise deserves recognition, including fast and pertinent editing by John Ottman. The makeup and casting physically duplicate the famous onstage and backstage teams of musicians and even more amazing is the camera magic that re-creates the enormous crowd and emotion at the Live Aid concert.

Malek has the square jaw and large eyes to convey the Freddie of legend, but it is his acting that makes the central driving story work. His sync is masterful through false teeth that mimic the profound overbite that Freddie credited for his vocal technique and endurance (though I know many a music teacher who would say this was not the central factor given his smooth three-octave range).

For degree of difficulty Malek wins the Oscar hands down. But it will not be that simple, given how well Bradley Cooper directs himself in A Star Is Born and given that Christian Bale could share (but isn’t required to) co-credit with his Dick Cheney makeup artists should he win for Vice. Also in the race is a Wisconsin native for a film most people haven’t seen: Willem Dafoe as Vincent Van Gogh in At Eternity’s Gate, a film already on DVD release and at Amazon.

But there is a strong dark horse in the race who was passed up last year for Captain Fantastic – Viggo Mortensen, delightfully a New York wise guy in Green Book.