A watershed for black inclusion that’s grossed $1.4 billion — but not a great film. 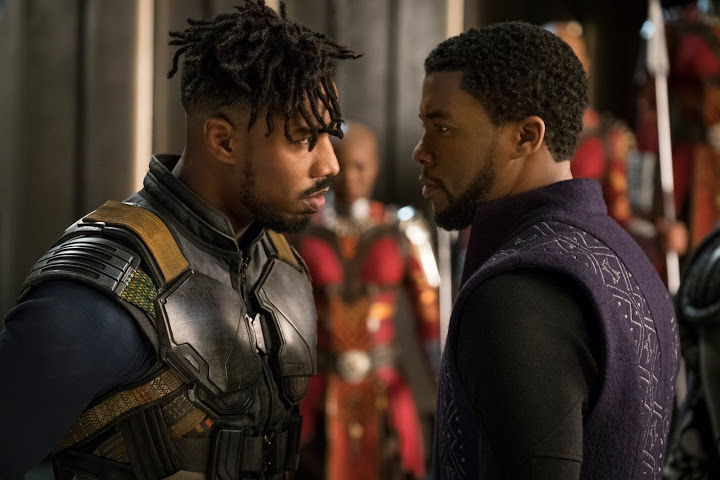 Black Panther was released to US theaters exactly a year ago and it is still hanging on (or picked up) at area theaters. A film that cost $200 million made that back its opening weekend in February of 2018 and has gone on to gross $1.4 billion (!) worldwide.

It is the first Marvel Comics movie to be nominated among eight for the best picture Oscar, which is not tied to how well it was made but to how much media attention it has gotten. Yet it has been praised as an important step forward in African Futurism since it has elevated all its nations in the world’s awareness and borrowed from several of the continent’s cultures and languages.

It’s sort of a master stroke of benevolence for Africa’s self-image (or to fix Trump’s image of the continent’s backwardness and poverty, a view many refuse to buy into). Its worldwide box office reminds the US that what is a minority culture view in this country sure ain’t the same internationally.

Some of the attention is a godsend for Oscar, which decided this year not to have a solo host, not after comedian Kevin Hart ran afoul of sexual behavior reports. Among the rumors of replacing ideas was having the cast of the Marvel Avengers series play bigger roles – a fruitful tie-in for an enormous franchise including Black Panther. Look for cast members Chadwick Boseman, Lupita Nyong’o and Danai Gurira to at least have roles as presenters.

To many in the cast, just being on the awards lists is a rare honor. The thought of it winning best picture I admit fills me with dread.

For the black community it invented an entirely different culture using the Marvel model. It employed thousands of roto, paint, matte and other specialists on several continents, involving several studios and shops. It is a mammoth example of what the movie industry can muster in the era of cgi and digital effects. It is both a sad and wondrous example of what Steven Spielberg launched more than a quarter century ago with Jurassic Park, the first blockbuster to elevate this technological computer world into studio dominance. An entire generation has been raised on this sort of film, making traditional cinematic storytelling look a bit old-fashioned.

If the Oscars are about honoring the brutal kinetic power that studios can bring to bear on the screen, this is probably the best example. If the ability to look inside our behavior and values is what movies should value most, that is more of an artistic standard, which I prefer. Black Panther, despite all the hoopla, is not about that except in its side elements.

For many in the black community, though, it has had the positive impact of dam bursting. All those years of Tarzan movies defaming the African culture, all those years of only stereotype roles for black actors – either super good like Poitier or relegated to the alleys — have fallen away with Black Panther, or such is the hope. Maybe finally, the lives of so-called ethnic minorities can drive the movie business as they rule the music and television business, as seems to have become partly true in the last few months.

One thing is sure. From an economic as well as a storytelling viewpoint, black artisans should never be ignored again. That would be quite an accomplishment on its own. But let’s not pretend the movie is something it isn’t.

Special effects, flashy explosions, rapid battlefield cuts, magical spears, martial arts wizardry, mechanical rhinos (horses restructured on computers), smart talking women, elaborate manufactured ceremonies based on African cultures, costumes flowing on or off the bodies — are all mashed together in a typical Marvel plot. The power of acting some have praised is really the power of personality, how capably under the makeup the actors are moving within these strictures.

This is movie acting in the modern era, but how much Michael Jordan’s hair-do and body scars from the makeup crew have to do with his impact as Killmonger – that’s hard to figure, even for the actor. We do know that some strong actors, Forest Whitaker and Angela Bassett, barely survive their costumes, though the costumes may well be the movie’s most artistic element.

It’s a thrill ride adding pride and proof of economic clout to black audiences. But in many ways, black culture has been painted over with a winning Marvel Comics formula. A year since it was released, we should at least realize there is a limit to how much pleasure society can take from that.