She’s so omnipresent maybe they could hire justice Ginsburg as Oscar host. 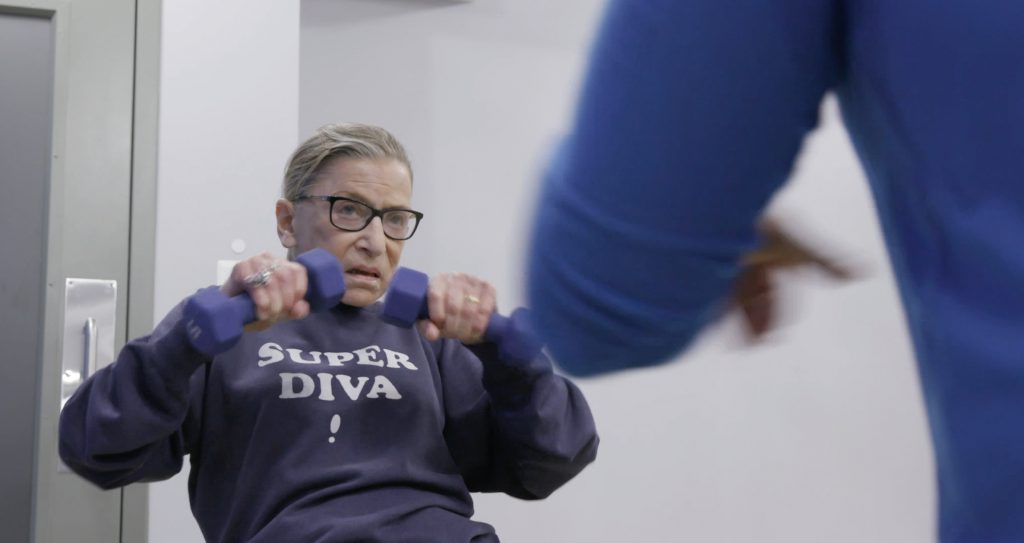 Having failed to find and keep a host for this year’s Oscars, the Academy should have turned around and offered the job to Supreme Court Justice Ruth Bader Ginsburg. One way or the other she is all over the movie industry at age 85. Maybe more involvement by her would keep the Academy from shooting itself in the foot.

The Notorious RBG as she has become known is a more popular coffee mug and T-shirt icon for the nation than movies. Her liberal dissents add mightily to the legend she established as a young lawyer in promoting equal rights for men and women. It’s hard to think of anyone else who would get such a standing ovation from the Hollywood crowd.

Her petite, seemingly frail and partly stooped posture behind enormous glasses has become one of the most famous images in modern times, so much that few realize she was a lively young lawyer with a tall funny husband who were such attractive opposite – he full of humor, she a serious brain – that not only clients but fellow lawyers flocked to them. Today her fierce exercise routine makes headlines and her health has a nation of supporters openly pleading for her to not die. The Internet even briefly thought she was dead last November when she underwent surgery on her left lung to remove malignant nodules – her third bout with cancer yet she’s back at work.

What has this to do with Oscar? A documentary about her life, RBG, was a movie theater money-maker after its May release and is nominated as one of this year’s Oscar best documentaries.

The Ginsburg family and many notables from Bill Clinton to conservative icon Ted Olson contributed. RBG herself is said to have provided a list of events approved for shooting by film-makers Betsy West and Julie Cohen. The film is now available for rent on Amazon and YouTube.

Included in the best song Oscar list is the song Diane Warren wrote for the end credits, “I’ll Fight,” sung by Jennifer Hudson, who was all set to perform it on the Feb. 24 TV broadcast.

(Oscar Notes: Now there is considerable fury that neither it nor nominated songs from The Ballad of Buster Scruggs and Mary Poppins Returns will be performed during the telecast. Such was the latest word –not just shortening the telecast but making sure three songs don’t get in the way of Lady Gaga’s “Shallow” from A Star Is Born or the Black Panther pop hit “All the Stars” by rapper Kendrick Lamar.)

(Oscar Note 2: To eliminate time, it was excluding from TV broadcast several technical categories and relegating them to commercial breaks with highlights of acceptance speeches broadcast later in the show. Assuming, I would add, if there is time. This covers cinematography, film editing, live-action short and makeup-hairstyling. That decision inflamed hundreds of big names in the industry who sent a letter February 13 calling the idea “nothing less than an insult.”

(Oscar News Feb. 15: Bowing to internal pressure, the Academy restored the four categories to telecast and even will have them go first.) 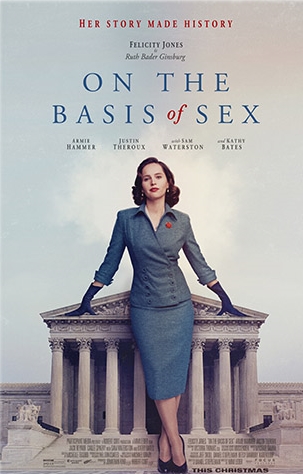 On the Basis of Sex.

The Notorious RBG’s fighting spirit almost put a second tune on the best song Oscar list. Nominated and played under final credits for On the Basis of Sex is a powerful song by Kesha that almost made the final cut and I frankly found even more meaningful and triumphant than “I’ll Fight.” It was aptly called “Here Comes the Change.”

Would that had been the title of the movie. On the Basis of Sex sounds like a Natalie Wood and Tony Curtis sex comedy. For sake of box office, the movie ignored how RBG herself in a court brief decades ago changed “sex” to “gender” to seduce the judicial panel of men hearing the case. Now the moviemakers hope the word “sex” will seduce the public.

Filmgoers would be best off seeing the documentary RGB before the biopic On the Basis of Sex, because her real life gives some credulity to the movie, which heavy handedly borrows elements from her life for its most interesting scenes.

Turns out she was a comely young wife, played well by Felicity Jones who seamlessly drops her British accent for Brooklyn exactitude, married to a tall popular lawyer, played almost too tall and too handsomely by Armie Hammer. (Martin Ginsburg was a pre-eminent tax lawyer who more than supported his wife’s career and died of cancer in 2010.)

Turns out she did take legal notes for him in college while also caring for him during his first bout with cancer, while also caring for their child while she aced her classes. Turns out her daughter Jane, a law professor today, was the plucky blunt adolescent pictured so rawly in “On the Basis of Sex” that her frontal assault modernistic manners make us feel we have stumbled into a Lifetime movie.

The film sought but never got a single Oscar nomination. I blame director Mimi Leder’s decision to not let the story breathe on its own without constant intrusive shaping.

Despite Sam Waterston as the ultimate Harvard chauvinist, despite Kathy Bates in a blunt cameo as a no-nonsense civil rights legend, the movie has too many scenes of hostile judges melting into smiles in the face of RBG arguments, of the timid young wife bumping a mike or otherwise showing nerves and then becoming more eloquent than Meryl Streep, of solo shot after solo shot of male justices moved to acceptance by Ginsburg’s court persuasion. If only it would have worked that way, without the blunt opposition or hard-to-pin-down resistance to legal reality the courts showed when it came to women.  Speeches praising what she did are not a substitute for real drama.

The barriers the film throws in her way from colleagues as well as opponents feel manufactured into simplicity and conversational giveaways. Even today we don’t fully realize how many rights we presume to have are not secure; they are still being fought for by Ginsburg and her acolytes.

Despite some well-meaning acting, the biopic is so blatantly a tribute and scene-by-scene commentary on Ginsburg’s importance – and a pointed guide to the obstacles she had to overcome — that it comes across as a breed of fawning she never sought nor needed.

One thought on “Oscar Films: Two RBG Films, One Good, One Bad”