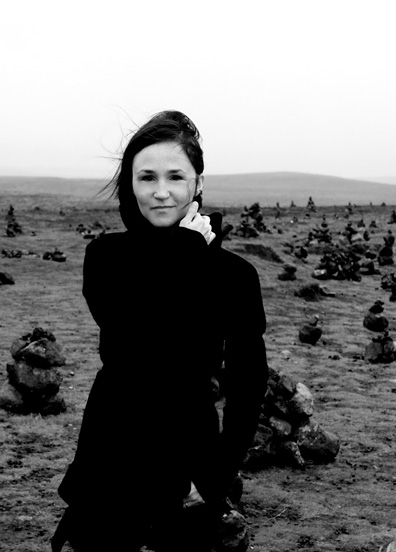 Present Music begins a new stage in its history this week, presenting a concert curated by Eric Segnitz, long-time ensemble member (on violin) and new co-artistic director of Present Music. Present Music will be inaugurating a new stage, the Jan Serr Studio, which recently opened its penthouse location perched atop of the UW-Milwaukee Kenilworth Building on Prospect Avenue.

Emerging Icelandic artist Anna Thorvaldsdottir will be featured in two works. Present Music pianist Cory Smythe participated in a recent recording of her works and will reprise his piano solo. Segnitz has been smitten by her unique style. “Her music [seems to emerge from] some kind of natural phenomenon. You can hear the ice crackling on the lake.” In the Light of Air: Luminescence is part of a larger composition ideally surrounded by computer-controlled lighting and ice sculptures – as in this YouTube of a recorded concert. Segnitz acknowledges that “we couldn’t afford all of that” for one movement of the piece.

Given the acoustical properties and electronic resources of the UW-Milwaukee Peck School of Music, Segnitz selected a number of pieces with electronic components. Many compositions incorporate voice tracks. Although varied, the voices convey attitude. Sophie Lacaze celebrates a party in the Australian outback over a bed of flute music and imitated bird song. Beth Anderson blends the calls of an auctioneer with electronic sounds. Alex Temple poses a question for friends – “If you had told me 10 years ago that someday I would willingly ________, I wouldn’t have believed you..” The answers emerge over an ensemble of flute, piano and electronics. In What You Want, Gilda Lyons offers a grotesque caricature of a West Coast Barbie doll culture: “In this portrait of her, I explore the personal and communal cost of losing oneself to the perceived normalcy of the one-dimensional, the palatable, the unthreatening, and the vacuous.”

In a performance only on tape, social commentator, Laurie Anderson offers a humorous PSA offering insights into how we perceive the familiar music around us – in this case, the national anthem. Segnitz has chosen short literature readings as well, including Gertrude Stein reading one of her works.

Angélica Negrón represents efforts by contemporary artists to explore non-traditional uses of instruments. Her work uses 30 music boxes, many to be “played” by audience members. 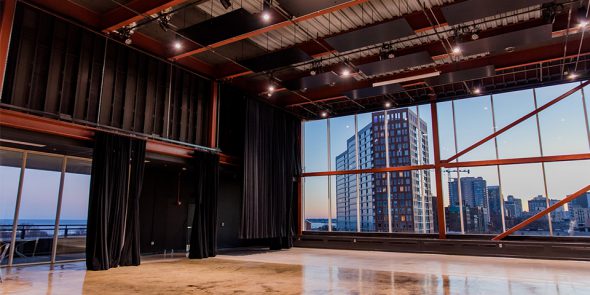 Jan Serr Studio. Photo from the UW-Milwaukee Peck School of the Arts.

A few chosen composers reflect a solid commitment to music genres. In a work called Bullanguera, Argentinian Sonia Possetti offers a contemporary take on “New Tango.” Like Astor Piazzolla decades ago, her perspective is reshaping contemporary tango. Her ensemble arrangement was commissioned by Present Music.

Three composers offer more familiar contemporary classical music. Caroline Shaw, by now well known to Present Music audiences, is represented by Entr’acte. Jennifer Higdon, recently featured by the Milwaukee Symphony, is featured in a breathlessly-paced piano trio – Fiery Red. Although new to most, composer Anna Thorvaldsdottir fits within this category as well. Her works will move rapidly into the chamber and symphonic repertory.

All of the composers are women. The program did not start this way but became a secondary theme. The result is a diverse and provocative sample of this century’s musical works created by women and non-binary composers.

Just this past week, Present Music announced that Eric Segnitz and contemporary New York conductor David Bloom would serve as co-artistic directors as Kevin Stalheim, founder and leader for 37 years, retires. Segnitz understands what has made Present Music work. “Kevin met Milwaukee halfway. He responded to what people responded to. [He created] a feeling of event and adventure.”

I’m drawn to this concert as well by the unique character of the new studio. In a form similar to the Lincoln Center at Columbus Circle location in New York, the players perform in front of large windows that allow the audience vistas of Milwaukee – creating an ambiance unique in Milwaukee.

Details about the program and the 12 artists represented may be found on the Present Music website.

Present Music offers two very different choices this week. On Thursday evening, February 21, guests gather at the venue for a dinner buffet at 6:00 p.m. before a 7:30 p.m. concert. Reserve in advance. $100 tickets to that event may already be sold out. The ‘casual concert’ begins at 7:30 p.m. on Friday evening, February 22. Tickets ranging from $10 (students) to $35 and $55 seating are available for purchase by phone (414-271-0711×2) and online, as well as at the door. The Jan Serr Studio is located at 2155 N. Prospect Ave. Take the elevators to the penthouse level.

The Present Music season closes on June 1 with Stalheimtime. Present Music will present works of composers important to new music and personally to Stalheim at his last concert as Artistic Director. The concert will include now established 20th-century composers John Adams, Aaron Copland, and Elena Kats-Chernin. This landmark event will include a post-concert party.