‘Roma’ Is a Masterpiece

But will its origin via Netflix doom its chances of winning Academy’s favor? 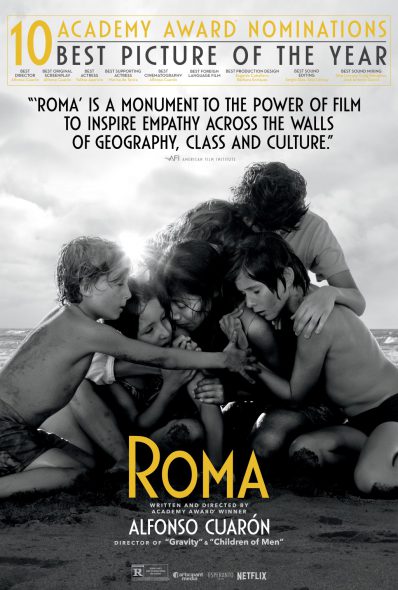 Describing the methods of Roma — its black and white panoramic vision of Mexican upper middle class living in the 1970s — could make the film sound artsy and hard to grasp. If so, I have done disservice to Mexican director and likely Oscar winner Alfonso Cuarón. (He has also directed A Little Princess, Children of God and Gravity.)

His frozen lush landscapes and architectural framing, his gentle humor through observation, his planes flying to some distant place, his scenes through or within window panes, his lapping water, his tracking shots and elaborate panning sometimes stitched together seamlessly as if one elegant camera shot; then the one single long intense camera shot that captures the forensic brutality of a hospital birth – all are totally on behalf of humanity and memory and leave us in awe.

This film is basically only available on Netflix (there is a huge story in the refusal of most movie houses to let it be part of their Oscar marathons). Watching it at home gave me the sensation the computer screen had expanded to 40 feet in width to capture the vision. There are a few mystical sidetrips to argue about, but what is cinematically extraordinary is how much of Cuarón’s artistry is at the service of his story and his determination to make us see.

Cuarón offers society in nonjudgmental relief, but we also are witnessing emotional poetry in such devotion to what happens to house servant Cleo, played by a non-actor who is now up for every acting award in sight.

In his memory fictionalization, Cuarón explores the strange but typical world she inhabits between hired hand and beloved family member. He makes us rethink our usually politically ingrained view of social classes, since the upper middle class is clearly privileged and complacent yet shares a genuine affection for Cleo, who by the end is revealed as victim, true hero and essential life force.

Cleo is played by an ordinary-looking indigenous Mexican native with a radiant expressive face named Yalitza Aparicio. While I prefer to see a variety of work honored at awards time (lots of people can hit it out of the park at first try on film), this was perfect casting in so personal and challenging an epic. Aparicio is vividly and naturalistically used by Cuarón, who also wrote this memory play about his own upbringing.

The immature lover who impregnates her is more into his martial arts skills than into Cleo, painfully clear as he parades nude around the bedroom before abandoning her. But Cleo is never berated except by herself for her unwed pregnancy. The family she serves and whose house she cleans – a controlling wife, an unfaithful physician husband, an ever present grandmother, and four children who dote on Cleo — assumes full responsibility for her care, though the father’s sympathetic brevity is mere professionalism.

The lover’s gang, captured on an open field exercising martial arts, is terrorizing in its metronomic obedience. Yet in the watching crowd, only Cleo can do the acrobatic move they stumble over. Later it is her lover who inadvertently causes the stillborn birth of their daughter.

Images linger. Parakeets and dogs cavort inside the house. A lone TV antenna is fixated on the roof. Water gently flows over tiles revealing a daily mopping chore for Cleo even as a plane in flight appears in the sudsy water. A shopping trip for a baby crib occurs in the middle of a homicidal street riot. A car maneuvering an interior driveway reveals volumes about the grandiose wife and the straying husband, while solid, always present Cleo represents emotional continuity for the children.

This unhurried yet captivating journey – a diorama of society within a simple year in the life of Cleo — adds layer upon layer: a forest fire, a riot, murders and a near drowning. Yet Cleo’s life unfolds almost passively as if these are natural moments for people we normally treat as invisible. Cuarón’s subtexts haunt us – flight and space travel, windows and floors, unnoticed beauty in routine vistas, a fire bursting upon an upper class garden party.

I don’t know if by February 24, the studio industry that dominates the Oscars will overcome its animosity to television streaming services to applaud Netflix for a film of such quality. Roma did capture 10 nominations, including Best Picture. But the final decision is a political reality surrounding a film that eschews politics to open our eyes.