'Mary, Queen of Scots' is far less satisfying than 'The Favourite’. The reasons are many. 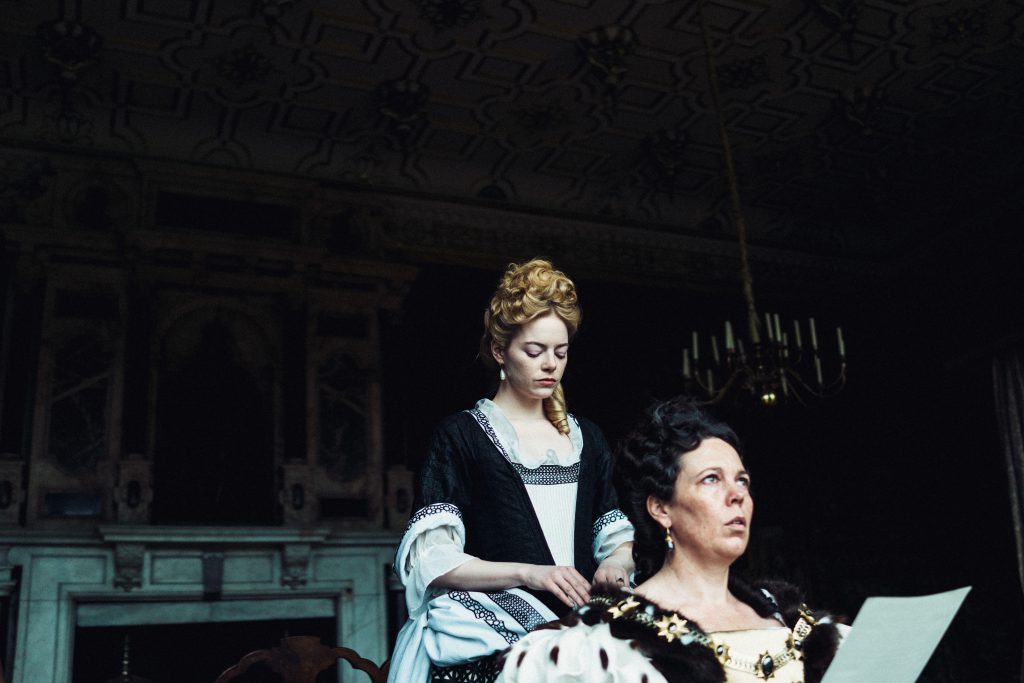 Two lavish bewigged and begowned costume dramas, both steeped in British royal history, vied for movie eyeballs as 2018 closed out and their takes may be similar in their ominous foreboding, but quite different in up close versus long distance conflict.

The costumes and settings are feasts for the eyes. Yet as cinema I much prefer the macabre and comedic yet deadly court intrigue of The Favourite to the somewhat heavy breathing feminist overwriting of Mary Queen of Scots.

Mary is blessed in the costumes of Alexandra Byrne and strong leading actors in Saoirse Ronan as Mary and Margot Robbie as Queen Elizabeth I, actors forced to pontificate too much on their plight, which includes being pawns in the machinations of men (which they were) and fabricating queenly philosophy at a manufactured meeting (which they didn’t).

Both films may send patrons scurrying to the history books to see how much of the happenings are invented or historically acceptable, and the simple answer is, in both, basically dialogue and events are developed around real characters in eras when court intrigue was the name of the game. The history is not accurate, the outcomes are at the service of the screenwriters, but passing attention is paid to the times.

Mary is freer with the facts since the basic conflict between two queens separated by space vying for power has long been the stuff of historical speculation and literature. Did one really try to kill the other? Or did they respect each other’s situation?

Director Josie Rourke handles excellently the production elements, but feels freer to suggest the emotional conflict over the factual one, including silly dialogue like “Only one Queen can understand another.” Her movie succumbs to overwriting and over-explanation, forcing the actors into extended screen time when they should just hit their points and move on.

The Favourite in contrast relishes the clumping around of a pudgy Queen Anne with agonizing gout and flighty moods – and sudden bursts of the sad girl lost in duties beyond her abilities yet with absolute power that makes her dangerous. Olivia Colman plays her full theatrical tilt, like Miss Piggy at the height of anger. But she makes it clear that the queen’s bursts of outrage are related to how over her head she is in the complicated Tory vs. Whigs affairs of state. The rest of the court has become expert and vindictive in playing on her uncertainties.

Director Yorgos Lanthimos recognizes the real audience grabber in his 18th century romp is the ruthless quest for power over Anne between her ladies in waiting. Rachel Weisz is the high-born established power behind the throne. Her role is really Sarah Churchill (to be historically accurate) whose affectionate nickname for the queen was Mrs. Morley.

Emma Stone is Abigail, the comely poor relation Sarah takes in to her everlasting regret. The fight of these two for the queen’s favor – a sexual fight as well as social fight – takes over the film, with little surreal splashes whether gathering home remedies in the forest or splattering blood while shooting not so clay pigeons.

Stone is constantly intriguing, as nasty and untrustworthy as she has ever been on screen and clearly delighted by the demands. But the real powerhouse performance is Weisz as the striding snippy Sarah in mannish clothes and overbearing manner, yet capable of pretending sweetness when the circumstances warrant. The details of their battles – who is up, who is down and when – are something audiences should discover for themselves. The director leaves the outcome up to the uncertain manic eyes of Queen Anne herself, overrun by her pet bunnies.

There are powerful music cues as well from composer Max Richter, though he is not nominated. He adds to traditional lilting English madrigals and chamber music sequences with repetition of a long cello note and a quick percussive tap. It’s a device that builds our tension much like that shrieking violin note in “Psycho.”

The texture of the film and its almost surreal sections — plus some elaborate character-related dances that push the edge of courtier abilities — provide an observant eye from the outside on all the double dealings that pile up inside.

The Favourite has been nominated for Best Picture, Lanthimos for Best Director, Colman for Best Actress and both Weisz and Stone for Supporting Actresss.