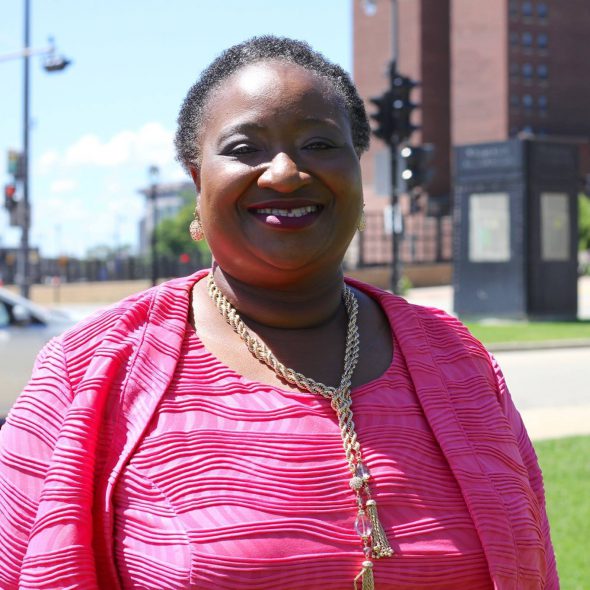 In January, Milwaukee County Sup. Felesia Martin introduced her first piece of legislation since her election in April 2018.

It was  a resolution that would rename Columbus Park — located just south of Hampton Ave. between N. 72nd and N. 74th streets — as the Indigenous People’s Park. It received approval in committee, but Martin asked that her resolution be sent back to committee during the latest county board meeting.

Martin told Urban Milwaukee there were some factual errors in her resolution that needed correcting. Also, she wants a better analysis of the cost for the name change, as she believes it will be lower than the $9,800 originally quoted.

When the resolution was introduced, Martin said it aimed to recognize the contributions of groups that have long been in Wisconsin. It’s not an attempt to rewrite history, she said.

The idea for the resolution came from her constituents in the 7th district, she said. And this fact, along with the rationale for amplifying the story of indigenous peoples, are part of parcel of Martin’s governing philosophy, as she explained it.

“I am here to amplify the voices of all the people of the seventh district,” she said. And if you dig deeper on that point, it’s not just a throwaway line for her.

Martin said she wants to represent all the interests of her district, even those she doesn’t agree with. “Yes I am a Democrat” she said. “But I want to govern from the seventh district.”

She has an interesting political background. Before becoming a Democrat, she found her political home in conservative politics. Though, in recent years, that position has become untenable for her, she told Urban Milwaukee.

As an individual, not just an elected official, Martin said, she feels a duty to include and listen to all views and interests. This, in part, is how she came to sponsor legislation changing the name of the park.

Martin said her district is incredibly diverse, and also a very engaged district. Which are among the reasons she has lived there for more than 40 years, she said. And governing the district, she said, will require her to listen to the many different backgrounds and points of view found there.

“How I want to govern is through that diversity and inclusion,” she said. “ I’m also here to represent those that don’t think like I do.”

Martin seems uninterested in scoring points or crushing political opponents. “I just think we can do more when we’re not screaming at each other.”

Martin emphasizes that treating others with respect, regardless of politics, simply because they are a fellow person, is a faster route to good governance than anything else.