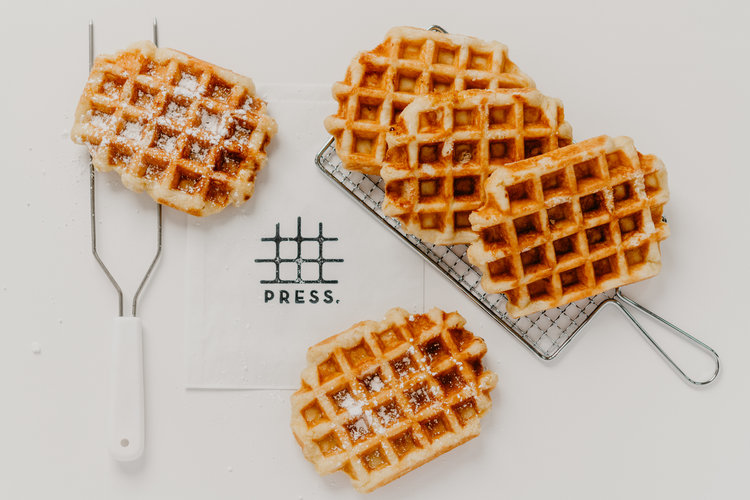 The owners of the food retailer Press. Belgian Liège Waffles — yes, that’s their name — expect to open a new concept in the Third Ward the spring. Proprietors Aaron Rosko and Emily Thomas plan to open their cafe, called Press. Au Marché, at 207 E. Buffalo St. “within the next few months.” The cafe’s name means “at the market,” and is also a nod to Rosko and Thomas’ beginnings with Press. Belgian Liège Waffles at festivals and farmers markets.

For Rosko and Thomas, opening a brick and mortar cafe is “the dream.” Rosko shared more details with the Milwaukee Business Journal’s Sari Lesk:

Beyond waffles, the café will also serve soups and baguette sandwiches.

Rosko said the idea behind Press. is to create a European, open-air market concept where people can come for both good food and an experience…

He said the 3rd Ward is a suitable location for their business because people in that area of the city seek quick bites before going back to work. The café will have limited seating for people who want to eat in-house. Otherwise, they can treat their orders as street food.

National burger chain Wahlburgers will open its first Wisconsin location this summer. The restaurant will be located at 20111 W. Bluemound Rd., at The Corners of Brookfield retail center. Wahlburgers was founded by chef Paul Wahlberg, who operates the company with his brothers, actors Mark and Donnie.

The menu at the Brookfield location will include “house-made signature burgers, sandwiches, salads and sides and specialty drinks, including adult frappes and floats.” The new location was announced by Wahlburgers parent company Hy-Vee Inc., a supermarket chain based in Des Moines, Iowa. BizTimes reporter Maredithe Meyer had the story:

“Hy-Vee is excited to open its fourth Wahlburgers location, and to bring a new dining experience to Wisconsin,” said Randy Edeker, chairman of the board, CEO and president of Hy-Vee. “Families will enjoy great food in a fun atmosphere, served with the excellent customer service and hospitality that Hy-Vee and Wahlburgers are known for.”

“We’re thrilled to be chosen as the first Wahlburgers location in Wisconsin,” said Robert Gould, vice president of U.S. operations for The Corners’ developer IM Properties. “Wahlburgers’ food and drink offerings and fun, upbeat environment make it the perfect addition to our tenant mix. 2019 is shaping up to be an exciting year for The Corners, and restaurants like Wahlburgers will continue to deliver our unique town center vision.”

Hy-Vee owns 245 stores across eight states in the Midwest. Wahlburgers currently operates 29 restaurants, with locations in 19 states and Canada.

A new arcade bar is expected to open in Cudahy in the next week. The establishment is called The Very Famous X-Ray Arcade, and is slated to open at 5036 S. Packard Ave. on February 9. The new venture is spearheaded by Nick Woods, who acts as the manager and vocalist for punk rock band Direct Hit. Woods and a “regional investment group” have renovated the space, making improvements to the interior, plumbing and electrical systems.

The business at 5036 S. Packard Ave., in Cudahy will feature video games, a sound system for live music that was previously installed at the Pabst Theater and retro console gaming, the release says. The arcade will also offer televised sports, a 162-inch projection screen and a food and beverage program.

Once open, The Very Famous X-Ray Arcade will be open 4 p.m. to 12 a.m. Thursday, 4 p.m. to close Friday and Saturday and 12 p.m. to 4 p.m. Sunday. Hours will most likely be extended during the summer.

A new kiosk is serving up sweet treats at Brookfield Square (95 N. Moorland Rd.). The business is called Woops!, and serves handmade French macarons, which are available in over 20 flavors. Woops! also sells 30 international desserts, some of which are imported from Europe. The New York City-based franchise, owned by Shahnoza Saadati, makes many of the desserts sold at the Brookfield location.

Woops! began in 2012 when four friends from various parts of the world (Israel, France, India and the U.S.) opened a macaron pop-up shop at the Holiday Shops in New York City’s Bryant Park. The pop-up was launched on a whim; but in nine short weeks they had sold 100,000 macarons and developed a cult-like following.

It was at that point that the friends realized: “Woops!,” they had a thriving business. Building on the momentum and popularity of Bryant Park, the four friends soon opened boutique mall kiosks in major malls throughout the Northeast and beyond.

I.D., a shared-plate restaurant located at 415 Genesee St. in Delafield, is hosting a “one-night-only supper club experience.” The event will be held on February 5, and will go from 5 p.m. to close. The restaurant will feature a special menu, along with supper-club themed decor and uniforms for staff.

Fredrich takes a look at the menu: