How Evers and Legislators Can Cooperate

Marquette Poll shows where voters of both parties agree. Will GOP leaders take the hint?

Tony Evers. Photo from the State of Wisconsin.

Last November’s election, resulting in a Democratic governor (and attorney general) facing a heavily Republican legislature creates uncertainty about the future of Wisconsin. Are we facing four years of stalemate? Or will the two parties find areas in common that help move Wisconsin forward?

Initial actions by the legislative leadership does not lead to optimism. They may decide that maximizing the number of Tony Evers’ goals that the Journal Sentinel’s PolitFact labels as “promises broken” offers the greatest political rewards.

Both Governor Evers and the Republican leaders, including Assembly Speaker Robin Vos and Senate Majority Leader Scott Fitzgerald, have expressed a desire to work together. But the most recent Marquette Law School Poll suggests that Evers’ expressed desire is more credible with voters. Using very similar wording, it asked state residents two questions about the eagerness of the new governor and the legislative leaders to cooperate.

The graph below shows shows the results, with respondents seeing legislative leaders as much less interested in cooperating. (In this and the following charts, I have adopted the color scheme of a traffic light, where red means No, green means Yes, and yellow means Not sure.) The green color show that 47 percent of respondents see Evers trying to cooperate and only 22 percent see legislative leaders doing this. 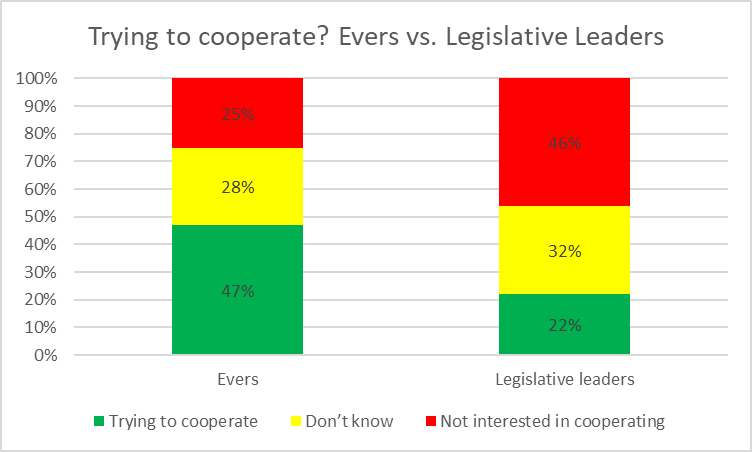 In common with most questions in the poll there is a strong partisan skew to the answers: many more Democrats than Republicans believe that Evers want to cooperate. Still, only 28 percent of Republicans agree that the legislative leaders are interested in cooperating, compared to 33 percent who say they are.

Although the question names no names among the legislative leaders, it is likely that many of the voters would think of Vos and Fitzgerald, who recently took advantage of the post-election, lame-duck session to orchestrate a package of bills limiting the power of Evers and new Attorney General Josh Kaul. Given that record, it’s understandable that voters would doubt the sincerity of the legislative leaders’ professed desire to cooperate. To Vos and Fitzgerald cooperation apparently requires that Evers govern as if he were a Republican.

The next chart shows the results to the poll’s question about the lame-duck acts: “As you may have heard, after the November elections the legislature passed legislation that placed some new limits on the powers of the governor and the attorney general. Do you generally approve of the legislature taking these actions or do you disapprove of those actions?” A majority of the voters disapproved.

Note: This chart, and those following, results from adding those independents who said they leaned to one or the other party to that party. In addition, those saying they “strongly” and “moderately” approved or disapproved were combined. 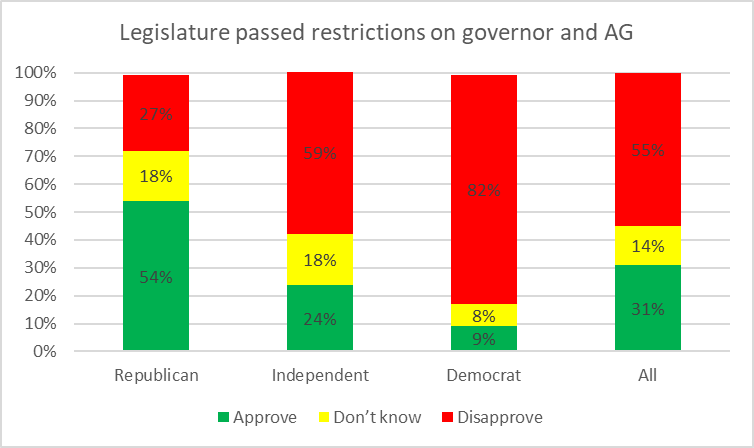 As with most issues polled by Marquette there is a strong partisan skew to the results. Democrats overwhelming disapproved of the lame duck laws, as did independents. Even so, about a fourth of Republicans recognized that changing the law to hobble winners of the election was bad policy.

Are there issues where there might be common ground? Here are three, that a strong majority of all voters support and at least a plurality of Republicans also support, according to the poll.

One question asked, “Should Wisconsin accept federal funds to expand Medicaid, also called Badger-care, in order to cover those with incomes up to 138% of the poverty line or should the state reject federal funds and not expand Medicaid coverage beyond the poverty line as it is now?” The chart below summarizes the results. Note that party leaners are included with that party. 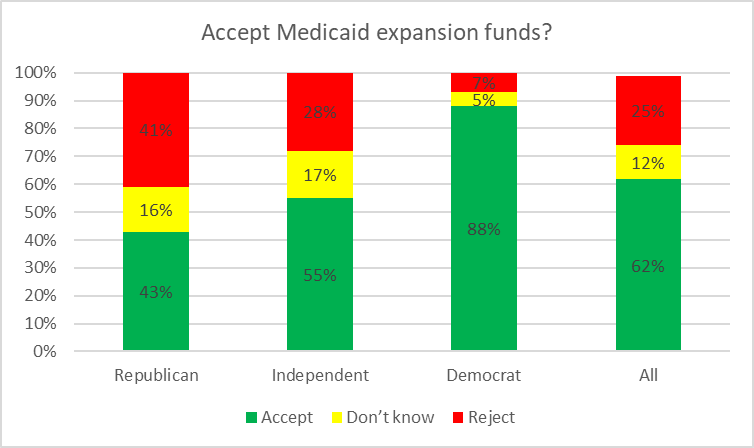 Having Wisconsin adopt the Medicaid expansion is the rare example of the much searched for, but seldom found, free lunch. Increasing the number of people with health insurance while freeing up Wisconsin tax revenue is an opportunity that seldom comes around.

The arguments against it never made a great deal of sense. In rejecting the federal funds, Governor Scott Walker argued that there was no guarantee that the program would continue. Yet his scheme of making room on Badgercare to accommodate adults making less than the poverty level was dependent on the continuation of the Obamacare exchange.

The argument against expanding Medicaid seems to have shifted, from concern about the continuation of the federal cost sharing to the inadequate level of Medicaid payments to providers. The obvious solution is to reexamine the payment levels and adjust them.

A second question asked, “As you may know, redistricting involves redrawing maps of legislative districts for the state legislature and for Congress. In your opinion, who should be responsible for drawing legislative districts – the state legislature and governor or a non-partisan commission?” There was overwhelming support for a nonpartisan commission, including among Republicans. 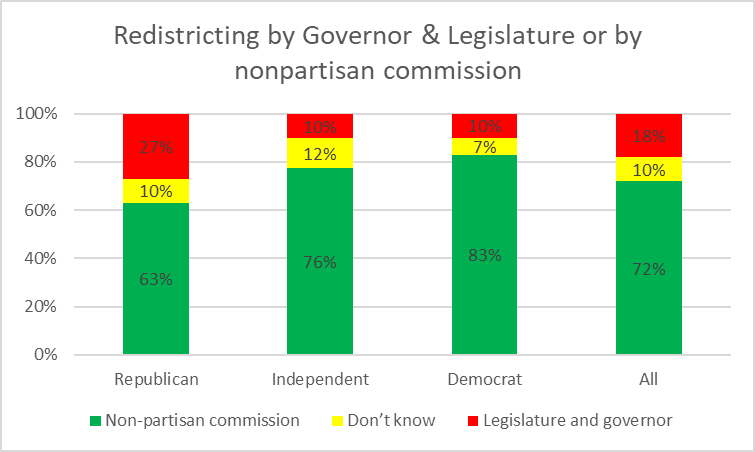 Redistricting by Governor & Legislature or by nonpartisian commission

A third question asked, “Would you favor or oppose a major increase in state aid for special education for public school students?” Here there was also overwhelming support, including from Republican voters. 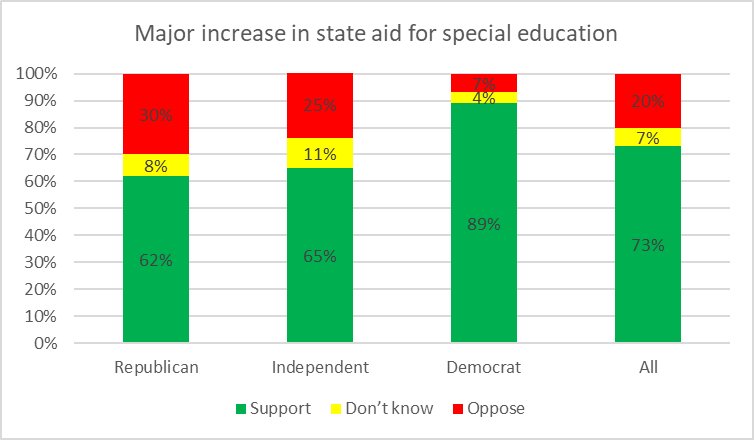 The Journal Sentinel’s PolitiFact recently announced that it would be tracking 25 promises it says Evers made during the campaign. The list includes the Medicaid expansion, but not a nonpartisan commission for redistricting nor more aid for special education.  Among the ratings they intend to use is:

Promise Broken: The promise has not been fulfilled. This doesn’t mean the official didn’t try — remember, we are rating outcomes, not intentions. A promise might fail because there was not support in the Legislative branch, due to court rulings, federal changes, or other issues.

In effect, PolitiFact is promoting dysfunctional government. Many of the 25 promises on the list are dependent on the cooperation of the legislature. By calling them Evers’ promises broken, PolitiFact rewards the legislature for sabotaging Evers’ agenda.

The MU poll shows there are key issues where Evers and most voters in both parties agree. That’s an opportunity for state leaders of both parties rather than a chance to sow division.

One thought on “Data Wonk: How Evers and Legislators Can Cooperate”