By Gretchen Schuldt, Wisconsin Justice Initiative - Jan 28th, 2019 11:11 am
Get a daily rundown of the top stories on Urban Milwaukee

The number of possession of marijuana cases filed in Milwaukee Municipal Court fell 17 percent from 2017 to 2018, court records show.

There were a total of 994 adult and juvenile possession of marijuana charges opened in 2017 and 824 in 2018, according to the figures. That is a year-to-year decline of 170 cases.

The caseload reflects police activity, but is not a total count of arrests, as some cases may get dismissed before they get to court.

In November, 75 percent of City of Milwaukee voters supported legalization of recreational marijuana. Some 52 cases were filed that month. In December, however, 134 cases were filed, the most since November, 2017. 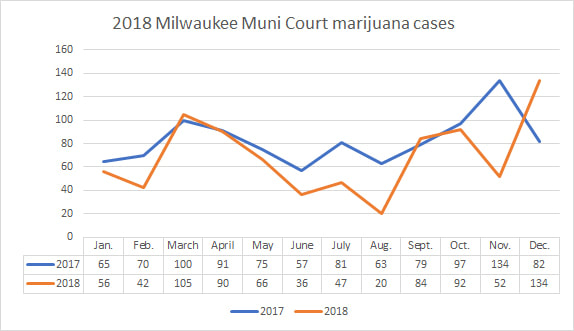