A wonderful back-up singer with Dylan and the Stones, she made everyone sound better. 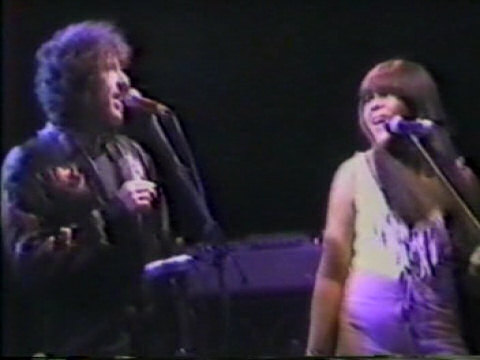 Bob Dylan and Clydie King. Photo is in the Public Domain.

Rock and Roll has a dubious background/foreground relationship. Often the foreground is occupied by popular singers who, truth be told, are not exactly nailing it while their polished backup vocal talent make them look good. This relationship was explored in the great documentary Twenty Feet From Stardom, available on Netflix, iTunes and Amazon.

We suspect but maybe don’t want to admit the cosmetic appeal of pop music is a big factor in popularity. In a white majority (for the time being) country, it makes perfect sense that the most popular acts will look like their audience. Milli Vanilli is the most egregious example: they didn’t even sing on their records. Other weaker singers have mixed their vocals way back and in effect join the chorus. This is not a criticism of great writers like Paul Simon, or great performers like David Bowie, their artistry is indisputable. But they got some serious mileage out of their backup singers, Ladysmith Black Mambazo and Luther Vandross.

There are an abundance of great African American backup singers, and this make sense. A lot of them studied music from an early age — not at Berklee or Julliard, but in the churches all over the country. One of them was Clydie King, who died recently at age 75. She made a lot of people look (maybe I should say sound) a little better than they were. Bob Dylan was one.

She joined him during his born-again phase, one a lot of critics like more than I do. Clydie was soon singing duets with Bob and before long they were a couple. They made beautiful music together including this lovely duet I discovered while reading her obituary in The New York Times. It’s nice to know Dylan was a fan of Dion’s “Abraham, Martin and John.” Here he demonstrates his casual ease at the pianos, and basks in the presence of one great harmony singer.

Clydie and her colleague in soul, Merry Clayton, were reluctant (but probably well paid) backups on “Sweet Home Alabama,” a very different kind of song for them. While there is some justification I don’t quite grasp singing on a tune that glorifies racist governor Lester Maddox, the music speaks for itself. If you need to cleanse your palate afterwards, try the Rolling Stones brilliant “Tumbling Dice,” an electric number that rises to atomic when she opens up.

Gospel music informs rock’n’roll. It infuses it with energy and spirit. It’s odd to think of this elevated spiritual music mixed in with the saltier songs of the Stones, but a lot of what is gospel is also blues. They share a confused lineage — Thomas A. Dorsey, often called “the father of black gospel music,” spent a few formative years on the other side of the tracks playing blues. Any way you stir it you get a powerful potion — add a little to your music and it flies, subtract it and you’re in the land of squares.

So these unsung heroines of song deserve another round of applause as one of their best, Clydie King, heads upward to join the celestial choir. Maybe Aretha’s looking for someone to harmonize with.