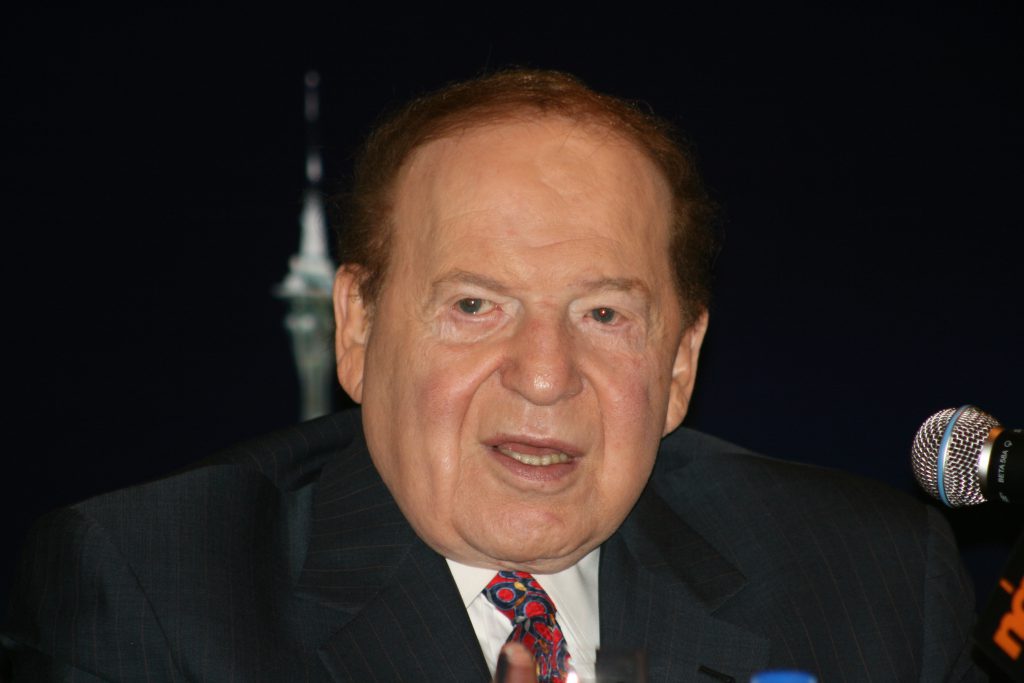 Ryan attended the meeting with several others, including Norm Coleman, the former Minnesota senator who was chair of the Republican Jewish Coalition. “They laid out a case to Adelson about how crucial it is to protect the House,” as a Politico story recounted.

As an elected official, Ryan was not legally permitted to solicit the desired donation. So he “left the room” and “Coleman made the ask and secured the $30 million contribution,” the story notes. Adelson gave the group a whopping $30 million, three times as much as he gave it in 2016. And while the Republicans ultimately got routed in the November 2018, that money probably help protect some GOP incumbents who were reelected.

The Congressional Leadership Fund “operates independently of any federal candidate or officeholder,” its website declares. That’s why the check from Adelson couldn’t be handed to Ryan, in order to maintain the legal fiction that the group is “independent.”

New York Times columnist Thomas B. Edsall points to such meetings as proof of how the U.S. Supreme Court’s Citizens United decision in 2010 “has unleashed a wave of campaign spending that by any reasonable standard is extraordinarily corrupt.” The decision struck down restrictions on independent expenditures by political groups, in essence opening the door to unlimited spending by corporations and labor unions.

This massive increase in campaign spending, mostly by corporations, has happened nationally, but also in Wisconsin, where Scott Walker obliterated all past records for campaign and third party dollars raised in an election for governor. Adelson contributed $270,000 to Walker’s 2012 recall and 2014 reelection campaigns.

Nationally, since 2010, “independent expenditures and other forms of outside spending have grown exponentially,” Edsall notes, rising from $203.9 million in that year to  $1.48 billion, six years later. In the non-presidential year of 2018, the total was $1.31 billion, as Open Secrets has documented, a more than six-fold increase since 2010.

The growth in Wisconsin wasn’t quite as bad, but still huge, as the Wisconsin Democracy Campaign has documented. The “record-smashing amount spent by these outside electioneering groups totaled nearly $61.7 million” in 2018, the group noted, which was was “69 percent higher than the $36.6 million spent in 2014 elections and more than three times the $18.9 million spent… in the 2010 fall elections.”

The 2018 spending is good news for Democrats, but bad news for democracy. It will merely push both parties to work even harder to raise outside money from wealthy donors.

And while Paul Ryan was spotlighted in the Politico story, you can bet that the same kind of meetings were going on with Democratic politicians affiliated with their “independent” funding groups.

Justice Anthony Kennedy, who wrote the Citizens United decision, included an explanation of why these unlimited donations wouldn’t have a corrupting influence: “The appearance of influence or access, furthermore, will not cause the electorate to lose faith in our democracy. By definition, an independent expenditure is political speech presented to the electorate that is not coordinated with a candidate.”

The logic of the court for decades has been to allow great freedom for independent expenditures because, after all, they have complete separation from the two political parties. Except, of course, they don’t.

But at least in other states, the two parties must be very careful to avoid any obvious coordination with these groups. That’s why Ryan walked out of the room. More importantly, independent groups must guess what kind of ads to run and how to time them, without checking with a candidate’s campaign, which would break the law. This could mean money is wasted by these outside groups, and sometimes the ads may even hurt the candidate they back.

But in Wisconsin Walker brazenly used R. J. Johnson as his top campaign advisor, though Johnson also ran the “independent” Wisconsin Club for Growth, and Walker’s campaign aides typically advised fat cat donors to donate to the Club for Growth because there were no legal limits on such donations. And Johnson could make sure the campaign and Club for Growth worked neatly together.

This obviously illegal arrangement was declared legal by the Wisconsin Supreme Court, in perhaps the worst decision ever written by Justice Michael Gableman, which is saying a lot. (Gableman has since retired from the court.) And so Wisconsin is one of just two states in America where there are no bars to coordination between campaigns and third party groups that Kennedy assured us are totally independent. Apparently Gableman forgot to read that decision.

So you can bet Tony Evers campaign for governor was colluding just as much with outside groups as Walker’s campaign was in the November. Which is to say that none of the protection from corrupting influences Kennedy noted are to be found in Wisconsin. We live according to the wisdom of Michael Gableman.

The world given us by Kennedy has nearly returned America to the pre-Watergate days, Edsall argues, one described by Washington Post reporter Dan Eggen, where “The money poured into Richard M. Nixon’s reelection campaign from all corners: Six-figure checks flown by corporate jet from Texas; bundles of payments handed over at an Illinois game preserve; a battered brown attaché case stuffed with $200,000 in cash from a New Jersey investor hoping to fend off a fraud investigation.”

If the U.S. Supreme Court hasn’t fully opened the door to such doings, certainly the Wisconsin Supreme Court has. One can argue as to how much this massive campaign spending decides elections and how effective the resulting onslaught of negative ads is: the wonky folks at 538.com conclude it has less impact than we might think.

But there is no doubt that unlimited donations provide more opportunity to demand favors from politicians and this whole seedy spectacle of influence peddling in Washington D.C.  and Madison, WI is corrupting our government and convincing voters all politicians are scoundrels.

Yes, there is a gleam of hope from Democratic candidates like Bernie Sanders who have rejected all big donations. But the reality in a nation where the wealth gap has become so massive is that many little donations from the little people can be easily offset by a few donations from the Sheldon Adelsons or Tom Steyers of this world. Citizens United has helped make a democracy already plagued by corruption even more corrupt, and Gableman’s decision has assured that Wisconsin will help lead the way to that sorry destination.