Nonsense In Front of City Hall

The sculpture by Tony Cragg is a great work — but not for the reasons you might expect. 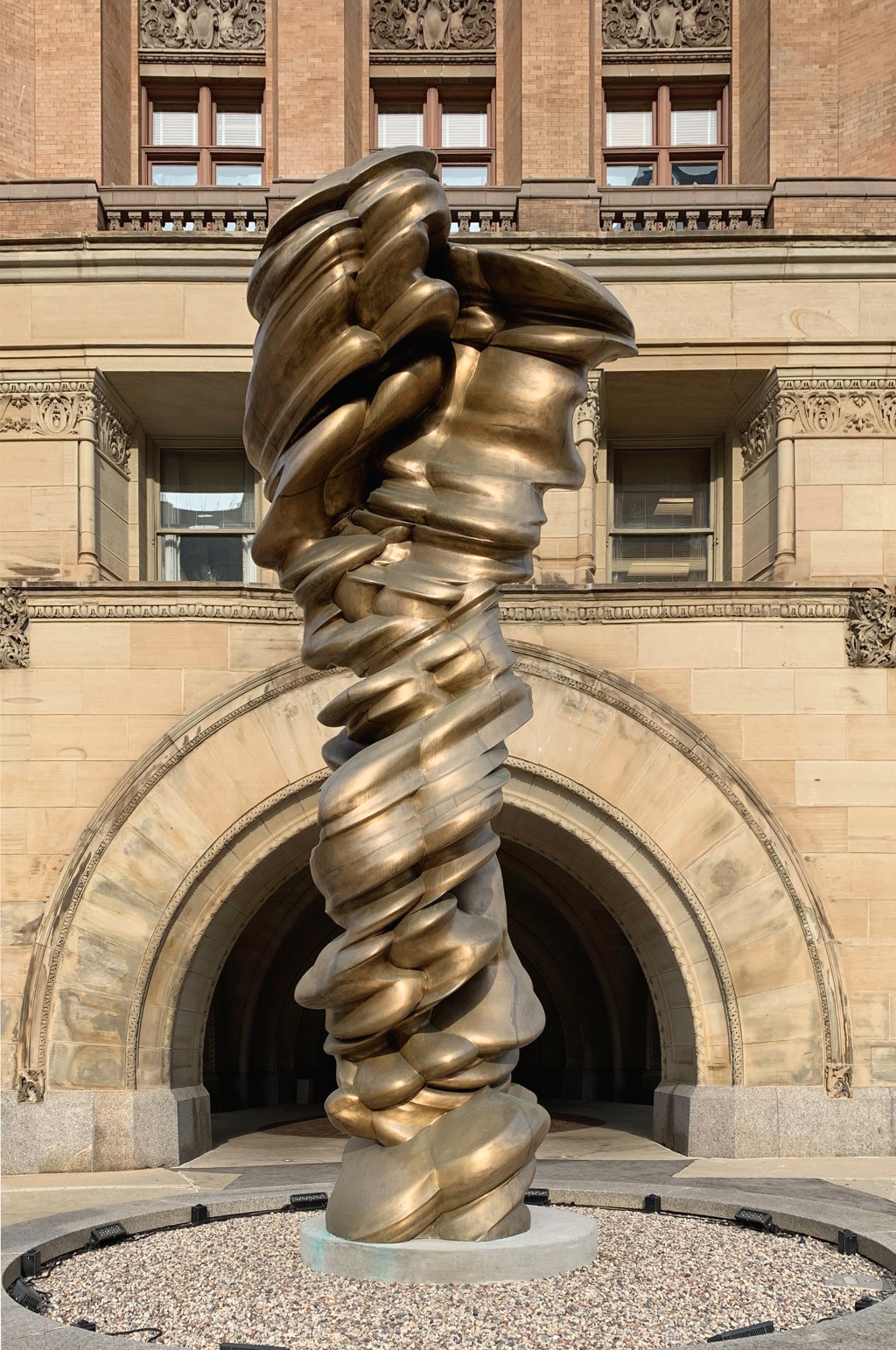 There is a new sculpture in front of City Hall.

“Mixed Feelings” by Tony Cragg is from the Sculpture Milwaukee Project, created by Steve Marcus in 2017, and then given to Milwaukee by an anonymous donor whom everyone seems to think is named Steve Marcus. According to Steve Marcus, “The legacy of public art in Milwaukee will carry on with this tremendous gift to the City of Milwaukee.”

It’s one of the best, if not the very best work of art Marcus brought to Wisconsin Avenue over the last two summers. And one of the most expensive — a similar work recently sold at auction for more than $600,000. No one can claim this is minor work by a major artist, as many art literati did when the Mark di Suvero landed at the end of Wisconsin Avenue. “Mixed Feelings” is a signature work — a great work by great artist working at the height of his powers.

Mayor Tom Barrett said the Cragg will “continue to inspire and provide beauty.” Both Marcus and Barrett talk about how great it is to bring a world-class artist to Milwaukee, saying all the things people say when they don’t know what to say about art. 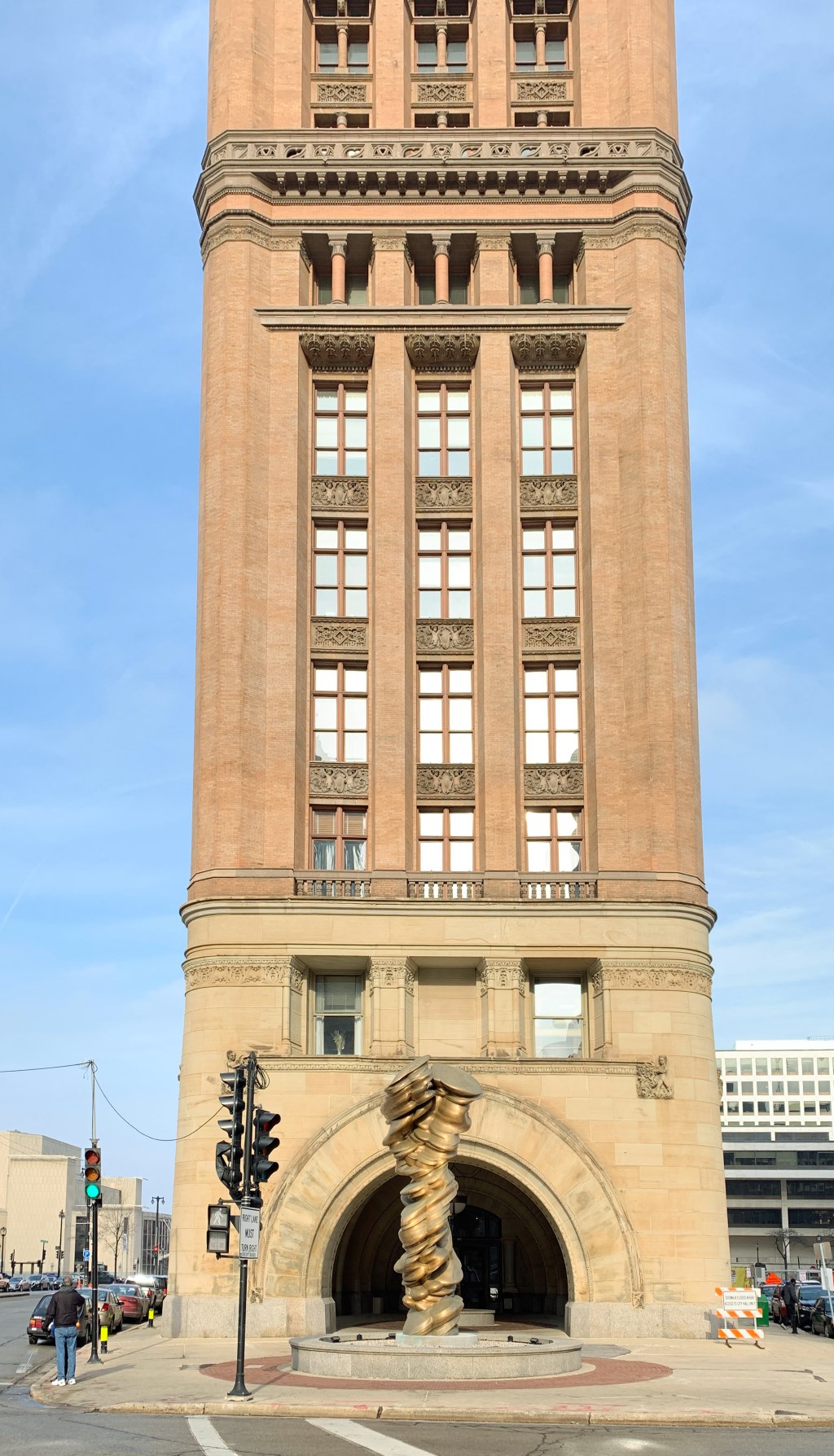 Okay, besides the platitudes, why this sculpture in front of City Hall? Built during the height of the progressive movement in America in 1895, City Hall was the tallest building in Milwaukee for nearly 80 years and stood as a monument to civic virtue.

After more than one hundred years of confusion, the pointlessness of Modern Art has finally produced a discernible public benefit. “Mixed Feelings” avoids all present and imagined polemics. No one can be aggrieved by this undulating mass because it doesn’t mean or represent anything to begin with. “Mixed Feelings” doesn’t offend; it upends.

“It’s globular layering keeps the mind slipping and sliding,” I wrote in 2017. “A big dramatic nothing, and that’s the joy of it. Not being able to wrap your mind around something is the gift of Modern Art.”

I think the artist would be delighted with the placement of this work. “We have streets, roads, cities and buildings full of boring forms,” Cragg said. “We have an awful tendency to simplify everything because it’s economic. We’re driven by certain economic systems…that cut straight lines, make flat surfaces, cut out squares in circles, and make everything really simple.”

Cragg’s work is a void that stands in relief from the straight-lines we draw between meaning and things, the saturation of messages and brands, and the banalities heaped upon art. “Mixed Feelings” doesn’t make sense in front of City Hall, and that is the challenge — and the  joy of it.

4 thoughts on “In Public: Nonsense In Front of City Hall”