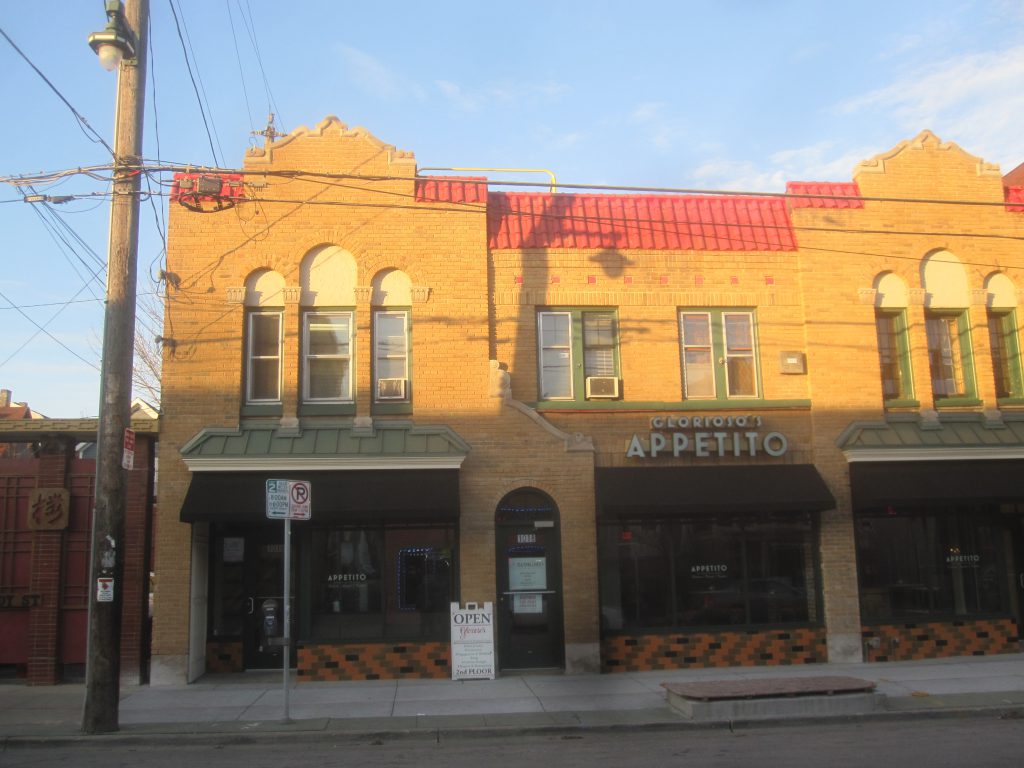 The old place remained vacant until now. This week and next will see a series of invitation-only events introducing “Appetito,” which is described as:

A culinary center that features an open kitchen, an event space, and a cooking school. Appetito is a place for people to gather over food and beverage and experience the cuisine of Italy. Our culinary school provides cooking classes, chef demonstrations, food and beverage tastings, guest chefs, culinary nights, chef’s counter, private cooking parties and corporate team building events. The event space accommodates over 100 people for private & corporate events with on-site catering.

Michael Glorioso gave a quick tour of the place on Thursday afternoon, a day before the first event was to be held.

“Appetito is a platform to bring people together for food and beverage,” he says.

The facility is composed of three elements, he says:

Glorioso, 65, worked for a beverage distributor before retiring and returning to Milwaukee about a decade ago, rejoining the family business. Along the way he has picked up a third career of sorts as a real estate developer: the new Glorioso market cost over $4 million, and the investment in Appetito is about $1.5 million. Michael superintended both projects while simultaneously keeping up with his day job at the market, which involves everything from cleaning spills to negotiating with vendors. (One thing he does not do: handle the money. He’s got enough headaches.)

He has a simple rule during his construction management role, and that is to keep nonessential people away from the project until it is time to be opened to the public. Another rule is derived from a sign in the store that paraphrases Einstein: “If you don’t have time to do it right, when will you have time to do it over?”

Glorioso was happy to take his time with the restoration of the old family store. The creation of Appetito took over one year of construction time, in addition to years of planning. Glorioso had to contend with high demand for skilled tradespeople at a time of nearly full employment, and he came up with a solution that would ensure that the job was done right: He told the contractors to take their time. They would be able to schedule work on Appetito during slack periods and weekends.

Appetito is located in two adjacent buildings in the Brady Street Historic District. For decades the facades of the buildings (the east dates to 1910 and the west to 1927) were undistinguished, hidden behind concrete block and plywood painted green, red and white. The most noticeable effect of the remodeling can be seen here, with the restoration of the facade done in a historically appropriate fashion, and approved by the city. In a sense this is a merely cosmetic measure, since the big bucks in this project went down the drain. Literally.

Glorioso steps out the door to the rear of the building where the air conditioning units were surrounded by sandbags. “That was to keep them from flooding,” he said. The lots to the north are much higher, and drained to the Appetito property. Glorioso had contractors excavate the rear and install a recessed drain, connected to the sewer system. He had contractors fabricate a fixed ladder for access to the roof (new) and its mechanical equipment, also new. The building was tuckpointed, and the exterior is complete. Maybe. “I’m thinking of installing larger gutters” Glorioso says, pointing up. This basic stuff is not pretty, but it is pretty expensive.

Glorioso’s Italian Market feeds many locavores with a variety of Wisconsin products, and Michael Glorioso employed the “buy local” philosophy while selecting equipment — all of it new — for Appetito. He points to a glistening SubZero refrigerator in the demonstration kitchen. The Wolf range is built like a locomotive. Glorioso opens cabinets in the kitchen revealing dozens of Vollrath induction ranges for use by students. “No open flames,” he adds. A trip to the men’s restroom reveals plumbing fixtures by the Vollraths’ Sheboygan County kinfolk, the Kohler family. It also provides a moment of reminiscence for Glorioso. Approaching the door he said, “Here is where my grandfather’s butcher block was.” Entering the bathroom he paced off a couple of steps along the east wall. “Here is where the 12-foot counter was where we cooked everything for 64 years.”

Glorioso did not have to go far to find wood paneling — he busted up the old meatlocker and had it milled into boards. The original floor was beyond repair. It was replaced with tongue-and-groove oak planks milled from an old warehouse in Rhinelander. “And not those flimsy grooves, either,” Glorioso says of the quality of the hidden feature. Recycled Cream City Brick veneer covers columns in the Eventi space, which is outfitted with cafe tables, yet designed so that the room could be cleared of furniture for large events. The Scuola demonstration kitchen is arranged so that the students face the instructor with Brady Street beyond. A television screen above the range will show the meal in progress. Wheeled carts for the Vollrath ranges line the walls; they were locally fabricated. The carts can be deployed into the center of the room during demonstrations, yet easily hauled out of the way for the party to follow.  The folks in the catering kitchen will soon be busy turning out “restaurant-quality food at grocery prices,” Glorioso says.

The first public event at Appetito will be “Risotto and Beyond with Chef John Coletta,” to be held Saturday January 26th at 11 a.m. The $55 event will include a cooking demonstration, a book signing and a sampling to follow. 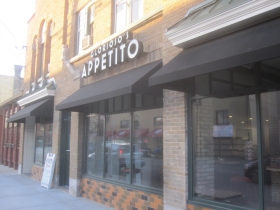 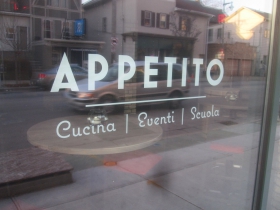 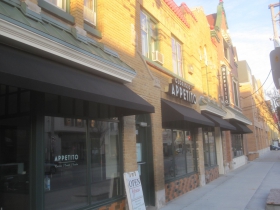 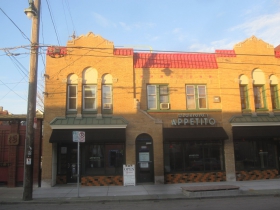 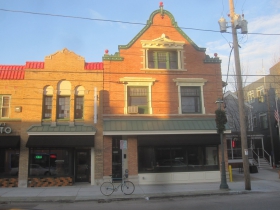 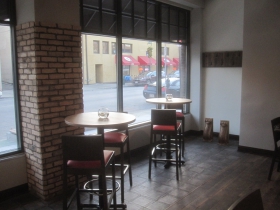