MOWA’s exhibition challenges notions of how glass can be used to create art. 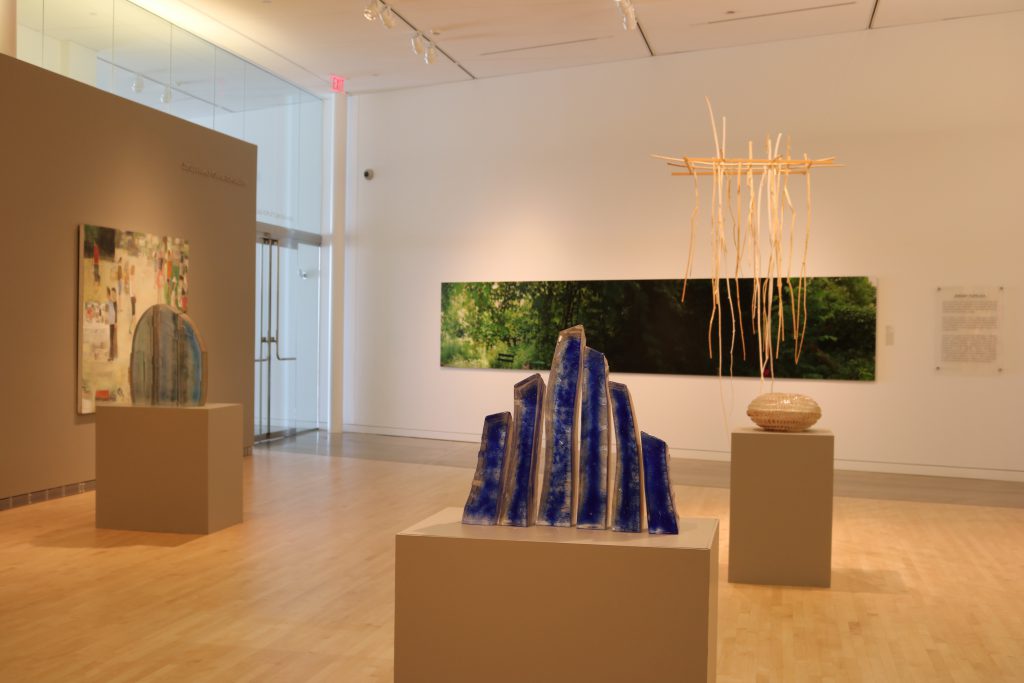 The idea of glass as art is often confined to stained-glass windows, pretty figurines, and ornaments, rather than sculptures. Which makes the Museum of Wisconsin Art’s current exhibition “Fore and Aft: A Vitreous View of Time” something different. The show challenges notions of how glass is used as an artistic medium with nine innovative pieces which examine the similarities between the fragile substance and the impermanence of time.

Littleton and his students experimented with colored glass and other art techniques, among them printmaking.

“They were as much scientists and inventors as artists,” said Friedman.

“I had an immediate visceral curiosity about working with this glamorous material, with all the drama and theatrics involved,” he notes.

Popelka’s fascination with fossils, the aesthetics of Wisconsin rock and ice formations, and how they are preserved with time are reflected in his sculptures. He often works with sand molds, which adds a bit of grit to some of his pieces.

“Mollusk,” a piece created with hot glass, seems at first glance to be made out of a more durable and porous substance. The spherical sea creature is made up of small segments which look like individualized fossils.

“Edge,” a blue-tinged sculpture with rectangular shapes carved into it, appears to represent the symmetry found in nature, while the cobalt blue “Serac” seems to be inspired by the cool beauty of a glacier.

Although natural landmarks and fossils have existed for millions upon millions of years, time is fleeting and everything is in constant flux.

Popelka notes that his sculptures are “a reminder of the tenuous nature of anything, including ourselves.”

Breadon, who was raised in Ireland, creates work that carries on a centuries-old Celtic storytelling tradition. Five vibrantly-colored blown glass works, among them “Bradan (Salmon),” “Nuadas Helmet,” and “Ualaigh (Weight)” tell stories of battles, the oppression of the Irish people, brave soldiers, and mythological creatures. Some works contain intricate etchings that echo illustrations from the Book of Kells.

“This use of imagery and story gives me a personal connection to a history that for generations relied on the verbal and lyrical documentation to exist,” says the artist, who has been blowing glass since 1994. Breadon considers glass an intellectually stimulating, albeit sometimes frustrating, medium to work with.

“It’s what drives me back to the studio each day to continue to explore and improve each idea,” he says.

Depictions of extinct plants like sphenophyllum and calamites (similar to horsetail plants) sit on top of an antique white painted table. Small details — thin conic petals and individual leaves, for example — are a testament to Lipman’s skill with glass formation.

Below this the artist has arranged everyday items such as cards, glass bottles and plates, and books and coins with musical instruments and even a device that lowers caskets.

Viewers get a glimpse of two drastically different worlds—one a lush natural landscape completely untouched by human activity, the other consisting of only material things.

Friedman hopes those who visit the diverse Fore and Aft exhibit gain a different perspective on the medium. “This will challenge what people will think of glass,” he says.

He notes that MOWA wishes to hold future exhibits dedicated to glass: “We recently acquired some wonderful pieces.”

“Fore and Aft: A Vitreous View of Time” Gallery 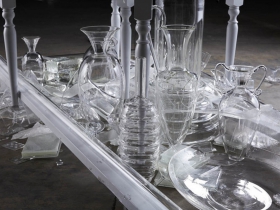 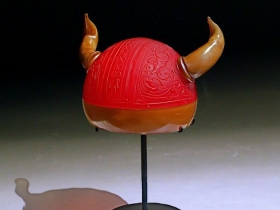 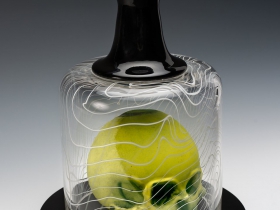 “Fore and Aft: A Vitreous View of Time,” through March 31 at the Museum of Wisconsin Art, 205 Veterans Ave, West Bend