Reporter Edgar Mendez reflects on his arrest and treatment by Milwaukee Police for doing his job. 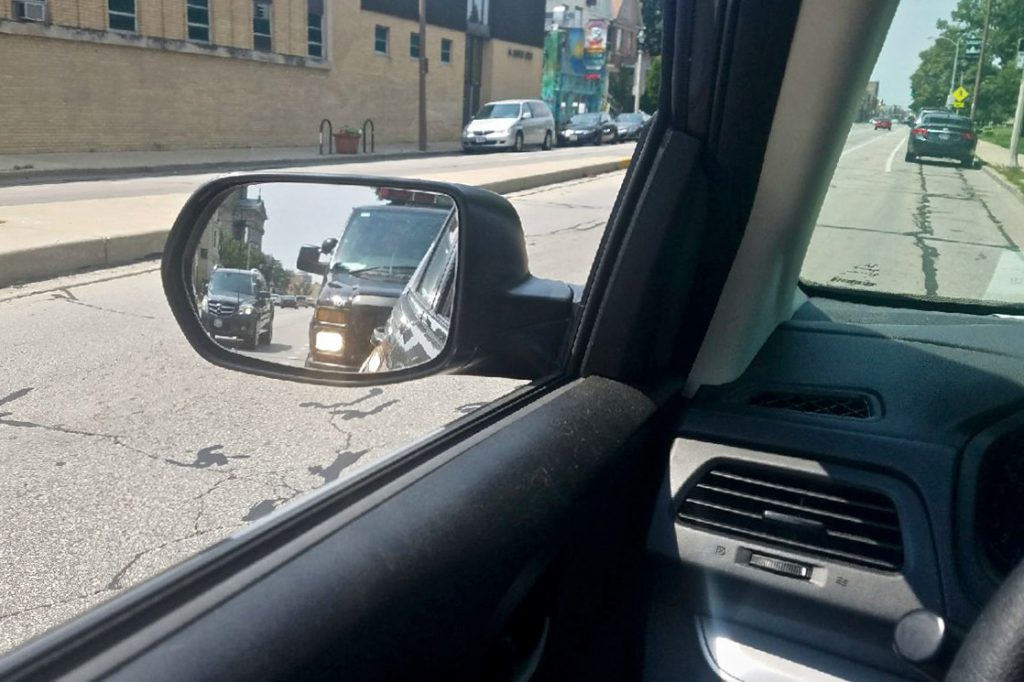 It has been almost four months to the day since I was pulled over, handcuffed and placed in the back of a paddy wagon, and then handcuffed to a bench at Milwaukee Police Department’s District 2 headquarters for more than a half an hour. I also was fingerprinted, photographed and interrogated by two officers for an additional 45 minutes.

Monday, Municipal Court Judge Derek C. Mosley ruled “not guilty” on the original charge of trespassing. I was issued a $50 parking ticket for violating a “no parking” ordinance, but if I’d been charged with that violation the day I was arrested, I would have been spared the experience of being treated like a criminal.

My crime: entering the District 2 parking lot at 245 W. Lincoln Ave., to take photos of squad cars for a story I’d written about MPD response times. It wasn’t as if I’d come in under the cover of darkness. It was about noon on Aug. 5 when I entered the lot, parked and readied my camera to take photos for a story that was to be published the next morning. Shortly after parking, I spoke to non-uniformed MPD officer Dustin Frank in the lot, identifying myself as “Edgar Mendez, a reporter for the Milwaukee Neighborhood News Service.” I told him I was  taking photos for a story I’d written. His response was “that’s fine.”

On the stand during the trial, where I was represented pro bono by Jim Gramling, a former municipal court judge, Frank testified that he wasn’t exactly sure what I’d said. He stated that I either said I was a reporter or that I was working with other officers who were in the lot at the time. Nevertheless, he testified that after he said “that’s fine,” he continued to his vehicle and drove away. 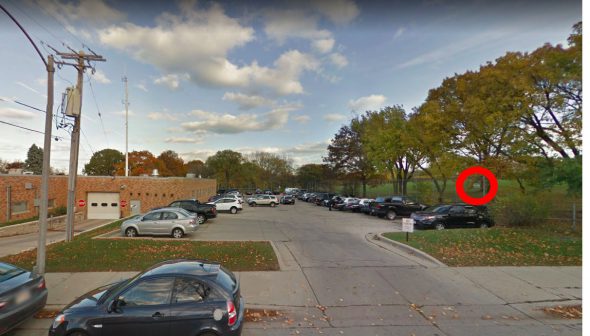 The “no trespassing” sign is circled in red in this screenshot from Google Street View.

Shortly afterwards, a second officer, Chris Ottaway, who also testified in court against me, acknowledged that he, too, saw me in the lot, and that I’d waved at him with one arm, cradling a camera with the other arm. Rather than approaching and speaking with me, he entered the police station, according to his testimony. Eventually, he followed me in a squad car  and pulled me over on South 9th Street and West Lincoln Avenue, after I’d spent a few minutes taking photos and was on my way home to my family. He asked me if I saw the “no trespassing” sign in the lot, and I replied that I had not.

At the trial, City Attorney Jay Unora based his case on the assumption that I’d seen the “no trespassing” sign and ignored it. The sign was not posted at the entrance of the lot and I had not seen it.  (A new “no trespassing” sign was posted at the entrance after my arrest.) According to the testimony of Ottaway and Frank, the sign is posted about 60 feet to the right of the path where vehicles entering the lot would drive, and hangs above a parking spot.

In his closing statement, my attorney pointed out that the sign was not clearly visible, was small and inconspicuous, and was placed far from where someone who was driving forward should be focusing his attention.

Mosley, while ruling that I had in fact violated a “no parking” order, agreed that the sign was not clearly visible and that Frank’s own testimony gave me reason to believe I could take photos in the lot. Four officers were listed as witnesses in the case against me and were present, though only Frank and Ottaway testified. Both agreed that I was cooperative during my arrest.

Though I emerged with my integrity and shaky trust in our justice system intact, I can’t say that I walked out of court with a smile, or even feeling vindicated. The truth is that the entire experience was traumatic. In addition to being placed in the paddy wagon and handcuffed, fingerprinted and interrogated, the police officers erased some of the photos I took that day, threatening to confiscate my camera if I didn’t agree. I also was informed that if I asked for a lawyer while being interrogated there was a chance that I’d have to sit in county jail while the process played itself out. 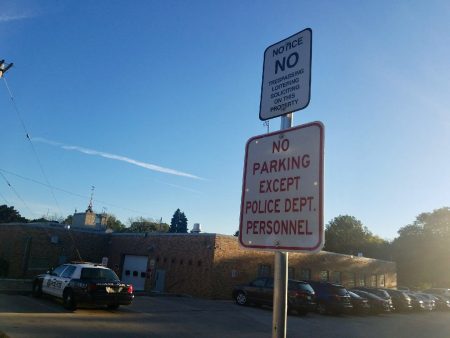 A new “no trespassing,” sign was placed at the entrance to the lot after Mendez was arrested in August. Photo by Edgar Mendez/NNS.

Even the fact that I had to defend myself in a trial was troubling. I had never imagined that while taking photos for an article — working to support my family — I’d be arrested and interrogated. Of course I’d seen people interrogated on TV while watching “The First 48,” but I never thought I’d go through it myself.  I couldn’t believe that I was being grilled about a sign that I didn’t see, what my article was about, what my true intentions were that day and the whereabouts of my family.

I wondered afterwards if what happened to me was because of my brown skin, or because I was a reporter writing about the MPD. You have to remember that my arrest occurred at a time when President Trump had attacked people of Hispanic descent, repeatedly declared that all the news he didn’t agree with was “fake news,” and begun to call the press the “enemy of the people,” a sentiment he continues to espouse.

“Could it be all of these things — or none?” I’ve wondered many times since. It is important to note that my arrest occurred weeks after the murder of MPD officer Michael J. Michalski, a devastating crime I’d also written about. Surely MPD was under a heightened sense of threat. However, from the moment I encountered the first officer in the lot, and as I came into contact with each of the five additional officers that afternoon, it was evident that I was a reporter and in the lot only to take photos for my story. None of that seemed to matter, nor did the fact that the “no trespassing” sign was awkwardly placed inside the lot and was obstructed by trees.

As a reporter, I understand that this case brings up broader issues, including whether these types of incidents could have a “chilling effect,” discouraging reporters from carrying out their mission to inform the public. That is one reason it was important for me to fight the charge.

But, more personally, I believe the  broadest issue my case brings forth — which goes beyond the judge’s ruling of not guilty on a trespassing charge — is that in Milwaukee, relations between people of color and MPD officers are already strained. Treating people as I was treated is part of the reason that the relationship is frayed. I was fortunate enough to have a good lawyer and a news organization behind me; not everyone is that fortunate.

Police Chief Alfonso Morales, who, like me, grew up on the South Side of Milwaukee, has spent much of his time in his new position speaking about how he’s implementing new policies, and working to retrain current officers and better train new ones.

Here’s a new policy that can be implemented right away, without millions of dollars in training costs. Why can’t officers simply treat persons of color the way they would like to be treated or the way they’d want their children to be treated? A simple change like that could work wonders in improving community/police relations and could help spare residents from traumatic and humiliating experiences such as the one I endured.

One thought on ““Not Guilty” Ruling Doesn’t Make Things Right”