By Analise Pruni and Allison Dikanovic, Milwaukee Neighborhood News Service - Nov 14th, 2018 10:36 am
Get a daily rundown of the top stories on Urban Milwaukee 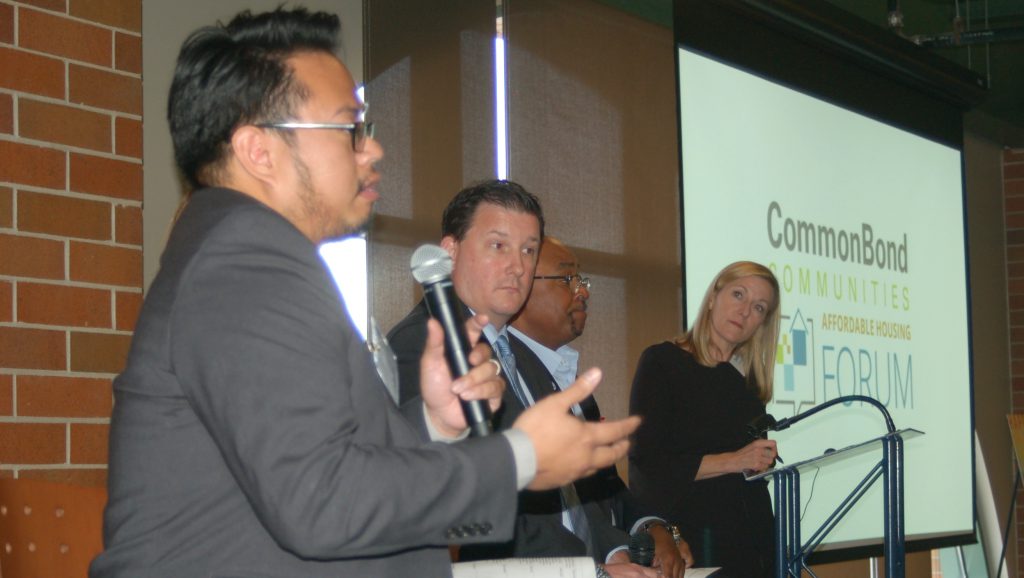 In some census tracts in the City of Milwaukee, about one in 10 renters was evicted in 2016. To illustrate the severity of the eviction crisis, Raphael Ramos, director of the Eviction Defense Project at Legal Action of Wisconsin, looked out at a recent gathering of 200 people in the Miller Park Skyy Lounge and noted that one person sitting at each table could be evicted.

Ramos was speaking figuratively, but the numbers he referenced are very real. According to data recently released by the Wisconsin Policy Forum, in 2016, one out of every 24 renters in the City of Milwaukee was formally evicted and in some census tracts, more than one in 10 renters was formally evicted.

His comments were part of a panel discussion hosted by CommonBond Communities, a housing and development nonprofit, and the City of Milwaukee to discuss the findings of six months of work on the issue of eviction prevention in Milwaukee. In May, the groups formed a new coalition comprising more than 30 stakeholders that met monthly. Their analysis of the landscape of services and suggestions for areas of improvement are detailed in the new Wisconsin Policy Forum report, “No Place Like Home.” Rob Henken, president of the Wisconsin Policy Forum, presented the report’s findings.

Other speakers on the panel included Andi Elliot, CEO of Community Advocates; Preston Cole, commissioner of the City of Milwaukee Department of Neighborhood Services; and Jim Mathy, housing administrator at the Milwaukee County Housing Division. 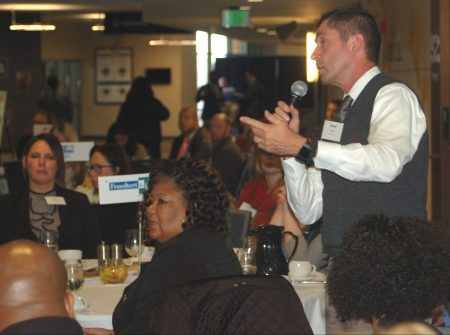 David Nelson, an associate professor at the Medical College of Wisconsin, drew connections between housing instability and other issues affecting vulnerable populations. Photo by Allison Dikanovic/NNS.

Milwaukee’s eviction rate ranked 59th nationally among 261 cities with populations over 100,000 in 2016. It had more evictions than cities such as St. Louis and Kansas City, but fewer than Cleveland or Indianapolis. According to Eviction Lab data from the report, 6,313 Milwaukee County households were evicted by court order, 5,687 of which (90 percent) were in the city of Milwaukee.

Data gathered by CommonBond demonstrates why investing community resources in housing stability is beneficial to the city as a whole. It found that for every $1 invested in eviction prevention, $4 in “social benefit” are generated. Social benefits include improved educational outcomes for children, lower healthcare usage and decreased use of homeless shelters.

Although the WPF report did not prioritize needed improvements, coalition members strongly advocated coordinating eviction prevention services into a more cohesive system. The initiative was the first time all of the groups had ever gathered in the same room together, even though they all work on the same issue in the same city.

Irma Yépez Klassen, housing policy director for the City of Milwaukee, co-led the initiative with Joe’Mar Hooper, the Wisconsin market leader of CommonBond. It was funded with a grant from the Medical College of Wisconsin.

“We felt it was really important not to limit who was at the table and make sure we were getting a voice that was representative of all the members of our community,” Yépez Klassen said, despite some concerns that there would be “too many cooks in the kitchen.”

Many city, county and nonprofit groups such as the City of Milwaukee Department of Neighborhood Services, the Milwaukee County Housing Division, Community Advocates, Legal Action of Wisconsin, IMPACT 2-1-1 and Mediate Milwaukee provide eviction prevention services and information, but had never pooled their resources before.

“We wanted to make sure that everyone knew who was working in what space, so we could leverage the resources and expertise around the table to better serve the community — both landlords and tenants,” Yépez Klassen said.

For example, some people weren’t aware of Mediate Milwaukee, a nonprofit that provides free mediation services for tenants and landlords to prevent court-ordered evictions. Anyone can request mediation before an eviction case is filed in court, which can avoid the negative effects of having an eviction on a person’s record. The organization also provides free services in the Milwaukee County courthouse on Wednesdays to mediate eviction cases.

Ramos said that the small claims court processes 40-80 evictions cases every day, yet Amy Koltz, executive director of Mediate Milwaukee, said her organization’s services are being underutilized. Stakeholders identified this gap in information and communication as an area needing improvement, so people can access services that are already available.

Noting the limitations of small claims court, WPF Senior Researcher Joe Peterangelo said that the coalition also focused on the possibility of creating a specialized housing and evictions court.

“With evictions, it’s somebody’s home and it has such a major impact on their lives,” Peterangelo said. “You can see why a specialized court would make sense for that, especially from a preventative perspective.”

Group members also agreed that a “front door” for cohesive eviction prevention services, such as a tenant-landlord resource center, is needed.

The idea of a front door or “one-stop shop” appealed to Ariam Kesete, a real estate developer and landlord who invests in property in the 15th District on the northwest side, where evictions are more concentrated than other areas of the city. She said she has had success keeping tenants for longer periods of time by building positive relationships and communicating effectively. She was unaware that services such as landlord-tenant mediations were available.

“That would take a lot of tension off of me as a landlord,” she said, referring to a third-party mediation service. She said it would be easier for her if there were one place she could refer tenants for housing stability support, rather than needing to know about and refer people to multiple organizations that serve different purposes. “Those systems need to collaborate.”

The “front door” could be a website or a call center that would simplify the process of accessing educational, legal and financial services. Many members of the group agreed that eventually a physical location would be ideal.

]Peterangelo said the Madison Tenant Resource Center could serve as a model for Milwaukee.

“If you’re looking for housing assistance, legal advice, they cover a lot of ground and they’re definitely viewed as the front door and also refer people out to other places,” Peterangelo said. “That’s something that we don’t have.”

Another gap the report addressed was the need to better support people at risk of eviction because of a temporary financial crisis that puts them behind on rent payments.

“Sometimes people get evicted for as little as $100-$150 a month, which can mean the difference between housing stability and homelessness,” Hooper said. Both Community Advocates and Milwaukee County offer financial assistance in certain situations, but they’re still working to make them as effective as possible.

Bringing the coalition together, identifying the current landscape of services, finding the gaps and suggesting possible areas of improvement are just the first steps to prevent evictions in Milwaukee.

“To get everybody in the room is a win, but we can’t stop with the report,” said David Nelson, an associate professor at the Medical College of Wisconsin and coalition member. He said that the group needs to continue researching, evaluating and developing action steps and policy plans.

A big part of that process will be figuring out who has the resources to fund some of these needed initiatives, Yépez Klassen said, but the return on investment will be well worth it.