Schimel says it “appears” challenger has defeated him.

By Shamane Mills, Sarah Whites-Koditschek and WPR Staff, Wisconsin Public Radio - Nov 7th, 2018 11:40 am
Get a daily rundown of the top stories on Urban Milwaukee 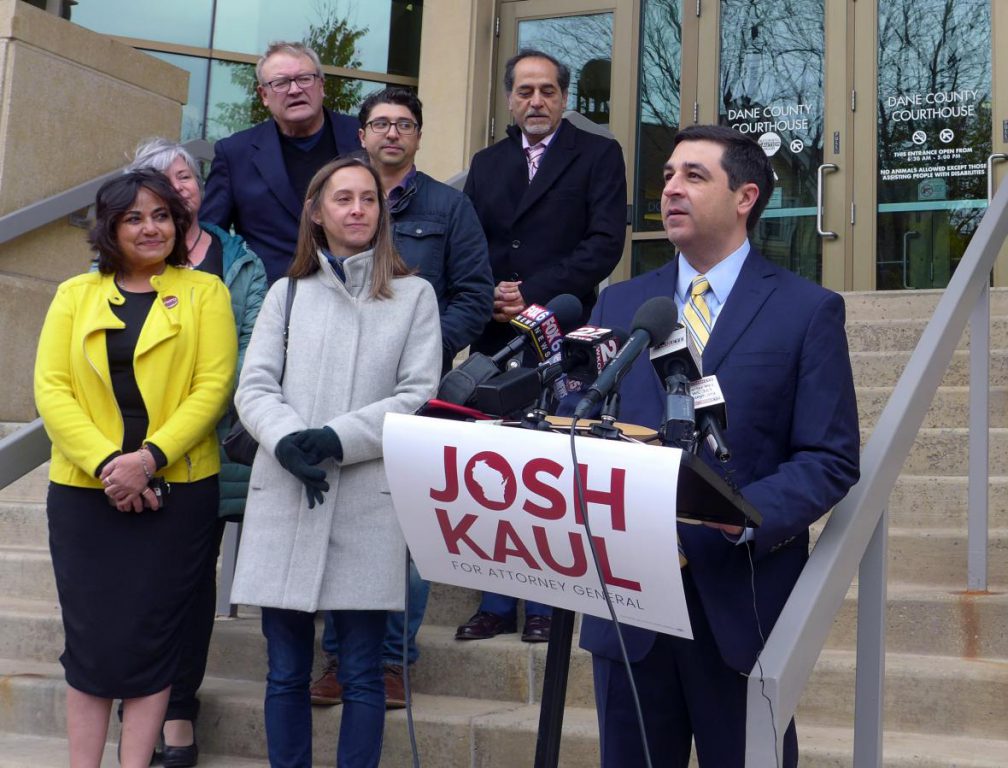 Democrat Josh Kaul is claiming victory in an extremely tight race for Wisconsin attorney general. At a press conference in Madison Wednesday, Kaul said that while the election was close, the “results” are clear”.

His opponent, Republican incumbent Attorney General Brad Schimel, seemed to acknowledge Wednesday that initial vote numbers were not in his favor but stopped short of conceding.

“I just got off the phone with Josh Kaul. While the results are not final, it appears he has won this race,” Schimel said in a statement.  “I told him I am waiting until the municipal and county canvasses are complete, all military ballots are accounted for and that every vote is counted. We also want to know more about what happened with the absentee ballots in Milwaukee County.”

As of 9:45 a.m. Wednesday, the Associated Press had not called the race but showed Kaul leading 49.54 percent to Schimel’s 48.68 percent.

During his remarks Wednesday, Kaul thanked voters and praised Schimel for what he called a “spirited campaign.” He also looked ahead toward what he said he hoped to accomplish as attorney general.

“I’ll work with the Legislature and governor to increase the testing times at our state crime labs,” Kaul said. “We’re also going to start responding to our opioid epidemic like the crisis it is.”

Schimel said he had no regrets, including spending on commemorative coins.

“I’d make more of those coins so I could make sure every law enforcement officer in Wisconsin had one,” Schimel told cheering supporters Tuesday night at the Ingleside Hotel in Pewaukee before sending them home.

Polls showed the race narrowing as the election neared with Kaul, a former federal prosecutor, making his first run for office against Schimel, a longtime district attorney for Waukesha County who was elected attorney general in 2014.

As in other state and national races, health care was a major point of contention. Specifically whether pre-existing conditions protected under the Affordable Care Act would be struck down by the courts. Schimel is leading a 20-state lawsuit against the ACA, which Kaul and other state Democrats have said would remove protections for pre-existing conditions along with other provisions in the federal health care law.

The two also disagreed over the state’s involvement in other federal lawsuits which Schimel described as federal overreach. In 2015, Schimel joined a lawsuit opposing new U.S. Environmental Protection Agency regulations that would limit carbon emissions from power plants. During the campaign, 45 former assistant state attorneys general from both parties signed a letter criticizing Schimel for politicizing the office.

Schimel enjoyed strong support from law enforcement but was criticized by Kaul for plea deals for some child sex offenders he made when he was a prosecutor in Waukesha County.

After the school shooting in Parkland, Florida, Schimel — who was endorsed by the National Rifle Association — announced a program to distribute $100 million in school safety grants.