High School cancels “Mockingbird” even as it gets performed and lionized nationally. 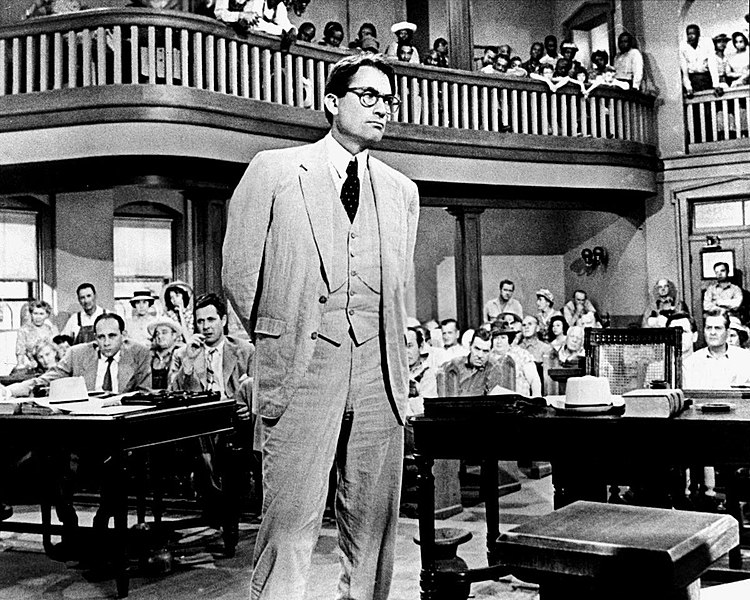 Gregory Peck publicity photo for the film To Kill a Mockingbird, 1962

The Shorewood School District recently capitulated to a handful of self-absorbed students and parents by canceling a theatrical adaption of the famed novel To Kill A Mockingbird. That pathetic grovel to political correctness taught students all the wrong lessons.

In a can’t-make-it-up comment, the district’s superintendent of schools said the play would not be performed to safeguard the “mental and emotional health of our entire student body…”

Consider then the trauma that might ripple through the school when it learns that a “demographically diverse national survey of 7,200 Americans” selected by — steady yourself — PBS has voted the Harper Lee classic as “America’s favorite novel.”

There’s more. According to the Associated Press, “joining (PBS host Meredith Vieira) to sing the book’s praises was writer Aaron Sorkin, whose adaptation of Mockingbird starts Broadway previews this month, and cast members. Sorkin (known for writing “The West Wing” TV show and the movie, The Social Network) said reading Lee’s novel was his first brush with ‘astonishing writing.’”

Said Sorkin (whose “West Wing” was revered on the left): “There is soul-crushing injustice in this book that still exists. And at the center, morality, decency and what it is to be a person strikes us.” Added LaTanya Richardson Jackson, who portrays Calpurnia in the Sorkin play: “I was most impressed that a woman wrote that way” during the waning days of Jim Crow America.

PBS’s Vieira expressed “no surprise at all that Americans chose ‘To Kill a Mockingbird’ as their best-loved novel. It is a personal favorite of mine – one that truly opened my eyes to a world outside of my own. Harper Lee’s iconic work of literature is cherished for its resonance, its life lessons and its impact on one’s own moral compass.”

As a former Shorewood resident, I watched the village’s transition from a Republican stronghold to a dark blue, Berkeley-like bastion of identity politics. As that unfolded, the high school’s nationally recognized theater program remained one of the community’s strongest assets. Perhaps it was inevitable that the program would fall victim.

It’s some consolation if a tad ironic that, in the same month that Shorewood’s education leaders failed in their most basic mission, PBS followers and a leading Broadway producer have put Harper Lee’s classic novel on a pedestal.