A Marquette professor who grew up in Pittsburgh and attended the synagogue school reflects on the shootings.

By Andrea Kupfer Schneider - Oct 30th, 2018 04:28 pm
Get a daily rundown of the top stories on Urban Milwaukee 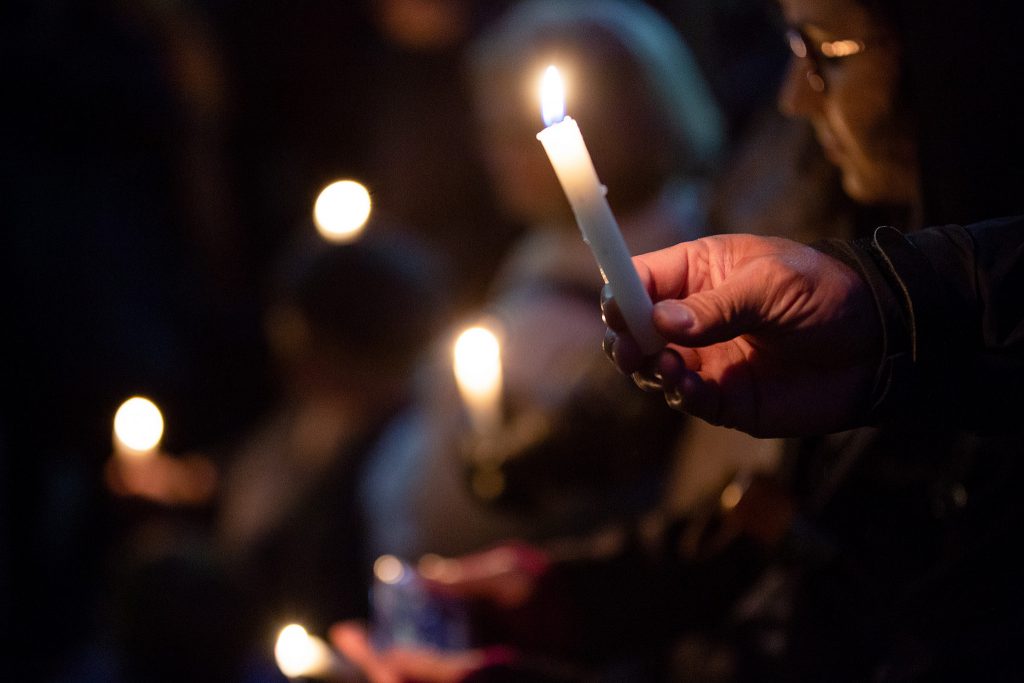 Vigil for the victims of the Pittsburgh synagogue shooting. Photo by Governor Tom Wolf from Harrisburg, PA [CC BY 2.0 (https://creativecommons.org/licenses/by/2.0)], via Wikimedia Commons

I thought that teaching the Kavanaugh hearings in a careful and respectful manner a few weeks ago would be the biggest teaching challenge of the semester. I was wrong.This weekend, as you have all no doubt heard, a gunman with a history of anti-Semitic rants and far too many legally acquired guns in his possession, entered a synagogue and killed 11 people there in the middle of Saturday morning prayers.Tree of Life is a synagogue in the heart of the Squirrel Hill neighborhood in Pittsburgh. This is my home. I went to Hebrew School at Tree of Life, my mom was a teacher there—it is one of several synagogues in this neighborhood that we have belonged to over the years and those killed are parents, cousins, dear friends of our community—two learning disabled men, leaders of the synagogue, the list is too painful. As the newspapers have noted, Squirrel Hill has been a Jewish enclave in Pittsburgh for years but that also misses the point of its diversity. My high school, Taylor Allderdice, had a mixed population of Jews and non-Jews; African-Americans, Hispanics, Asian-Americans, and whites; rich, middle-class, and working-class—it was a wonderful microcosm of the larger world. The location of the interfaith vigil held on Saturday night is a sign of the neighborhood mix—in the church at the corner of the heart of the neighborhood, across from the Jewish Community Center, near the Jewish Home where my grandmother spent her last years, and next to the Episcopal school, St. Edmunds, where my brother went to grade school. You get the picture.

And now I have to stand up and ask how this happened. How this mix of hate and racism and nationalism and lack of gun control turned into the worst anti-Semitic attack in U.S. history. I can’t even write this without tearing up. I was shaking from nervousness when talking about Kavanaugh. How do I explain Saturday’s events? How do we remind our students that older adults did not grow up with this violence?  That we actually could go to the movies without worrying about getting shot? That active shooter drills for school children is not normal? And that going to your house of worship—a synagogue, a church, a mosque, a Sikh temple—should not be life threatening? My mom, also a professor, is in the midst of teaching the Holocaust to students who assumed, incorrectly, that the hate unleashed in the 1930’s had been safely put to bed. A writer at the New Yorker put it this way—

They are the toxic politics of the President, and the racist, nationalist fervor that has been inflamed by his rise, and the success and the militancy of the gun lobby, which for decades has refused to acknowledge the obvious: that one way to have fewer killings is to make it harder for Americans to possess guns. Each of these is a national crisis on its own.

So, as a professor of dispute resolution, ethics, international conflict—what do I say to our students?  That the “A” in ADR can also mean activism? That as lawyers they have a special responsibility for the future of the justice system? That they will be in positions of power to prosecute and to defend…and to draft legislation that could change this calculus? That, as young people, they have an even greater reason to invest in the future?

I have stopped pretending to be neutral—pretending that saying  there are “good people on both sides” and that “I’m a nationalist” do not have consequences. That allowing candidates who espouse racist, anti-Semitic, or homophobic hate to run under a party’s banner without denouncing and de-funding these candidates does not perpetuate the mistaken belief that their beliefs are just a fringe. And that sending thoughts and prayers are enough—the people killed on Saturday were already praying. This shooter went after the synagogue because, in particular, it had promoted national refugee Shabbat last month. This is the height of empathy—promoting others’ welfare because one remembers what it was like to be a refugee. This attack is on all of us with differences—in religion, in race, in ethnicity, in anything—and in complete ignorance and in total denial of what makes America great. Enough. So in addition to all of the above I will also tell students this: Vote next week as if your life depends on it—because it just might.

One thought on “Op Ed: Heartbroken in Pittsburgh”