One of his six American System-Built homes on Burnham. Quite a history. Quite a home. 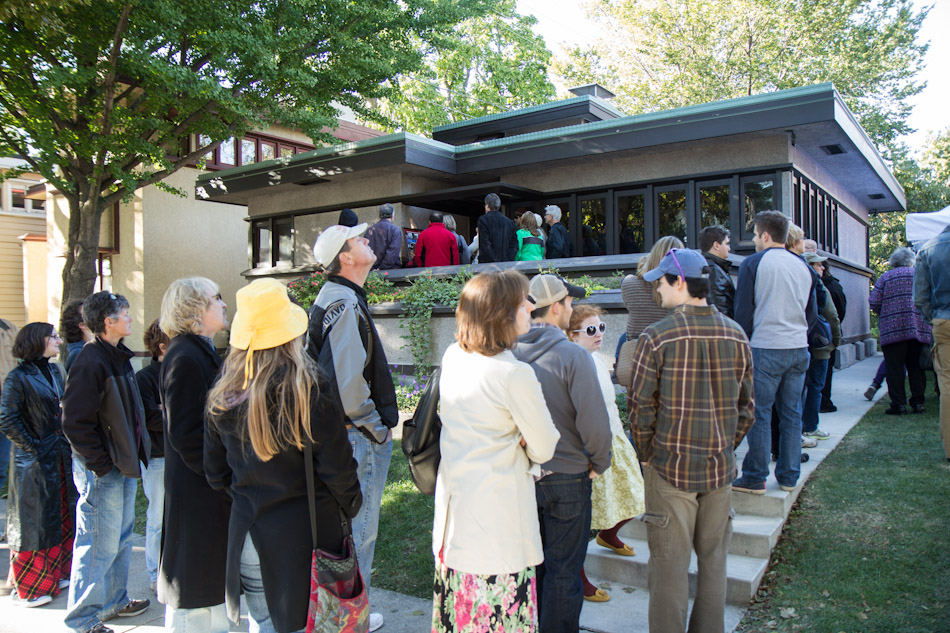 Wisconsin born architect Frank Lloyd Wright once said,  “I would rather solve the small house problem than build anything else I can think of.” The 960 drawings he did for some 30 models of the American System-Built homes is the largest entry in his archive, attesting to his interest in providing what we would today call affordable housing. Around 1911 he partnered with Arthur L. Richards of Milwaukee to create a pilot program of model houses, which could be marketed to building contractors around the country and the world. In 1915-16, six were built on what had been a celery farm in the 2700 block of what is now W. Burnham St.

The “system” behind the System-Built homes was explained by Wright in a 1916 lecture to a Chicago business group following the construction of these homes:

The idea back of the American System has been in my head for years … They are developed according to a principle. They grow from the inside out, just as trees or flowers grow. They have that integrity. …  I don’t want any mistakes about the new ‘System’.  These buildings are not in any sense the ready cut buildings we have all heard of where a little package of material is sold to be stuck together in any fashion. The American System™ Built House is not a ready cut house, but a house built by an organization, systematized in such a way that the result is guaranteed the fellow that buys the house.

Wright and Richards would provide kits with pre-cut elements for assembly by local crews, who would also handle the foundations and rough carpentry. Designs could be reversed, as some floorplans are here. Rather than having skilled tradesmen like finish carpenters travel to a job site, perhaps in uncertain weather, these elements could be built in factories and then shipped. There were some shrewd economic considerations behind the project. The profits would be modest, but there was a potential market for millions of such modest homes. Henry Ford sought the same clientele for his working class Model T, and he did okay.

Regrettably, the system was a failure for its proponents, including Wright and Richards. The Great War intervened, diverting resources and labor away from domestic housing and into the war effort. Little housing of any sort was built for years. The affordable housing problem only got worse, and the System-Built houses never reached the potential envisioned by its promoters. This cluster of six prototypes in the Milwaukee working class neighborhood of Burnham Park is the largest grouping ever built. Scattered others remain in Illinois, Indiana and Iowa.

To encounter these six System-Built homes in their early 20th Century working-class neighborhood provides an architectural contrast perhaps unrivaled in any such American neighborhood. This area, about four miles southwest of City Hall, is largely built on the city grid, with a few diagonal streets thrown in to disorient visitors. As the homes’ 1985 nomination for inclusion in The National Register of Historic Places notes:

The American System-Built Home models were a radical concept when built and continue to be so today when contrasted with the surrounding modest Milwaukee bungaloid elements of the neighborhood.

The first sign that there is something unusual to come when entering the neighborhood is in white letters on a brown background, reading “Frank Lloyd Wright Designed Buildings American Systems Built Homes.” As one passes through the bungaloid surroundings, the rhythm of these buildings is arresting, as are their immaculate proportions and unfussy detailing. Note how the homes float on their foundations, with the regular interruption of the basement windows giving the element a toothy appearance. This is Wright on target. Here, on small lots of about 2,800-square feet, the homes with their regular setbacks and three-foot-by-three-foot modular designs, provide a cubist relief to their more conventional, and mostly banal, neighbors.

Unlike Wright’s later, more elaborate work, these simple homes did not require acres of land for their siting and execution, or the need to be constructed spanning a waterfall. Nor would they require a site inspection by the great architect before he would put his pen to the drawing board. A simple lot on a featureless city street in an urban district would be just fine.

A Decline after a Rough Start

It was not until 1920, with the war over, that Richards was able to unload his inventory of homes to buyers. This particular home has had relatively stable ownership and has undergone fewer changes than its neighbors, although all are remarkably intact. On July 21st, 1939 a permit was issued to enclose the front porch at a cost of $500. In 1964 F. E. Martin bought the home for $11,000, taking out a $4,500 mortgage.

Martin may have used the home as a rental property. Just 18 months after he bought the place, he offered it for sale at $13,900, choosing T. Czlapicki of All-Star Realty to handle the sale. The advertisement made no mention of Frank Lloyd Wright’s association with the building. The only note mentioned the 1939 screen porch. On April 29th, 1968, with the home still apparently on the market, Hammel of the city Assessor’s office dropped by for an inspection. “Ext. Fair to Good Cond.,” he wrote, adding, “Designed by Frank Lloyd Wright (obs. design).”

Obsolete designed buildings in fair to good condition are not favored by assessors, who prefer things functional, up-to-date and in exemplary condition. The homes were getting a bit worn.

On April 14th, 1971 Martin found a buyer in Norman Gabrielson, who paid $12,500 for this home, which he was to occupy for over four decades. Gabrielson had never heard of Frank Lloyd Wright.

By 1998 interest in Milwaukee’s architectural history and its connection with the legacy of Frank Lloyd Wright attracted the attention of the UW-Milwaukee School of Architecture and Urban Planning.

In an excellent example of the “Wisconsin Idea,” in which the interest of the University System extends to the entire community, a team of students and professors conducted real world field study to document, inventory — and ultimately preserve the System-Built homes. In a Milwaukee Journal Sentinel article of February 2nd, 1998 headlined “UWM Project a fine way to save Wright’s urban legacy,” then-reporter Whitney Gould paid a visit to the home and its owner, writing:

Norman Gabrielson, a feisty 73-year old, owns … an intact single-family cottage that he’s not interested in selling. But he welcomes the UWM team’s offer of assistance. When he bought the seven-room house 35 years ago, attracted by its cozy spaces and lustrous rock-hard gumwood trim, he had never heard of Frank Lloyd Wright. ‘Now,’ Gabrielson says, ‘I think that guy was pretty smart.’

The team included Matt Jarosz, who authored the study report on the project. Today, Jarosz is Director of the school’s Historic Preservation Institute, and staffs the Historic Third Ward Architectural Review Board. Speaking of the UWM partnership with the Wright preservation in a Business Journal article of April 29, 2005 by Peg Masterson Edquist, Jarosz said, “The idea is to get beyond the textbook and lecture environment of the classroom.”

As awareness of the importance of the structures was raised, and with private support including from Robert Elsner, owner of the Bogk House (House Confidential: “An ‘Extraordinary’ Frank Lloyd Wright Masterpiece” Urban Milwaukee, August 31st, 2016), an offer was made to purchase and preserve the home.

Reporter Gould was there, reporting on December 4th, 2004 in an article headlined, “Preservation group buys house to renovate and connect city to architect.” Again, she quoted the once-feisty Gabrielson, who had hardened by his eighties into “flinty,” in the writer’s estimation:

Forty years ago, when he bought the little stucco house … Norman Gabrielson knew nothing about the architect. ‘I bought it because it was built so nice,’ the flinty 80-year old recalls. ‘Big sunroom, skylight, lots of window. Fireplace in the middle of the house.'”

Gould also offered a comment about Wright’s houses from Elsner: “If they’re not restored, they’re going to go.”

Today the home is owned by the Frank Lloyd Wright Wisconsin Heritage Tourism Program, Inc., a Madison-based organization dedicated to the architect’s legacy. Model “B’ is open to the public for tours, and is an especially popular destination at the annual Doors Open. The tours last about 45 minutes and are led by trained docents. (See information below). Other homes are in varying states of occupancy and restoration. The homes are easily visible from the street, and it is interesting to watch the expression on the faces of those drivers, stopped at the traffic light at the corner, and unfamiliar with the territory, as they recognize the hand behind these once-failed masterpieces that could have transformed worker housing worldwide, were it not for the disruption of war. Thanks for nothing, Kaiser Wilhelm and your Axis cohorts!

The Assessor’s office has only a few terms it uses to describe, in shorthand, the many building styles in the city. There is even a category called “Mansion.” However, it is somewhat disconcerting to find this radically modern home described as  “a 1.0 Story Residence Old Style,” even if it has been around for over a century. 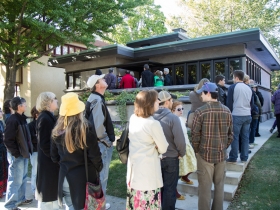 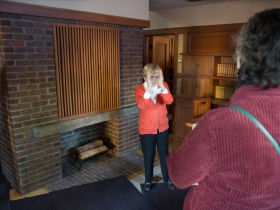 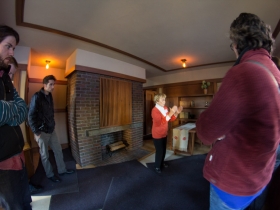 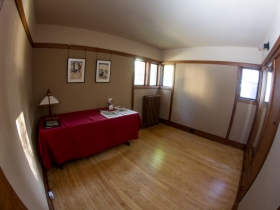 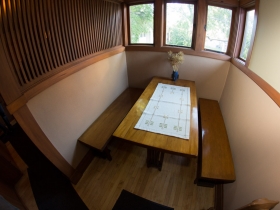 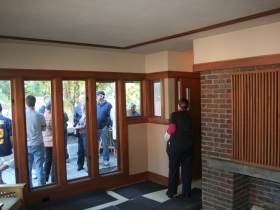 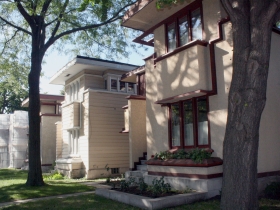 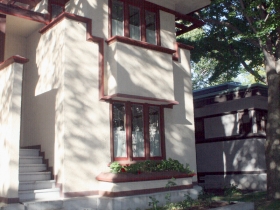 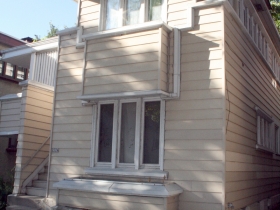 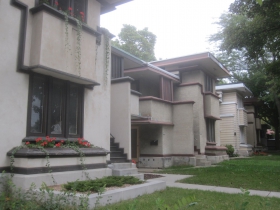 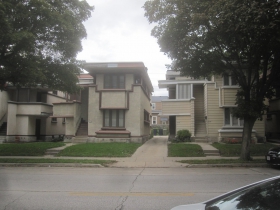 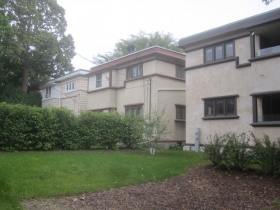