Let’s Talk About the American Dream 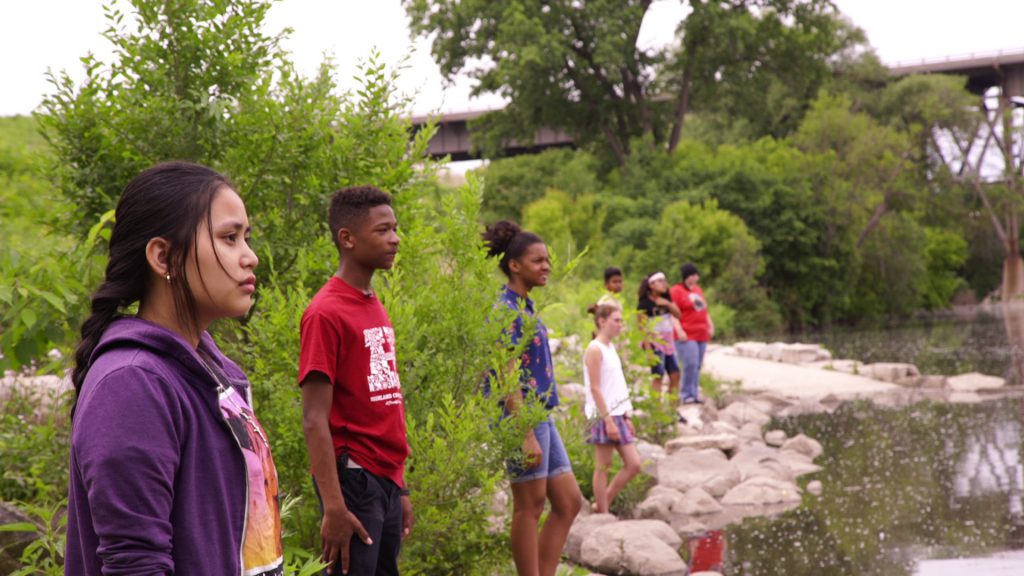 Despite their struggles, however, many young people are empathetic, community-minded and cautiously optimistic about the future.

In her video exhibit “(Re)Housing the American Dream: Freedom Principles,” on display through January 27 at Haggerty Museum of Art on the Marquette University campus, artist Kirsten Leenaars documents two groups of students from Milwaukee schools and their insights on freedom, activism, politics and housing in America.

“(Re)Housing” features diverse ethnic groups of students from Milwaukee’s Highland Community School and The Newcomer Center in the Milwaukee Academy of Chinese Language. The exhibit follows students through summer camps over three years, beginning in 2016 when they were 11-12 years old.

“I thought it would be amazing if these two groups would come together,” said Leenaars during a recent telephone interview.

Leenaars, a native of the Netherlands, creates artwork that is largely community-based. She originally used photography as a medium, but after moving to the United States in 2005 and attending the University of Illinois, discovered she preferred working with video. Leenaars is an assistant professor of contemporary practices at the School of the Art Institute in Chicago.

Seeking more involvement in the Milwaukee community, the Haggerty Museum commissioned the artist to do the exhibit in 2015.

“(Re)Housing” consists of eight videos on five monitors, including “Freedom Principles,” a three-channel video on a large monitor that acts as a culmination of three summers of work on the project.

A series of thought-provoking questions regarding freedom — What does freedom mean to you? What does freedom look, feel and sound like? What does it mean to have a voice? What do you stand for? How do you take action? — are painted in black and white on one of the exhibit walls.

Many answers were surprisingly insightful and eloquent.

Students express their thoughts on gun control (“With stricter gun laws, kids are able to feel safer in school,”) Donald Trump (“Everybody knows he lies”; “What the heck goes on in that man’s head?”) the American Dream (“America is not like everyone says. There are lots of problems here like everywhere else”) and their future goals (“To buy a good house and be a good citizen.”)

Segregation and violence in Milwaukee, and issues of gentrification and adequate housing, are also discussed, with some saying the city is only safe “for some people,” and the U.S. government should dedicate its resources to eradicating homelessness and ensuring sufficient housing for all.

The students’ candidness in the interviews is quietly commanding and sobering. African-American teens recall experiencing racism in stores and restaurants; a Ugandan student shares how she felt safer in America than in her native country, where a 5 p.m. curfew was imposed due to violent activities. A Thai girl equates freedom to “playing in the mud” and enjoying fresh air.

Students are shown participating in many community-building activities: They build a radio tower out of cardboard to represent a way voices can be amplified and stand front of the 16th St. Viaduct, the site of protests for fair housing rights in the 1960s, holding cardboard letters that read “We the People” both backward and forward.

As a way of expressing themselves, students dance in Kosciuszko Park, and hold up handmade signs while they march up and down the street chanting “No more violence!” and “Peace on earth!”

In these videos, voices often overlap, perhaps to emphasize that, in the name of equality, one should not drown out another. Ambient music blends in with spoken words, giving the film a dreamy quality at times. The words “We the People” are frequently echoed by the students.

Leenaars uses simple backdrops in her work. In the 2018 video ‘What a F What a F What a F What a Freedom,” filmed this past summer at Marquette’s Helfaer Theatre, a plain black background gives a somber tone to the interviews. 2016’s “New and Improved” features kids doing fake informercials to promote their dream homes against cheerful magenta and white checks. Lime green is also used—a bright color to capture the students’ positive thoughts towards the future.

“It’s a really complex and multifaceted project,” says Emilia Layden, Haggerty Curator of Collections and Exhibitions. “It started off as an experiment, and we are really happy with the results.”

Too often, older generations tend to judge younger ones harshly or condescend to them. Leenaars’ eye-opening project demonstrates how perceptive kids can be. These children are future voters, lawmakers, educators, and scientists. Listening to them, without prejudice, may surprise you.