Milwaukee leads nation in reclaiming water, but rise in extreme rains a challenge. 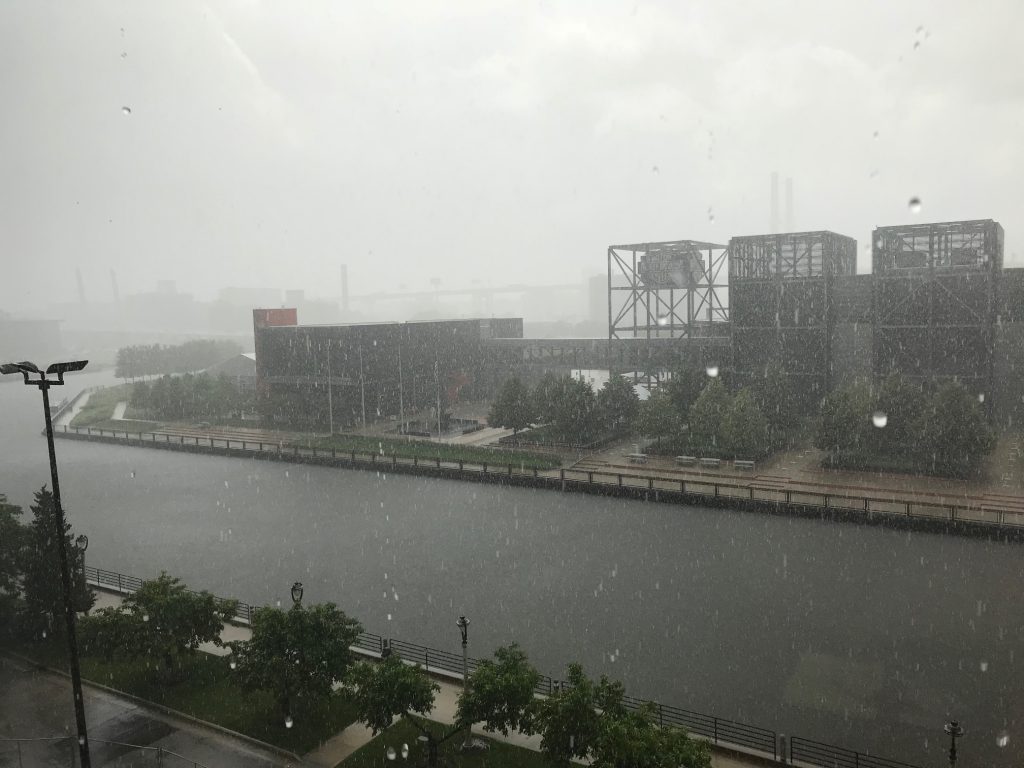 Looking out the windows at MMSD headquarters during a downpour that resulted in the first combined sewer overflow of 2018. Photo courtesy of MMSD.

Milwaukee Metropolitan Sewerage District Executive Director Kevin Shafer was sitting high and dry, without a bit of bad news or drastic rain storms, for quite a while.

“Until this June, we’d gone 22 months without an overflow,” he says

An overflow occurs when the MMSD’s Deep Tunnel — all 521 million gallons of its massive capacity — gets so filled with storm water and sewage that the system must let some of that polluted water overflow into the rivers, which eventually flow into Lake Michigan.

Back before the Deep Tunnel was built and came on line in 1993, Milwaukee averaged 50 to 60 overflows a year. Since then the average has been just 2.3 per year. 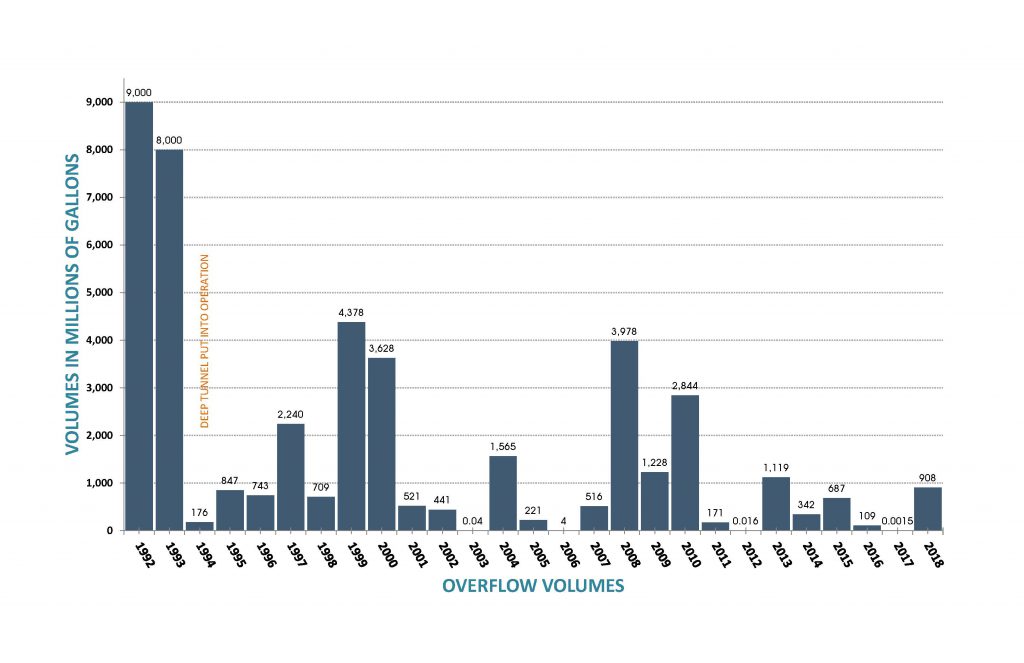 The Deep Tunnel, along with many improvements Shafer has since added,  has allowed the MMSD to compile a remarkable record: at least 98 percent of all storm water and sewage gets cleaned by the sewage system before being allowed to flow back into the Milwaukee watershed. That figure is far higher than the 85 percent figure required by the federal government, and is the highest rate of water reclamation of any of the 700 combined sewer and stormwater systems in the United States. (Nearly every American city used combined storm and sewer until the 1940s.)

And so the record stood until this year, 2018, a freakish year of almost biblical rain storms.

“We are really seeing more intense storms,” Shafer says. “We’ve had six combined sewer overflows this year, all since June.”

Usually the toughest, rainiest months are in the spring, but this year the late summer has been hellish.

“From Aug 20 to the first week of September, we had six inches of rain. And it’s been back to back to back, so it’s a hard thing to manage. And more rain is coming next week.” 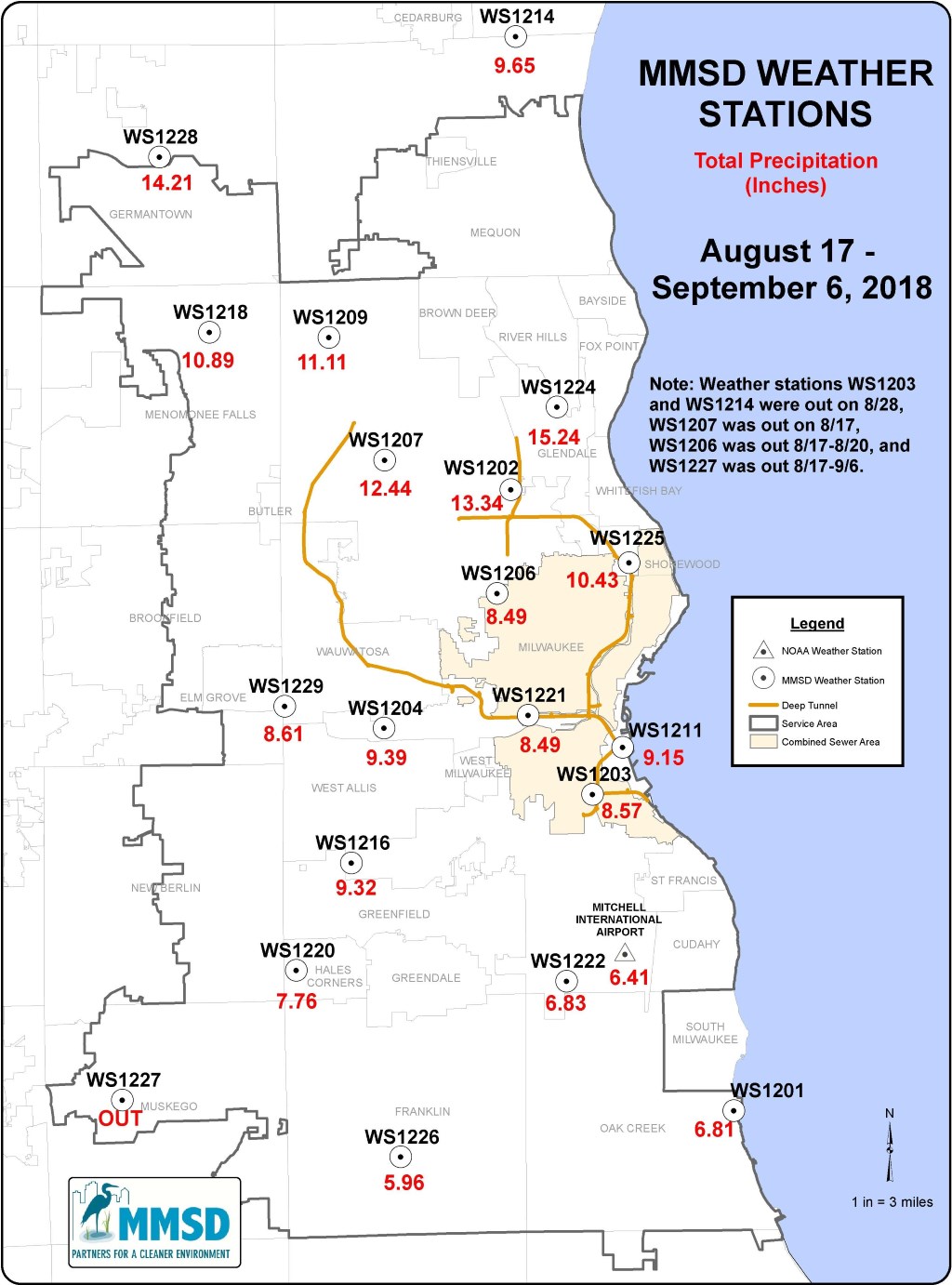 But that’s just the average. Those six inches of rain fell far harder in some areas, drenching the Fox Point and Glendale area with nearly 16 inches of rain, while the south suburbs got fewer than six inches.

All that rain has left everything so saturated, all the land and streams in the district, that next week’s rain, if it comes, could be very difficult to absorb. It could result in another overflow.

Shafer has been executive director since 2002 and one of the early decisions he made is to personally handle when to allow an overflow to occur. The old system automatically triggered an overflow during rainstorms when the Deep Tunnel neared the half-way-full point. Now he monitors it closely, late into the night if needed and has allowed the tunnel to fill as high as 89 percent of capacity. This remarkably hands-on style of management has resulted in fewer overflows.

-Building two new deep tunnel additions that increased its capacity from 405 million gallons to today’s 521 million. One segment is seven miles long extending north under the Menomonee River from the County Grounds. The other is two miles long extending under 27th St. from Hampton to Mill Road.

-Buying hundreds of homes and businesses in flood plains along the rivers and turning this into green space that absorbs water.

-Overseeing the gradual creation of more and more green infrastructure: green roofs, porous pavement, rain barrels and bio-swales that together absorb 40 million gallons of stormwater, preventing it from entering the storm and sewer system. A bio-swale on a city boulevard, for instance, lowers the boulevard’s landscape to a level below the street, so water flows into the landscape rather than flushing into sewers.

-Adding 3,800 acres of green seams within the MMSD district, which absorb storm water but also create green spaces and parkland to break up the urban landscape.

“The MMSD is one of the elite agencies in the country,” says Adam Krantz, CEO of The National Association of Clean Water Agencies. “We represent 320 wastewater treatment facility plants and they look to Kevin Shafer as the gold standard. He just does an amazing job.”

Cam Davis, who served as senior advisor on the Great Lakes for the U.S. EPA under President Barack Obama, marvels at what the MMSD has accomplished. “The MMSD is one of the leading water reclamation agencies in the country, if not the world, in terms of forward thinking on green infrastructure.”

Oh yes, today’s term for sewerage plants is the far less nasty sounding water reclamation plants, and the MMSD has two of them, one at Jones Island and one in Oak Creek.

And Shafer says he is in great demand to talk about the MMSD’s acclaimed approach to water reclamation. “I could probably go somewhere every day of the week to give a talk on this,” he says.

Shafer is now pushing all 28 municipalities to pass laws requiring new green infrastructure be installed for any new development that adds more than 5,000 square feet of impervious area.

The City of Milwaukee, he notes, has already adopted this and other green policy initiatives. “They’ve been a real leader on this.”

But for all the improvements Shafer has made, the impact of climate change has retarded his progress. The data, he says, shows an increase in high intensity rain storms since 2000. “So it’s kind of a moving target to manage the water because the climate has changed so much.”

Which means more nights for Shaffer babysitting the system to wait until absolutely necessary, until the last possible minute, to allow an overflow.