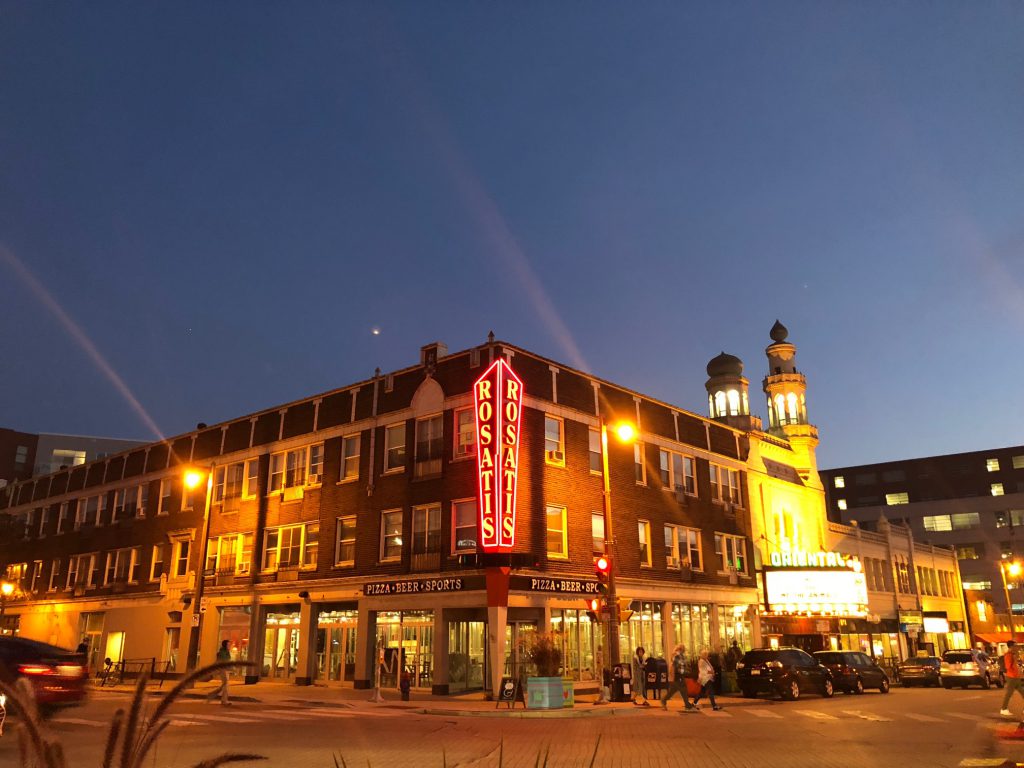 A new food hall concept was originally planned to open in October in the former Rosati’s space at 2238 N. Farwell Ave., but is now slated to open in early-to-mid-November.

The food hall, called Crossroads Collective, is still under construction. Owner Tim Gokhman cites a brief issue concerning beer lines as a partial reason for the delay. He says it will take four weeks after everything is finalized to open. Following a series of soft-openings, Gokhman expects the grand opening will take place sometime during the first or second week of November. Justin Carlisle and Dan Frame are also involved in the project, through their business, Cordial Consulting. Korb + Associates Architects designed the soon to be open food hall.

At a public meeting on September 26, Gokhman and Ald. Nik Kovac outlined the plans for the space and answered questions from neighbors, some concerning the “umbrella” tavern license. Gokhman began by giving a brief description of the food hall and how he hit on the idea to open one in Milwaukee.

Gokhman, who also owns and operates New Land Enterprises, says Crossroads Collective will reflect the “evolution of mall food courts.” While most of his research on food halls was done in Chicago, Gokhman also drew inspiration from cities such as New York, Montreal and Amsterdam. When asked how the food hall compares to Chicago’s Eataly and downtown’s Public Market, Gokhman said there was “some overlap,” but that Crossroads Collective still remains unique.

One new component at the East Side food hall will be a shared kitchen, which contrasts to the individual kitchens at other food halls and markets. The expansive kitchen remains in the same spot it was located while Rosati’s was open. The sheer size was at first a predicament for Gokhman, as he was unsure of how to efficiently utilize the space. He even considered demolishing the kitchen completely, especially after Sprint made a generous offer to transform it into a store. But Gokhman ultimately decided to keep the kitchen and instead searched for an establishment that required that much room.

With stalls for eight vendors, the robust kitchen is well-suited for Crossroads Collective. Twenty-five feet of exhaust line will be divided in five, creating intensive prep areas for food to be cooked. Three non-intensive prep areas will also be available. Gokhman emphasizes that there will be room for all eight vendors to prepare food at once, and there will not be any competition when it comes to cook time. An additional freezer will be converted to cool storage, with one freezer chest available. According to Gokhman, only one vendor said they needed freezer storage. The vendor in question will be serving ice cream, while the remaining vendors will be using fresh ingredients. In order to keep prep and serving time to a minimum, Gokhman says there will most likely be batched cooking, with vendors left to assemble food to order. He says food may be cooked to order when business is slower, but that the technique creates too long of a serving time to be used throughout the entire day.

Five out of the eight vendors have been finalized. Among them are startup companies, food trucks and restaurants with satellite vendors. Gokhman remained coy and chose not to name anyone, but did say there will be two “sweet” vendors, a soup & sandwich concept, tacos, and a vendor serving empanadas and arepas. Kovac asked if the empanada and arepa vendor was “the food truck,” but Gokhman declined to confirm this. Gokhman also hopes to find a mediterranean concept suitable for the space.

Crossroads Collective initially had a “wish list” of vendors. The goal was to maintain variety while still “[finding] a balance to let vendors just do.” To prevent repetition, all menu items require approval from New Land Enterprises, and all vendors are locally owned and sourced. Two companies have already been turned down. A beer company had too much of a “chain feel,” and another concept was too similar to Freshfin Poke, according to Gokhman.

“Not only do we not want overlay at the food hall, but also in the area,” says Gokhman.

“You mean we don’t need another poke place on the East Side?” Ald. Kovac quips.

Meeting attendees also raised questions of how alcohol will be served on the premises. Gokhman maintained that the food hall will be “very high end” and will have strict ID-ing and bartender training. As part of a new protocol surrounding tavern licenses, Gokhman was previously required to meet with a Milwaukee Police officer. Gokhman met with Officer John Klein to discuss any potential safety risks the new establishment might bring to the area through alcohol sales, and Klein saw no problems. “There’s no worry about underage drinking,” says Officer Klein. “We’re not getting that type of vibe from this place. There’s no concerns on the Police Department end of this at all.”

While there may be some type of happy-hour in the future, the food hall will not typically have food or drink specials. There will be a full bar inside the main food hall. While Gokhman guesses there’s room for 10 to 12 tap lines, he also said that decision is up to Frame, who was not present at the meeting. The application requesting community support of a liquor license for the premises states there will be six taps, along with wine, liquor and beer bottles. Inside the food hall, alcohol will only be sold at the main bar, and vendors will not sell any alcoholic drinks individually.

The main food hall bar will not, however, be the only place on the premises to purchase alcohol. The space will also be shared with a speakeasy. The smaller bar area will be mostly separated from the rest of the space, and will be accessible through an entrance in Black Cat Alley. The speakeasy will specialize in high end craft cocktails, and will have room for about 18 patrons.

As with the food, the decor at Crossroads Collective has local roots. The food hall will be adorned with some original items salvaged from Oriental Drugs, the building’s original occupant until it closed in 1995. Area street artist Stacey Williams-Ng is also curating a number of murals inside the food hall. Williams-Ng is the director of Wallpapered City, LLC, the company behind the Black Cat Alley mural project.

Come spring, Gokhman also has plans to build patio seating facing E. Ivanhoe Pl. The patio will most likely be made of concrete and wood, and will be situated away from the building. The sidewalk will run between the patio and the building. Setting the patio away for the building allows for about an hour and a half more sunlight, according to Gokhman. When Gokhman is ready to move forward with patio construction, he will need to amend the lease with the Department of Public Works, according to Ald. Kovac. 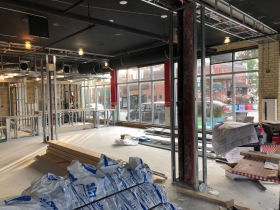 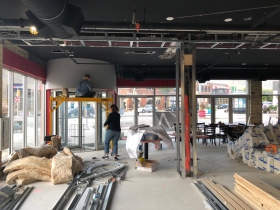 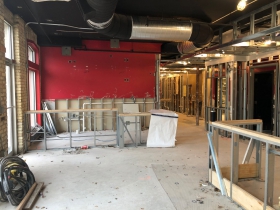 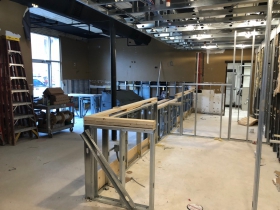 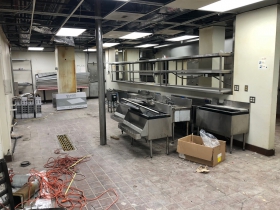 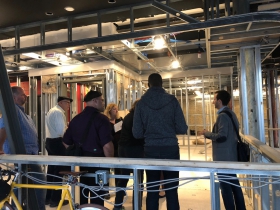 2 thoughts on “Dining: East Side Food Hall Opening in November”