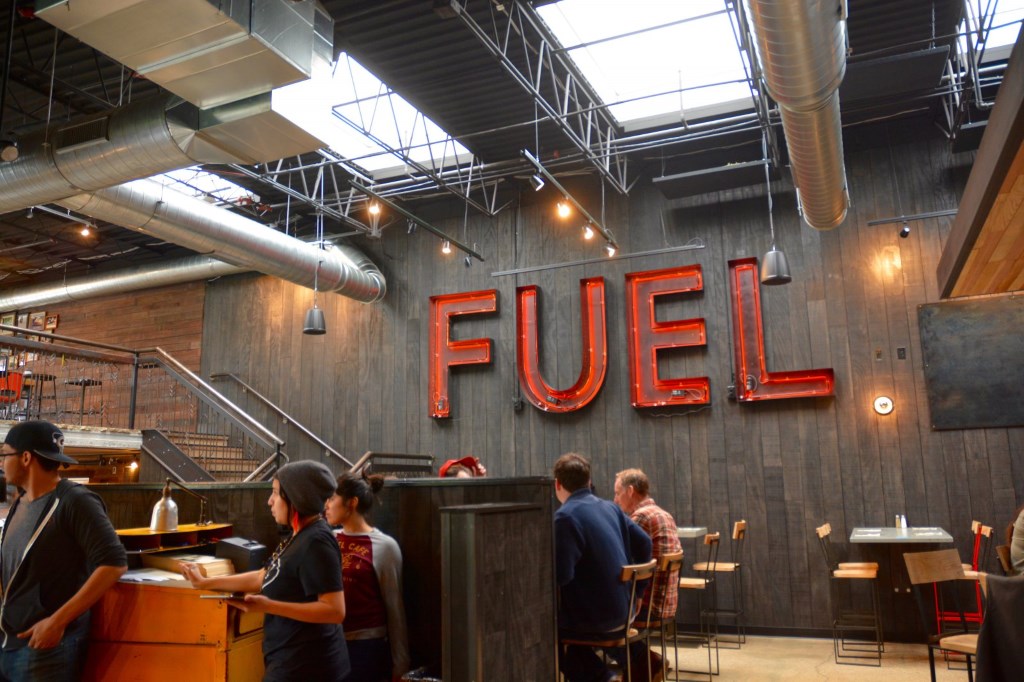 If you’ve been around Milwaukee’s East Side for a while, you are probably familiar with Fuel Café, just across the river on Center Street in Riverwest with its Bohemian vibe. Bohemian has been replaced in the Fuel Café in Walker’s Point by a motorcycle theme that’s on display everywhere you turn in this hip, urban cool restaurant with high ceilings and exposed duct work. The original is small, almost cozy, while the new Fuel occupies three rooms, if you count the second-floor mezzanine. A circular bar surrounded by high tops dominates the main dining room. Adjacent to that is a second dining room with several booths large enough to accommodate six or a tight eight.

The first time I came was on a Saturday, a busy Saturday, as it was the weekend of Mama Tried, a popular motorcycle show. This was not my plan! We walked into chaos, yet had excellent service, despite what must have been overwhelming demands on the kitchen staff and the front of the house.

We ordered from the Brunch Menu, served on weekends from 10 a.m. to 3 p.m. Both our dishes were eye pleasers as well as satisfying and unique brunch entrees. The Lathers, battered chicken breast, had melted mild cheddar on top, and underneath steamed spinach and béchamel sauce. I would have put the béchamel on top, but I wasn’t in charge. It came with a house-made jalapeno cheddar biscuit that needed butter, and hash browns that needed more time on the grill, or as my companion noted, “There’s a reason they call them hash browns.” The chicken however, was full of flavor from a crispy crust that kept it moist.

Johnny Cakes, served in a hot cast iron skillet, lived up to their description in the menu. This was a complex dish with two corn pancakes topped with steamed kale, two poached eggs, corn salsa, pico de gallo and a delicious chipotle crema sauce. The flavors from the sauces perked through the corn pancakes which might have been dry had they been served separately. Grilled corn in the corn salsa added pops of sweet to elevate every bite of this complicated dish.

On a second visit we had hits and one miss. I’ll get that Impossible Burger out of the way first. It’s not on the printed menu yet, so I asked our server about it and she said sure, you can order it if you wish. I had read somewhere that this vegetarian burger, new to Fuel, tasted exactly like a real hamburger. It didn’t. It was tough, bone dry, and lacked any hint of flavor. “It’s vegan, vegetarian, and gluten free. We get it from Sysco,” our server said after she went back to the kitchen to find out exactly what was in this so-called hamburger. After I suggested they might not want to put it on the menu because it came from a food distribution service, which meant it couldn’t be fixed, someone in charge took 10 percent off my bill. I did enjoy the accompanying salad with its tart mustard-shallot dressing and the lovely watermelon radish that added color and crunch.

The rest of the meal hit its stride with our three exceptional choices. The Trout Chowder served with French bread was thick enough to call it chowder, but not so thick you could eat it with your fork. The trout, locally sourced from Rushing Waters, infused the soup with wonderful smoky flavor.

From Starters, the Roasted Beets and Blue, served in a small, slightly warm cast iron skillet, were covered with candied walnuts. The combination of chunky beets, blue cheese, and candied walnuts, served all three of us, and left us wanting more.

The House Specialty, Chicken Pot Pie, came directly from the oven to the table. It had a soft cracker-like biscuit crust which enclosed chicken, carrots, green beans, lots of mushrooms and corn, all swimming in a spicy béchamel sauce. This was a lot of chicken pot pie for $11.00.

I wish I had noticed the single dessert at the bottom of the menu, Homemade Chocolate Tres Leche Cake, because I prefer not to miss any dessert that includes chocolate whipped cream, white chocolate and glazed strawberries.

Guess I’ll have to come back. 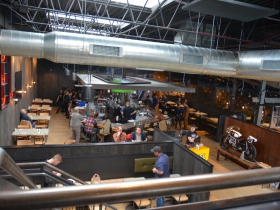 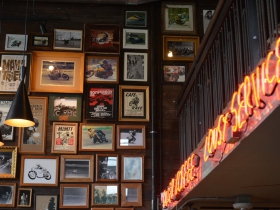 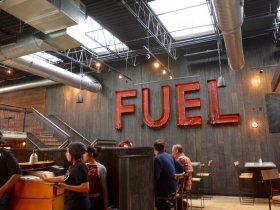 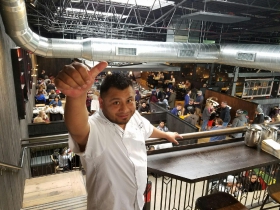 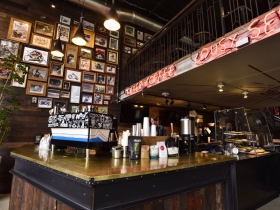 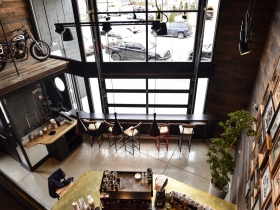 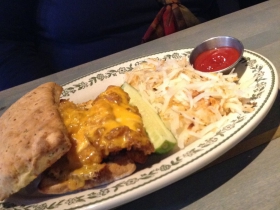 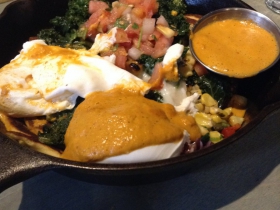 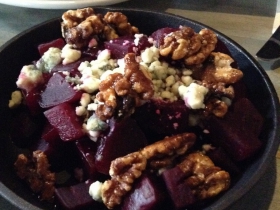 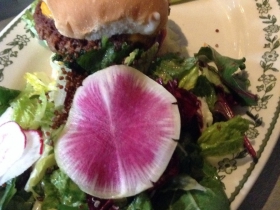 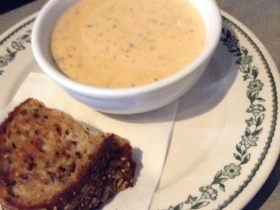 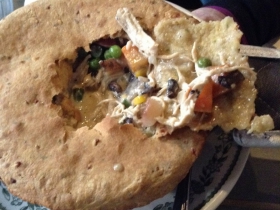 One thought on “Dining: Fuel Cafe Is a 5th St. Hangout”