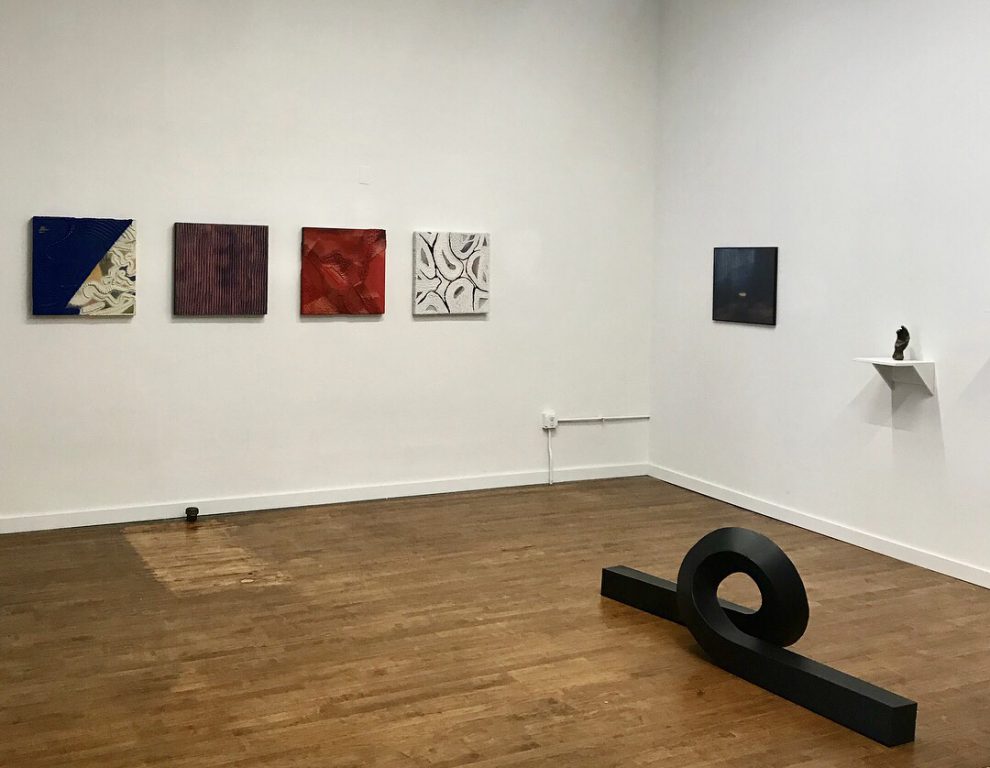 The U-shaped space of the Real Tinsel gallery on Historic Mitchell St. glowed and hummed with energy on the night of the opening reception for “Earthstopper,” as the new exhibition is entitled. Extended display windows span both sides of the entrance which showed visitors and artwork co-mingling in a slightly elevated diorama. It was fascinating to hear the traffic and life of Mitchell Street and simultaneously the sounds from the gallery intermixing.

As stated in the show’s description, “In the traditional practice of hunting, an ‘earthstopper’ was an individual who blocked the entrances to foxholes so that during a subsequent fox hunt, the animal wouldn’t have an escape route into the ground. In terms of folklore, the fox has a long history of magic and cunning associated with it.” This show consists of the work of nine women artists, all in their twenties, going through a transition. It feels like a pact of sorts for these young women to block the foxhole of self-doubt during a time of transition from home, school and family and venture into new realms of creation and discovery, using their own magic and cunning. The show was put together by first-time curator Rachel Horvath.

The cut paper and collage work of LaNia Sproles ripples and undulates with waves of monochrome colored, printed and patterned paper. In “Kindred,” portrait drawings of the artist’s friends are collaged into layered organic shapes forming a headless body which runs with golden limbs. Emma Ponath’s paintings are visceral and layered. Caulk is used to create patterns with an aboriginal intensity that are reminiscent of intestines or plowed farm fields. The texture is hidden or emphasized depending on the angle at which the spray paint is applied, creating plastic worlds of ambiguous space.

The mystical photo “Wayward” by Jenna Marti is built like an impressionist watercolor, with semi-transparent layers digitally dappled, a dark forest with a glowing halo suspended in silence which questions more than it answers. Two earthenware sculptures by Kelsey Parks called “Palms” are quietly powerful. One hand  is a quasi-glove and the other has teeth attached; both have a quality of aged relics found on the forest floor and a visceral intensity that suspends time. Horvath’s painting “SICKO MODE” combines acrylic, spray-paint, oil, powdered marble and cut paper into a swirl of energy which is embodied by the artist herself. The thick impasto is built like hills filled with pools of cool glazes in her own imagined landscape.

Ariana Vaeth’s painting reveals multiple layers and work sessions; she is talking to us through the paint, each mark a word. In “Girlfriend Therapy,” we get a glimpse into a private world of interaction through the beauty of color, pattern and mark. Jordin Alanis’ oil paintings combine forms that are on the edge of being nameable but remain abstract. In a piece called “Lover is a Location,” she tears the flatness of pop art up and suspends multiple layers of stylized paint splashes in a vacuous space. Molly Hassler’s semi-narrative quilts feel like visual diaries of life’s daily elements sensitively drawn with a single color of thread that fills a ramen noodle cup or floats in the form of a butterfly. The show is tied together by Emma Smith’s large black sculpture in the center of the gallery, which looks like a huge piece of charcoal stretched and looped once, or a giant twist tie about to tighten.

The variety of materials — and artists — in this show is intriguing. The pieces are worked, moved, played with and formed, which speaks of the struggles of their making, but also the triumph of their being. It remains to be seen if these artists become earth stoppers, but for now it’s fair to say the work makes you want to stop and look and consider what it says about your own place in this world.