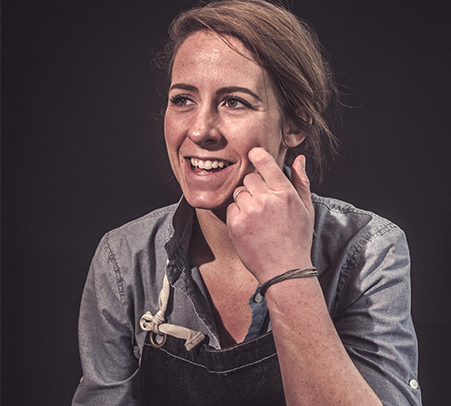 Five Milwaukee chefs are slated to be in an episode of a new Food Network show called “Bite Club” later this month.

The show, hosted by Tyler Florence, features five of the best chefs from a given city around the nation with each episode. The chefs compete in a cook-off with ingredients that are kept secret to them until the time of the event. On September 27, the show will feature five chefs from Milwaukee, including Caitlin Cullen of The Tandem, Barkha Limbu Daily of the cheel, Aaron Patin of Iron Gate BBQ Co., Matt Kerley of Bodegon and Hotel Madrid, and Frankie Sanchez Sabrosa Café and Gallery.

Before the competition begins, the chefs participate in an entertaining game of chance, during which two of the chefs are deemed judges for the episode. The three remaining chefs are pitted against one another in two fierce rounds of competitive cooking using a predetermined list of “secret” ingredients…

The episode with Milwaukee’s local chefs will be titled “Taming and Flaming Wild Boar” and will air on September 27 at 8:00 p.m. The competition takes place at Bartolotta’s Lake Park Bistro and yes, it will feature boar-themed cuisine because, of course, Milwaukee is so well-known for its boars.

A new concept for the Wisconsin-based barbecue chain Famous Dave’s will soon sprout restaurants that focus on delivery instead of dining out.

The restaurant was founded in Hayward, WI in 1994 by Dave Anderson and has since spread its franchises across the country, with more than 150 locations, including nearby in Greenfield and Pleasant Prairie. This new concept will introduce locations that are much smaller than the original dine-out restaurants and offer only delivery and catering services.

The first location with this new concept is being planned for Pasadena, California.

New CEO Jeff Crivello is aiming to use this new concept as a way to increase business for the chain, which hasn’t been up to par recently. Alex Van Abbema from St. Paul Business Journal has more details:

“We launched third-party delivery in the system in August of 2017,” said Geovannie Concepcion, Famous Dave’s (Nasdaq: DAVE) chief operating officer. “Given the overwhelmingly positive incremental sales we saw there, we started to drill down and think, ‘How would this be controlled in a delivery-only environment, and what might that look like?'”

Although there’s no word yet on when one of these new locations will come to Wisconsin, that’s a given, if the new concept takes off for Famous Dave’s.

Shoup has over 30 years of experience in the culinary industry, cooking for venues across the nation and internationally. He hopes to maintain the same menu and atmosphere of the steakhouse, while adding a few new specials and adding more emphasis on local ingredients.

“This place has me really excited about food again,” Shoup noted in a press release regarding his new post. “I have an idea about what Dream Dance is, and new and exciting ideas about what it’s going to be.”

Downtown Waukesha cafe Steaming Cup reopened last Friday after it was caught in a major fire that also affected two other nearby businesses on Tuesday, August 14.

Owners of the coffee shop and cafe Jason and Cristina Tofte announced last week that they would reopen on Friday, August 31 after suffering only minor damages due mostly to the smoke from the fire.

A preliminary damage estimate of $775,000 was released Tuesday, Aug. 28, for a fire that damaged three downtown businesses and injured six firefighters, according to Fire Department officials…

“It has taken time to reopen, but we feel very fortunate that no one was seriously injured in the fire and that we’ve been able to fully restore the interior of the cafe,” said co-owner Cristina Tofte. “We’ve been truly overwhelmed with the amount of support we’ve received from the community throughout the restoration.”

Griddlers Cafe in West Allis recently closed down in July, and now George Webb has reclaimed the property that was once theirs before the cafe took over in 2011.

Griddlers Cafe owners Don and Robb Hensiak announced in July they were closing the restaurant, which had originally replaced the location of George Webb, in order to pursue other opportunities.

Stamm said the restaurant was closed for a few weeks for interior remodeling to bring it back to George Webb standards, such as painting and replacing the equipment and signage.

Though this location is not open 24 hours a day yet like every George Webb, Stamm says they will continue to hire more personnel over the next few months in order to eventually operate all day.