A late and larger Wright, built in 1958, stands out from otherwise bland Bayside. 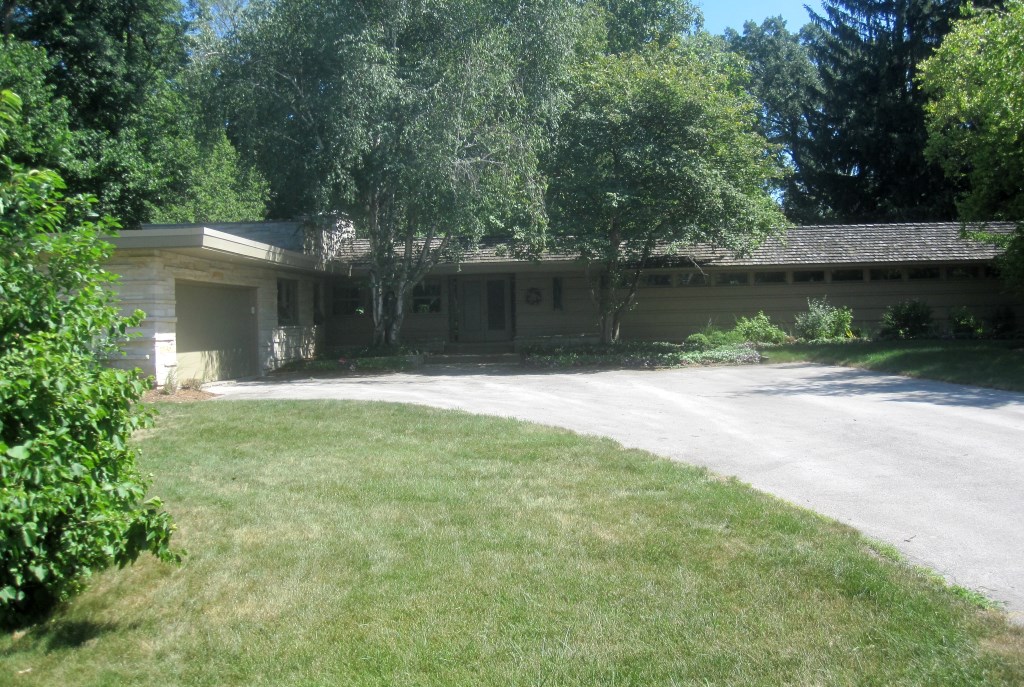 Generally, the landscape and architecture of the Village of Bayside rarely rise beyond the level of the blandly inoffensive. The 2.39 square mile village has a population that hovers around 4,000, and most of the residents occupy single family residences, with the bulk of the housing stock dating from the village’s incorporation in 1953 to the late 1970s. For the most part, this small community at the northeast corner of Milwaukee County (and a tiny bit of the southeast corner of Ozaukee County) is characterized by relatively flat, relatively featureless terrain. Culs de sac are rare, and the streets are generally more connected than would be those in suburbs of later vintage, such as Mequon to the north. A number of the homes are ranches of less than 2,000 square feet. They would not look out of place in northwest or southwest Milwaukee, or Cudahy or West Allis for that matter. But the lots are big — nearly an acre, usually — and were probably cheaper in the 1950s than their counterparts closer to town.

Yet there are exceptions to this general blandness. Bayside enjoys a Lake Michigan shoreline, which enticed early settlers like Jacob Donges and Fred Usinger, who built summer homes, some quite large, like the 5,173-square-foot Usinger home, which remained in the family for generations. In 1911 the Donges and Usinger estates (they were brothers-in-law) were marked with a pebble stone wall and gate surmounted by lions, a feature that remains to this day at the intersection of E. Fairy Chasm Road and N. Lake Drive. Bud Selig so liked the location, he tore down the home next door. Currently, Julia A. Uihlein is constructing a 7,000-square-foot mansion on three lakefront lots. The historic use of most of the sparsely settled community was small cottages and farms. The area was suitable for fruit farming, giving us such later subdivisions as Orchard Highlands, and streets with names like Apple Blossom Lane, Duchess Court, and Jonathan Lane, where one particular house stands out from its conventional neighbors.

In addition to its lakefront, Bayside also shares a rare geographic feature in the form of Fish Creek, a sinuous waterway that drains the otherwise flat terrain of this region where Mequon, Bayside and River Hills come together. Here, rainfall flows east and is deposited directly into the lake some 100 feet below. Donges and Usinger used this feature to name their resort “Fairy Chasm.” The chasm prevents streets from easily connecting, and turns up in unexpected places, like here, where one side of the street has bland, level lots, while the other side features properties perched on steep bluffs, with an ecosystem and vegetation more commonly found in areas much further north.

One of these choice ravine sites attracted the attention of Joseph Mollica in 1956 when the Orchard Highlands Subdivision was organized in the new village. Following the usual preliminaries of chopping down the trees and naming the streets after them, the developer subdivided lots. Mollica chose this site on W. Jonathan Lane for his new home.

Mollica turned to the Marshall Erdman Company, a Madison designer/builder for his prefabricated home. At the beginning of the decade, Marshall Erdman was the contractor for the Unitarian Meeting House in Madison, designed by Frank Lloyd Wright (1867-1959). Wright had long had an interest in modular and prefabricated design. In 1955 he presented Erdman with two prototypical designs for such “Usonian” residences. This, Model #1, was one of nine constructed between 1956 and 1961 at a cost of about $20,000. This residence, with more than 4,000 square feet, is among the larger of Wright homes, thanks in part to a mostly finished basement level that leads out to the ravine. The building kit included windows, trim, and other stock parts, while the owner was responsible for the foundation, the mechanicals — and the paint.

The home sits back on its 3/4 acre lot, the better to kiss the edge of the ravine. The facade, as seen from the street, is a model of restraint. A roof with a low slope runs to the west of the entry, covering the bedroom wing below. The windows, a continuous band, are clerestory, permitting light while allowing for privacy (and furniture placement) for the bedrooms. The east end of the building has a different character. A fine stone wall faces the street here, where an extension pushes the garage closer to the street than the remainder of the home. A flat-roofed masonry structure, anchored by a broad fireplace, holds the kitchen and public rooms of the house. Large windows open to the ravine, providing a sylvan feeling in an otherwise unremarkable yard. The landscaping is recent, and well-tended, except for a maple, quite old, which is showing its age. Maple burns real good in a fireplace.

The home was bought in 2007 for $550,000 by Nicholas Bright Goodhue, a 1960 graduate of Flintridge Prep School, and later Williams College and the UCLA School of Law. (He also has a UCLA MA in Latin.) Goodhue joined the California bar in 1980, but only practiced for a year and a half.

At that point I began doing copy editing work for the University of California Press and have been occupied ever since doing freelance editorial and research work, mostly in the areas of classics, law, and philosophy. In December 2007, Sylvia Ashton and I moved to Bayside, Wisconsin (a suburb of Milwaukee) to take up residence in a Frank Lloyd Wright house that we had bought.

Goodhue’s grandfather, Bertram Grosvenor Goodhue [1869-1924] was the architect of the Rockefeller Chapel at the University of Chicago, and of Nebraska’s 400 foot tall, 15 story State Capitol Building constructed posthumously 1922-1932. More about his work can be found here. 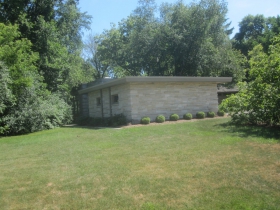 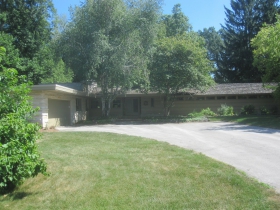 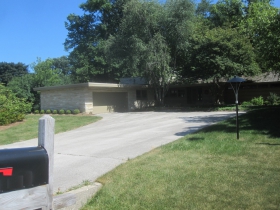 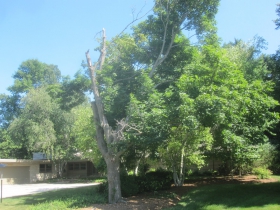 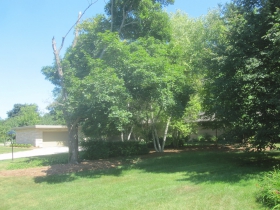