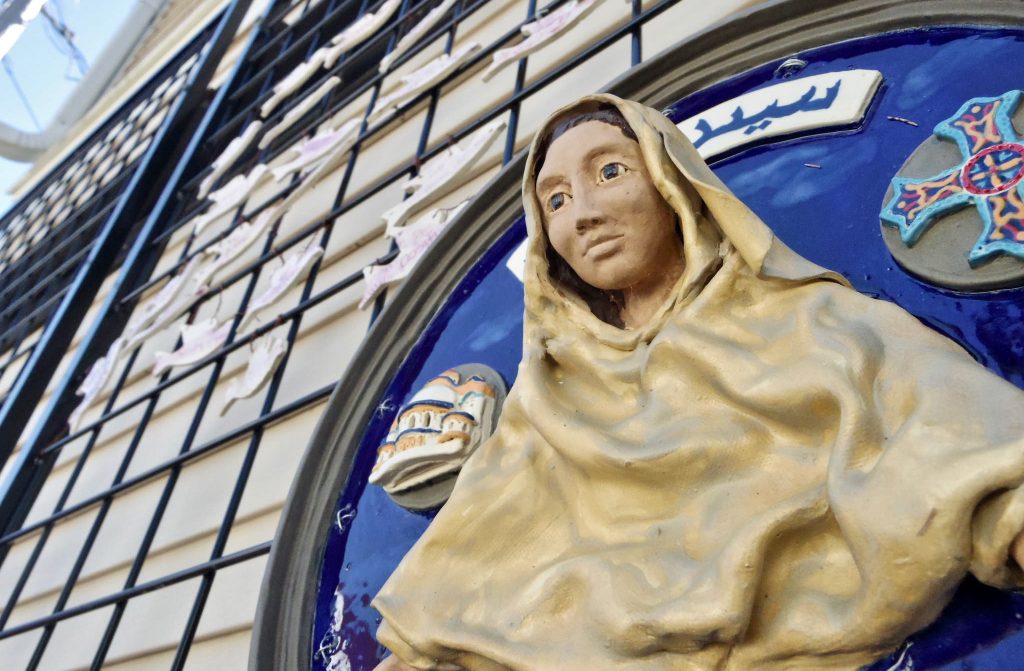 A sculpture of Our Lady of Egypt, created by artist Lori Gramling, is part of a new public art installation in an alley at 26th and Mineral. Photo by Robyn Di Giacinto.

In the quiet alleyway at 26th and Mineral streets behind Tree of Life Earthworks, a new art installation is starting to grow.

Five black wrought-iron trellises seem to have sprung up out of the cracks in the concrete. Two of the panels are already crowded with dozens of tiles covered in children’s scrawl, a multicolored garden of clay roses and doves secured with twisted copper wire.

At the center bloom two larger blue ceramic medallions. The faces of two young women rise off the circles in bas-relief. Their features and clothing are different — yet there is something strikingly similar in their kind eyes and serene smiles.

They are the first two of five planned sculptures of the Virgin Mary from various national and cultural traditions. Lori Gramling, the local artist who runs Tree of Life Earthworks out of her converted carriage house, said she first conceived the idea years ago, as a symbolic guardian for the neighborhood where she has lived and worked for more than a decade.

“Alleys can be a place of danger and of garbage. In a lot of neighborhoods, it’s the place you don’t want to walk in at night,” explained Gramling. “We knew it was important to claim our alleys as our backyards.”

The challenge was to design a project that was feasible and affordable. This winter, inspiration struck: why not use wire to attach individual ceramic pieces to fencing behind her studio? 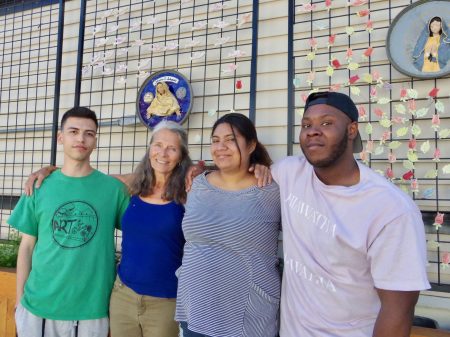 From the beginning, Gramling felt it was important to get Clarke Square residents involved in the project. “It was going to be the voice of our community, not just our voices,” she said.

In her Walls of Strength public art project in 2016, Gramling engaged community members by inviting them to inscribe messages of hope on small ceramic tiles. She adapted this concept for the new installation with three artists-in-residence: Lucas Alamo, 23, Kathy Carlos, 24, and Tray Richardson, 21.

Gramling made the busts while Alamo, Carlos and Richardson cut tiles into small shapes related to the story of each sculpture.

Then, for three weeks in April, they brought the tiles to art classes at the nearby Prince of Peace School, which enrolls children from 4-year-old kindergarten to eighth grade. They invited students to inscribe the tiles with their answers to the following prompt: If you were having a hard day and were walking down the alley, what would make you feel better?

All three artists-in-residence agreed that their students were genuinely excited to participate in the project. Some even asked to do more tiles.

Alamo said that the project has benefited students by encouraging self-discipline, as well as teaching tactile and cognitive skills.

Other lessons have less to do with creating art and more with the relationships formed in the process.

“You put these kids in one room,” Carlos said. “You give them some simple instructions and they get to know each other.”

So far, two of the medallion sculptures have been completed: Our Lady of Egypt and Our Lady of Guadalupe, from Mexico. By fall, the artists hope to add three more figures: Our Lady of Aparecida from Brazil; the Black Madonna, also known as Our Lady of Częstochowa, in Poland; and Our Lady Queen of Peace, a title for the Virgin Mary that’s used across the world.

Gramling hopes that the project, from its subjects to its execution, reflects and celebrates the diversity of the Clarke Square community.

“I think it’s easy to grow up in a neighborhood like this not knowing what you have to give,” said Gramling. “The A student’s, they’re always going to make it…(but) everyone can be a part of this.

“That makes a huge difference in someone’s life. To be seen and heard.”

One thought on “New Art Installation for Clarke Square”