Church House to be Razed

1927 Italian church converted to a home will be replaced by duplex on Lower East Side. 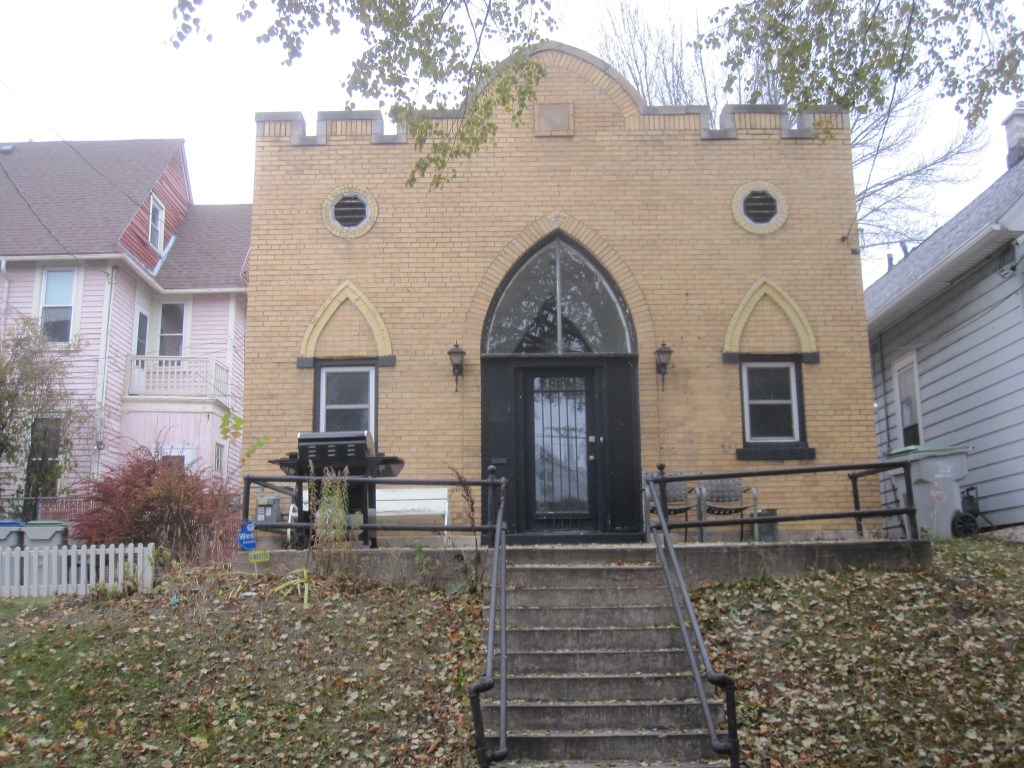 This home will soon be demolished. Photo by Michael Horne.

A 1927 Italian pentecostal church that was converted in this century to one of the city’s more unusual homes is set to be demolished and replaced with a duplex structure. The Lower East Side home on E. Pearson St. was honored in a November, 2017 House Confidential article entitled, “Seriously, Another Church That’s Now a Home?” It is believed to be the first of the 183 homes visited by Urban Milwaukee’s House Confidential to be razed.

The 1,275-square-foot home on its 3,166-square-foot lot was purchased for $165,000 on February 9th, 2018 by Miranda Tushaus, a 2017 Marquette University graduate who serves as a “Sales Enablement Program Specialist” with Rockwell Automation, according to her LinkedIn profile.

On a recent afternoon, the owner was in front of the brick building preparing to mow the lawn in response to a city order to control the weeds on the vacant property. She said that she has a demolition permit pending for the brick structure, adding that there is very little original material in the building to be salvaged. Previous owners cleared the place out, right down to the pews and the wood floor, she says.

The new owner is the daughter of Gregg Tushaus, who describes himself as an “Entrepreneur, Tech Savvy Executive, Digital Advocate and Investor.” He serves on the UW-Milwaukee Research Foundation as its Vice Chair.

Such infill and replacement homes have become more common in the past two decades as the value of property increases in the Brady Street area and the supply of vacant land is dwindling to just a few remaining parcels. New single-family and duplex homes are currently under construction on N. Astor St. (two of them, a block apart) and E. Kane Pl. (three on one block alone).

Although the current building is certainly distinctive, with its Gothic windows and severe facade, it is not otherwise particularly distinguished. It sits on a block that mostly consists of single family homes and duplexes of various vintages and size.

As noted in the November, 2017 House Confidential story:

The building is of unmistakable ecclesiastic origin from the front, which is about the only exposure the structure reveals in this densely packed neighborhood. It has a crenelated false facade on the front, with Gothic arches surmounting the two windows that flank the central entry door, now much modified. A window above the door shows a large light fixture above in the small narthex. This window is a restoration, for the space had been boarded up for decades. Two circular windows provide light for what must be an awfully cramped attic space. The east and west walls are punctuated with windows to admit light into the interior.

As of this writing, no demolition permit has yet been issued. We will follow the construction of the new building as it progresses. 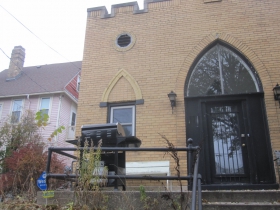 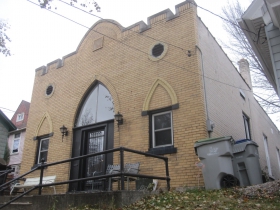 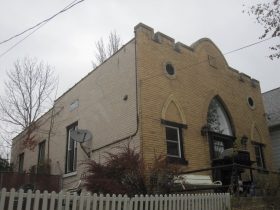 7 thoughts on “Plenty of Horne: Church House to be Razed”