By Rich Kremer, Wisconsin Public Radio - Jul 12th, 2018 01:30 pm
Get a daily rundown of the top stories on Urban Milwaukee 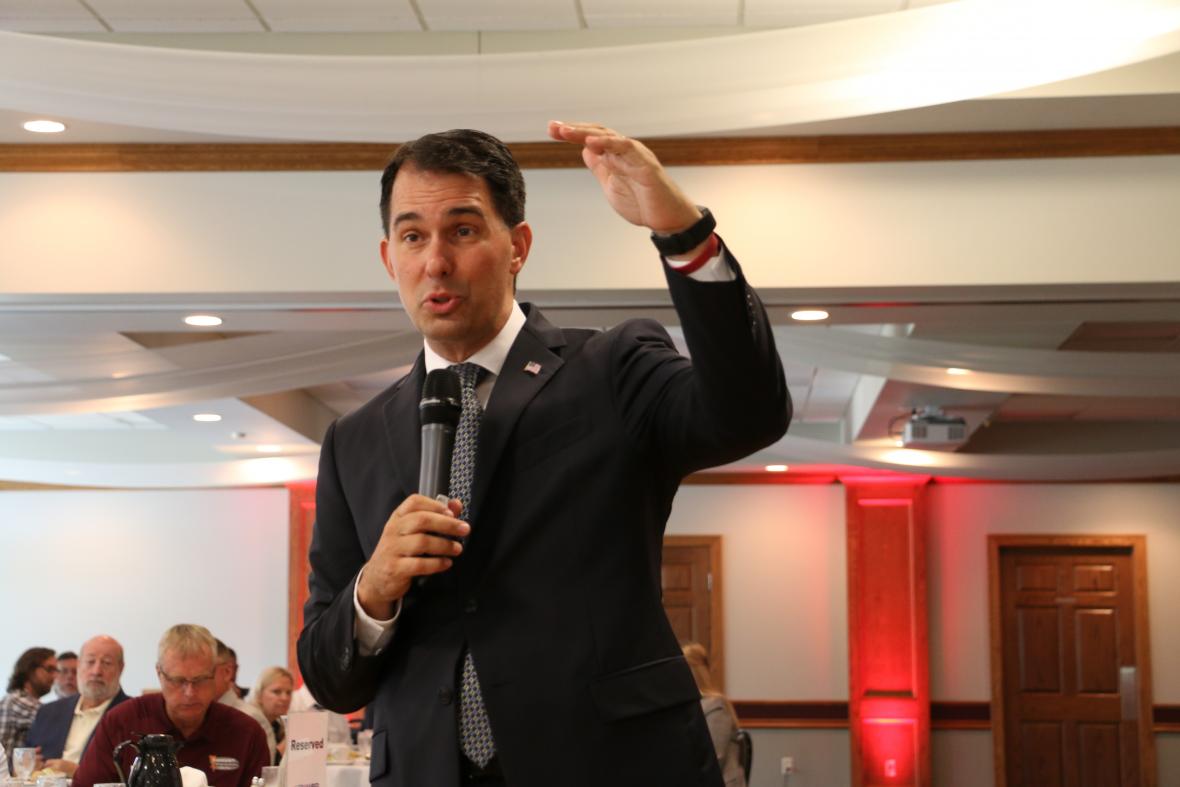 Gov. Scott Walker addresses the Eau Claire Chamber of Commerce Wednesday, July 11, 2018. After his speech he told reporters it was pure speculation to say President Donald Trump’s nomination of Brett Kavanaugh for the U.S. Supreme Court would lead to Roe v. Wade being overturned. Photo by Rich Kremer/WPR.

Speaking to reporters after an Eau Claire Chamber of Commerce luncheon, Walker said Trump’s nominee, U.S. Circuit Court Judge Brett Kavanaugh, is a principled jurist committed to upholding the constitution. But critics worry the pick could tip the nation’s high court in a way that leads to the overturning of the decision that blocked states from banning abortions.

“I think there’s a lot of speculation and this is a guy who part of his experience is he clerked for Justice Kennedy,” said Walker. “So for those who suggest he’s going to be a stark contrast, most clerks are pretty well aligned with the person they clerk for. His track record suggests he’s going to uphold the constitution and if he does that I don’t expect there’ll be major changes.”

Wisconsin has a number of statutes on the books limiting abortion that were voided by Roe v. Wade. But Walker said it would take years for the U.S. Supreme Court to overturn the precedent-setting decision even with a solidly conservative majority.

“My guess is the one thing that seems pretty clear is that anything like that wouldn’t happen immediately,” said Walker. “You’re talking years. So, probably any sort of change wouldn’t have any impact for me and other state officials until long after the term I’m running for is over.”

Democrats and abortion rights supporters in Wisconsin are condemning Kavanaugh’s nomination to the Supreme Court.

“If he is not blocked, Brett Kavanaugh will be the deciding vote to overturn Roe v. Wade and do what Scott Walker has been trying to do for 25 years: criminalize women having abortions,” said Analiese Eicher of the liberal advocacy group One Wisconsin Now.

Democratic gubernatorial candidate Kelda Roys, who is a past head of NARAL Pro-Choice Wisconsin, said Kavanaugh will be a “rubber-stamp” for Trump.

“This Supreme Court vacancy, and Trump’s pledge to appoint anti-choice justices, poses the clearest threat to reproductive rights in decades,” said Roys. “This appointment underscores the importance of electing a governor with a strong track record of championing women’s health. I have that record, and I have pledged to pardon anyone charged under Wisconsin’s current abortion ban, which will go into effect immediately if Roe is overturned.”