The Plague of Bail Jumping Charges

134% increase in such charges in state since 2000 may force innocent people to plead guilty.

By Gretchen Schuldt, Wisconsin Justice Initiative - Jul 12th, 2018 03:16 pm
Get a daily rundown of the top stories on Urban Milwaukee

The number of criminal bail jumping charges resolved in the state jumped 134 percent from 2000 to 2016 and the number of those charges dismissed soared 170 percent, according to a new Wisconsin Law Review paper.

In 2000, bail jumping accounted for 7 percent of criminal charges adjudicated in the state; in 2016, that figure was 17 percent.

The data suggest that bail jumping charges are used to induce defendants “to plead to their original charge rather than to punish them for violating their bond conditions,” Amy Johnson wrote in “The Use of Wisconsin’s Bail Jumping Statute: A Legal and Quantitative Analysis.”

Johnson’s conclusion, buttressed by her quantitative findings, is something that defense lawyers also have argued based on their courtroom experiences.

The 74 percent figure “is particularly informative considering that for all other fully adjudicated charges in 2016 the percentage dismissed was a significantly lower 47.32% (61,852 of 130,713 charges),” Johnson wrote. 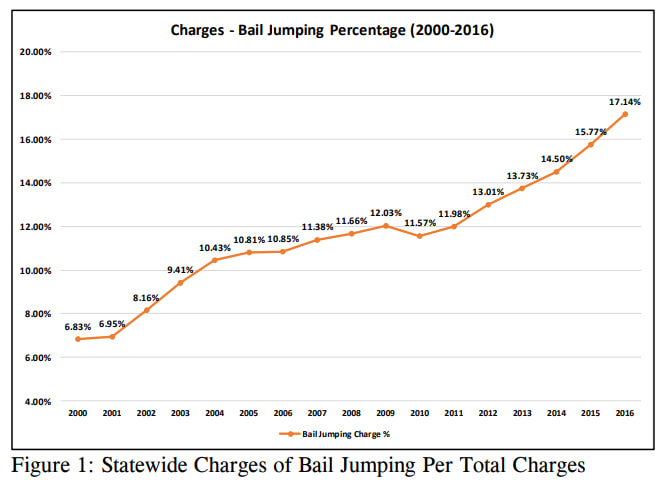 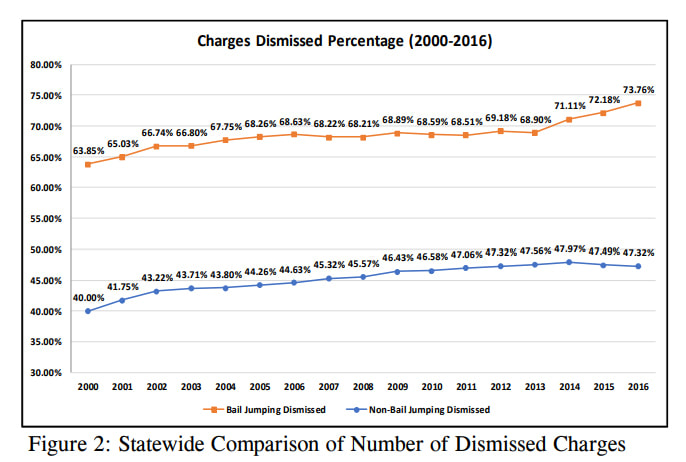 Johnson’s paper, published as a comment, called for state courts to embrace reforms that “prevents extreme numbers of bail jumping charges. Doing so would reduce the leverage effect that prosecutors have without eliminating it entirely.”

The courts’ past and current interpretations of the bail jumping statute has “led to an increase in bail jumping charges, absurd consequences, and potential sentences to the charged crimes,” she wrote. “The result is that defendants are at a marked disadvantage when negotiating plea deals.”

The Wisconsin Supreme Court, for example, has held that a defendant can be charged with multiple counts of bail jumping for violating a single bond. Johnson, as an example cited the example of a J.E., a composite of clients in actual cases she worked on during a 2016 legal internship.

J.E., she said, is an alcoholic homeless man who got into a disturbance with another man on Madison’s State Street. Both men were charged with disorderly conduct; both admitted to being under the influence of alcohol. J.E. was granted a signature bond, but as conditions of that bond, was ordered to maintain absolute sobriety and to stay away from State Street.

A few weeks later police arrested an intoxicated J.E. on State Street. He was charged with two counts of misdemeanor bail jumping.

J.E.’s potential imprisonment suddenly jumped from a maximum of three months to a maximum of 21 months, Johnson wrote.

Johnson graduated this spring from the University of Wisconsin Law School. Before she enrolled, she was an IT project manager and analyst for more than 20 years. During that time,  she managed large software projects and gained considerable experience analyzing data.

She said she got interested in the bail jumping topic when she read a State Supreme Court bail jumping decision, State v. Anderson. The court held that it was fine and dandy to issue multiple criminal charges for multiple violations of a single bond. In her paper, Johnson said that then-Justice Janine Geske, in a dissent, “points out a variety of scenarios where a detailed set of bond conditions that are violated could result in punishments that far exceed the initial crime.”

She continued: “This seems particularly outrageous when many conceivable conditions, like not drinking or not being in a certain area of town, are not criminal acts in and of themselves. A defendant with one criminal felony count could end up with punishment for violating bail conditions that far exceed the punishment for the crime itself.”

Geske’s dissent, Johnson said in an email, “rang very true based my anecdotal observations while working with clients that had bail jumping charges. I was curious about whether she was right or not.”

Johnson’s planned paper “turned into a research project that took hundreds of hours,” she said.

That changed dramatically by 2016. 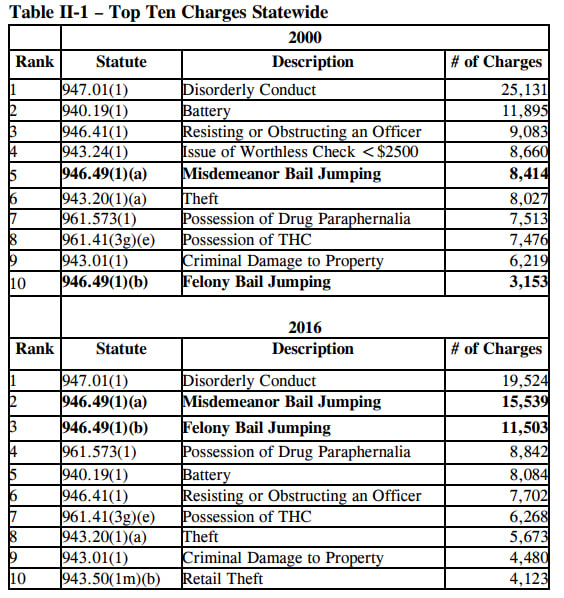 The number of cases with multiple bail jumping counts loaded on to them also have increased,  Johnson wrote.

“Were Justice Geske’s assertions in her dissent in Anderson correct?” Johnson wrote. “Has the bail jumping statute and its interpretations resulted in a large number of bail jumping charges and an excessive exposure to penalties? The CCAP data suggests that she was indeed correct.”

7 thoughts on “Court Watch: The Plague of Bail Jumping Charges”