The Return of the Elk

How Wisconsin, Michigan have reintroduced and started hunting seasons for elk. 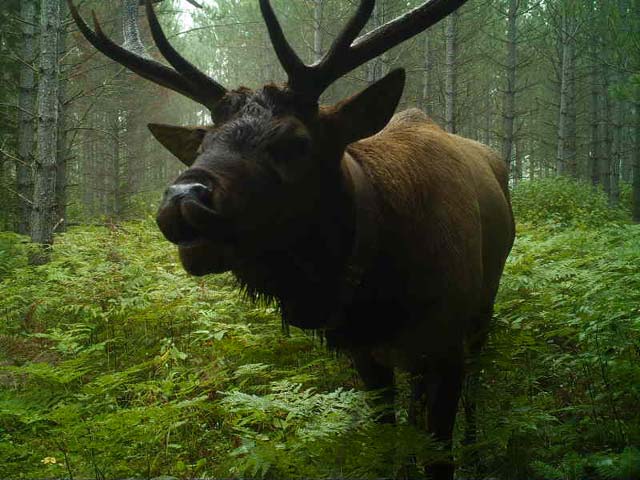 Michigan celebrates a century since the state began herd restoration. In Wisconsin, the state will hold its first elk hunt.

Elk are native to the Great Lakes region, but herds were lost to hunting and habitat decline in the 1800s. Today’s herds are the result of successful reintroduction, wildlife officials in both states said.

Michigan elk restoration began in 1918 when seven Rocky Mountain elk were relocated to Wolverine, north of Gaylord. The herd is now the largest reintroduced herd in the Great Lakes region.

The Michigan Department of Natural Resources (DNR) maintains about 900 elk on 105,000 acres in the Pigeon River Country State Forest near Gaylord, according to Brian Mastenbrook, a wildlife field operations manager for the Michigan DNR.

Michigan introduced “elk-edition” wildlife license plates this year to celebrate the centennial. Plate sales raise about $40 million a year for wildlife and land conservation, according to the Michigan Wildlife Council.

Mastenbrook said the centennial also highlights public education and touts the success of the program.

“The reason that we like to talk about elk — and that’s what the 100-year thing is … people aren’t all aware of elk in Michigan,” he said. “And so this is part of a multifaceted effort to get people to know about elk and appreciate elk and wildlife management. That’s the big picture.”

Though the herd may seem small, Mastenbrook said its size and location are ideal. The area’s aspen provide a primary source of food, and the management area limits crop damage and collisions with vehicles. The DNR is about 90 percent successful in keeping elk within the range, Mastenbrook said.

Full-grown elk can reach 900 pounds, which is about three to four times heavier than a large white-tailed deer.

“Most people are happy with elk in the Pigeon River — not many of them want elk outside,” he said. “Even the agricultural people say, ‘We like elk, we just want them to stay where they should stay. We don’t want them all over the place.’”

Michigan holds yearly elk hunts. About 36,000 hunters compete for about 100 licenses in the DNR drawing.

“Big animals tend to roam. That’s just what they do,” he said. “There are a few bands on the outskirts that once they get big enough, hunters will get to them, because our population control is hunting.”

Wisconsin has more than 200 elk in the Clan Lake area in the north-central part of the state, said Kevin Wallenfang, a deer and elk ecologist for the state’s DNR. Wildlife officials expect the number to increase by 20 to 30 by the end of calving season this summer. The program’s long-term goal is 1,400 elk.

Wallenfang, who has worked with the Wisconsin DNR since the first elk were brought from Michigan in the 1990s, said collaboration between the states helped Wisconsin reach the milestone.

“I think that it is really neat that we are having our first hunt in the same year that Michigan is celebrating their 100-year anniversary of having elk in the state,” he said. Michigan was in it from the get-go, was a major partner, and we are very grateful for that.”

Wallenfang said Wisconsin overcame hurdles in having enough elk to offer hunting. For example, the state lost 20 percent of its herd during a harsh winter five years ago.

“We’ve overcome that hump and we are on to the next phase, so we are pretty excited about that,” he said.

More than 38,000 hopeful hunters have paid $10 each for a chance at four licenses, Wallenfang said. Seven dollars from each application goes to elk research and management.

Eligible hunters will have to pay additional fees for a license.

Officials in both states said the extra attention on elk this year can also boost awareness beyond hunting.

“The hunt has done a lot of good for us as far as making people aware that we have an elk reintroduction in Wisconsin,” Wallenfang said. A lot of people weren’t even aware of it, despite being out there for over 20 years, so it’s done us a lot of good as far as educating the public.”

Cindy St. Germain of the Indian River, Michigan, Chamber of Commerce said she hands out maps and provides information daily to people who visit the chamber office where she works as an administrative assistant.

“It’s one of those experiences that it is nature, and you have to get out there and go, and be persistent. Local people do that, and they get to see them,” she said. “You can drive to these different locations and you can park there and watch them and they are absolutely spectacular, especially if you can catch a glimpse of the calves and the big bulls.”

There are also online elk viewing guides and maps for Michigan and Wisconsin.

The best time to see elk is during breeding season in the fall, St. Germain said. But locals also search for shed antlers during spring.

Pennsylvania and Minnesota have also reintroduced elk and hold annual hunts through an application process.